Venustus Cichlid (Nimbochromis venustus) also known as Giraffe Cichlid is a popular aquarium cichlid species. It is a large fish, which can grow up to the size of 11 inches inside an aquarium.

It is high in demand by hobbyist aquarium keepers because of its unique color patterns and its interesting behavior.

It is commonly kept in larger tanks and is a cichlid lover’s favorite. With the rise in commercial breeding of the Venustus cichlid, the breed is easily available, although it is quite hard to find the fish in the wild.

Venustus cichlids have a lifespan of a maximum of ten years under proper care and grow to a height of up to 25 cm or ten inches. When kept in an aquarium, this size is recorded to be even larger. 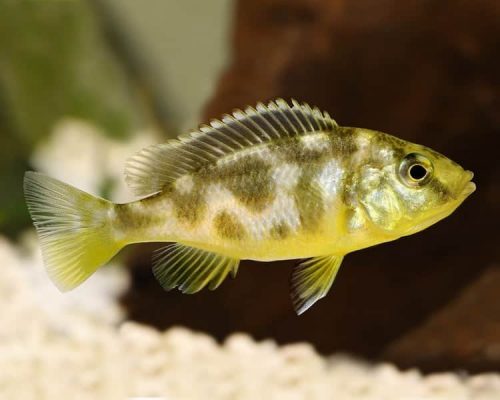 The Venustus cichlids have a large mouth and an elongated body. They have a yellow body with patches of brown over them.

The male develops a blue face and head around a solid gold body as it grows. The brown patterns over the body of the Venustus cichlid have given it the name of giraffe cichlid or simply the giraffe hap.

The juveniles have a similar appearance to the females, except that the background is much lighter which gives an almost silver-white appearance.

Like some saltwater fish like the parrotfish and wrasses, all cichlids have a common feature, which is another set of pharyngeal teeth in the throat along with their regular set of teeth.

The fin of the Venustus cichlid is designed for smooth and precise movements rather than fast swimming.

A unique feature of the Venustus cichlids is that they have a single set of nostrils rather than the two which is in all the other fish types.

To smell the odor of the water, this fish sucks the water in and samples it. 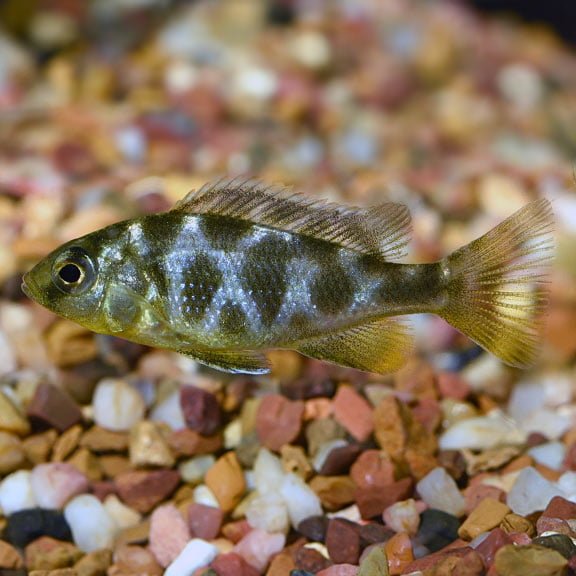 This sample is then released back out after the fish has understood the smell of the water. The feature is also present in other saltwater damselfish, which relates them to the cichlids.

The Venustus cichlids are mainly endemic to Lake Malombe and Lake Malawi. This species of fish is listed as Least Concern (LC) in the IUCN Red List.

Although there are not many threats that have been recognized by marine experts in the area, the Venustus cichlids have experienced a decline in their population.

The only possible reason for this points to trawl fishing that is carried out in the area around the southern region of Lake Malawi.

This fish should be ideally kept in large water tanks which can hold 75 gallons of water or more as, like most African cichlids, the Venustus cichlid also prefers swimming in large areas rather than confined spaces.

The tanks should have a fine sand substrate with natural caves, pipes, shelters, and rocks. If plants are being put in the tank, they should be tied down to rocks or driftwood or else they would just be floating about due to the fine sand substrate.

Due to the size of the Venustus cichlid, the tank requires mechanized and chemical filtration systems to maintain a healthy habitat for the fish.

The Venustus cichlid is considered to be a peaceful species, but it does tend towards being very aggressive occasionally.

Although it can coexist with other like-minded species, it is advised to keep the tank large as the males become aggressive with their kinds during spawning in cramped tanks.

Therefore, for tanks containing more than one male Venustus cichlid, the ideal size recommended is 150 gallons or more. 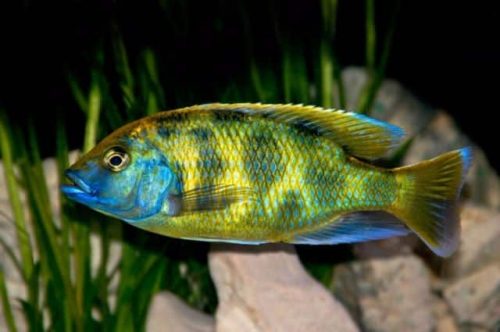 This fish does reasonably well in both freshwater and brackish waters. However, it requires water movements along with a strong water filtration system.

It is to be noted that the Venustus cichlid requires slightly alkaline water, ideally at pH level 8.

Tank care is crucial for the Venustus cichlid. The water needs to be changed every week. This further depends on the bioload of the tank as the ideal level of water change is 10-20% a week.

The Venustus cichlids are an omnivorous breed of fish, but since they mainly feed on fish in the wild, they can also be considered piscivore.

Since this fish is a predatory piscivore, it can eat vegetables occasionally but would usually stalk and eat small fish as a major portion of its diet.

In a tank or aquarium, the Venustus cichlids grow best on a protein-based diet where they can be fed several foods including pellets, frozen or fresh foods, frozen dried kill or any other high-quality foods that are fed to piscivores. 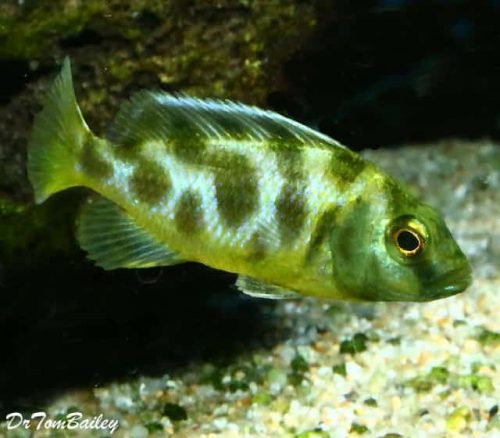 Since feeder fish and feed mysis can trigger aggressive hunting behavior among fish, these two should be fed very occasionally.

The Venustus cichlid also requires some plant-based food to maintain a balanced diet.

The juvenile Venustus cichlid can be fed flake when they are 3 to 4 inches long, but if they are larger, feeding flakes to them can be messy and pollute the water. Ideally, adults should be fed frozen food twice in seven days.

It is to be carefully noted that the fish are not overfed as they would eat until their stomachs are distended. The feeding frequency should be daily for juveniles but two to three times a week for the adult Venustus cichlid.

This fish has a unique ambush technique, which it uses to eat weaker prey such as invertebrates and small fish. It buries itself in the sand and catches small fish as they swim by. Due to its eating habits, the Venustus cichlid is large.

The Venustus cichlids are said to form a matriarchal family, and the male would mate with a large number of females as they have a polygamous nature.

The females lay their eggs on flat slates or stones. You should be careful not to place these breeding sites close to any strong water flows as the eggs are fertilized externally. 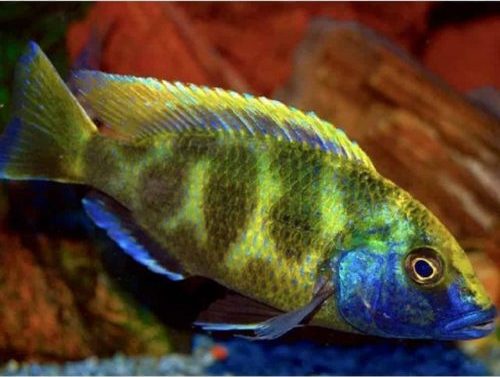 It is advised that since the Venustus cichlids are bred in captivity, you should get a group of six to eight juvenile fishes so that they can grow together at the same rate.

The females are mouthbrooders, which means that they will pick up their eggs and keep them in their mouths for incubation.

The female Venustus cichlid can carry between 60 and 120 eggs in her mouth for over a month and can even let the hatched fry stay in the mouth for around ten days. After this, the juveniles grow by themselves.

Although the female can keep the eggs in her mouth for about two weeks, you may have to incubate the eggs for thirteen days by removing all the eggs a few days after spawning.

As mentioned before, the Venustus cichlids are considered a peaceful community fish, but they have high tendencies of being aggressive predators.

According to aquarists and experts, improper housing and spacing in the tank may lead to agitated behavior in the fish, which may result in the fish displaying its aggressive characteristics. 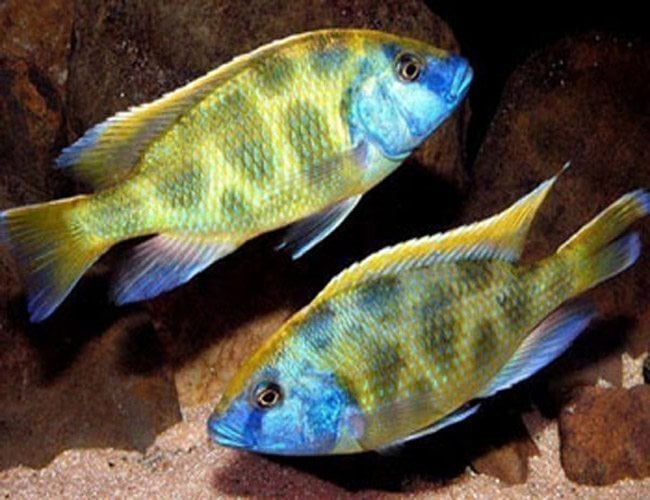 The ideal grouping of the Venustus cichlid is one male and several females or else the male would kill other males if the tank is not large enough. It is advised not to put these cichlids with other peaceful cichlids.

The Venustus cichlids are sensitive to quality feed. Failure to meet this requirement may result in the Malawi Bloat, which is a common disease in this specific breed of fish.

As with other cichlids, ich is also a common disease with the Venustus cichlid. This disease can be cured by increasing the water temperature of the tank for three days and maintaining it at 30°C.

if this does not resolve the issue, the water needs to be treated with copper, but before that, all previously added water conditioners need to be removed.

Also, you need to be careful when adding copper to the water and only do it as directed by the manufacturer.