Types Of Goldfish – 10+ Awesome Goldfish Types: – As if descended from the pages of a fairy tale, Goldfish is popular as an aquarium inhabitant.

There are many types of goldfish that differ in appearance and size.

Goldfish also are known as Carassius auratus come in with some more or less significant differences between themselves. For example, with a long laterally compressed or rounded body.

Interestingly, body shape is associated with life expectancy. Rounded fish live only 15 years, while elongated fish may live for as much as 40 years. They grow in length from 15 to 45 cm.

Some goldfishes have large scales, while others have small scales and are even absent in some areas. All have large gill covers, pharyngeal teeth, hard notches on the rays forming fins, and large eyes with varying degrees of the bulge.

Depending on the breed, fish vary in color. It can be represented in shades of red, pink, bronze, yellow, blue, and even black. A feature of all fish of this species is a lighter abdomen, compared with the main color.

Varieties of goldfish and the shape of the swimming organs are distinguished. Some representatives have the usual bifurcated tail, while others have it long and fluttering like a veil. The same goes for the fins.

About 300 breeds of goldfish have been bred. Each has its own characteristics that distinguish it from the rest.

They live in aquariums or open artificial ponds but the latter case is possible only in warm regions where the temperature does not fall below 15 degrees Celsius.

Let’s Begin with the popular types of Goldfish.

A commonly found fish in home aquariums and artificial open ponds. The shape of her body is elongated, the maximum length during life in a pond is 30–45 cm and a tail adds another 10 cm. The abdomen and chest fins are rounded; the scales are orange or red-white. 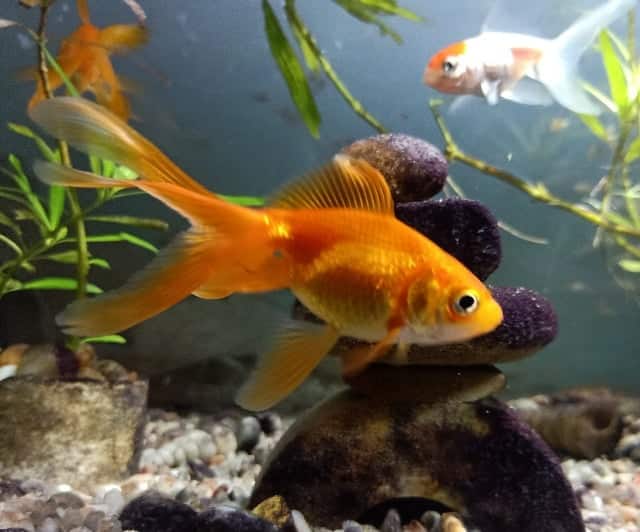 The comet belongs to the fast-moving and active aquarium inhabitants. Their 18-centimeter body is elongated and ends 3-4 times larger than its tail.

It has longer fins and a tail, which in some representatives may be a veil. The eyes of the fish are bright red, and the tail is lemon yellow.

These species are well-deserved, but there are more extravagant representatives. 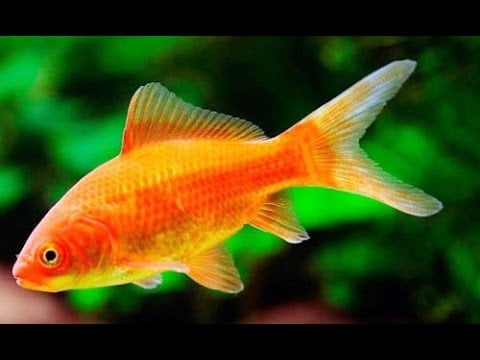 This goldfish is named after the bifurcated tail fin, similar to the wings of a butterfly in a straightened state.

The breed was obtained as a result of a long selection, experiments are carried out to this day, now breeders are trying to create a fish with a long tail.

The maximum length of the bred representatives is 20 cm. They differ in color among themselves, it can be monophonic or combine red, orange, white, black, silver shades. 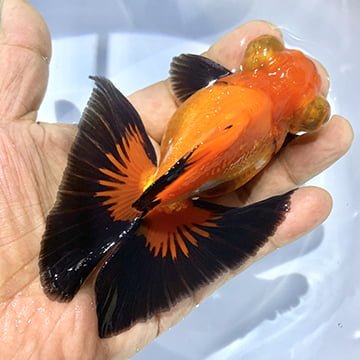 Butterfly Tail Goldfishes do not live in reservoirs, They can easily tolerate cool water in the aquarium but they need additional aeration, so this type of compressor is indispensable.

In addition, for it, you need to carefully select the neighbors since aggressive fish can ruin a handsome tail or even suck out his eyes.

A very unusual fish, characterized by a short egg-shaped body and a large head, covered with velvety growths resembling a lion’s mane. The lion head has no dorsal fin, but there is a bifurcated tail, raised up. 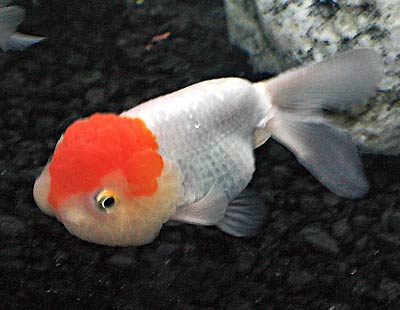 A 15-centimeter body is covered with large scales of plain orange, red, white, black, or a combination of 2-3 colors. The head and fins of all representatives are bright red.

They look like a lion head in the shape and size of the body and swimming organs, the absence of a dorsal fin, growths on the head, and the color of the scales. But the ranchu is not without its own characteristics.

So, among them, there are spotted representatives and fish with the bright coloring of certain parts of the body (fins, nose, gill covers, tail) and a colorless body.

In addition, in this breed, the spinal column is curved at the end, and the triangular tail is formed from two fused fins. 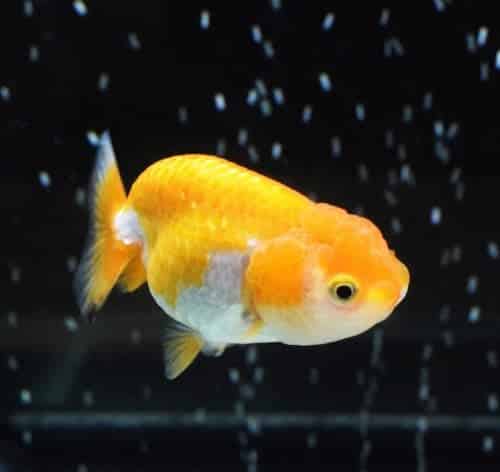 It must be remembered that the growths that give the fish a unique appearance are very delicate, so it is important to ensure that other aquarium inhabitants do not spoil them.

One of the most beautiful fish with a calm character. She has a spherical body 20 cm long, into which a small head smoothly passes with large bright eyes of different colors, except for green. 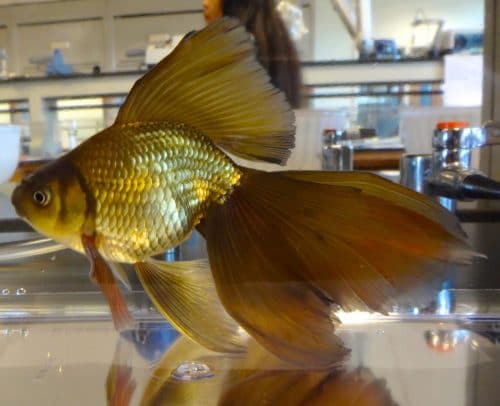 As the name implies, the most remarkable part of the fish is a magnificent tail that exceeds the length of the body. It can resemble a ribbon or a skirt. The color of the breed varies from red-gold to plain black.

It’s a close relative of the Veiltail goldfish but a little large in its species. The appearance of growths on the head and gill covers differs, creating the effect of a big hat.

The oranda is large, its length can exceed 26 cm. All its fins are hanging and bifurcated, except for the unpaired dorsal. The barrel-shaped body ends with a long tail, to which strict pedigree requirements are imposed. 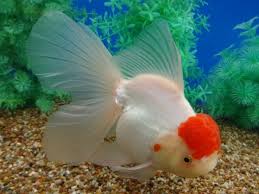 It should be in the shape of a skirt, but not forked. The color of this fish may be different: white, yellow, blue, red, gray, black, or spotted.

By contrast, It is considered the prototype of the veiltail goldfish. Compared to the rest of the family, these fish are more thermophilic and slow.

Their characteristic curvature of the spinal column leads to the fact that the 20-centimeter body has a spherical shape with a high back. The head and eyes are large, the long tail has a forked end, the dorsal fin is set vertically. 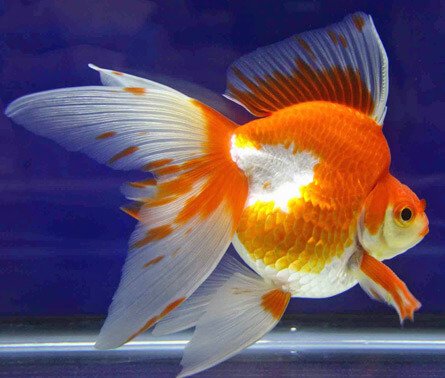 Different representatives within the same breed differ in the length of the swimming organs and colors, which can be red, orange, white, pink, or motley.

Beautiful tails, of course, look very attractive, but can also cause troubles, because they can be easily hurt. Choose tankmates wisely!

A telescope goldfish is a fish with elongated fins and a short body, which is covered with plain or colorful scales. There are also representatives deprived of these small records. 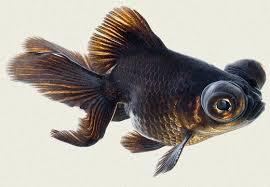 The main decoration of the telescope is the huge eyes of a spherical, cylindrical or conical shape, which can reach 5 cm in diameter. The organs of vision can be directed in different directions or up, in the latter case, the fish are called stargazers.

A fish with large organs of vision. But the name of the fish is not associated with them. Representatives of the breed near the eyes grow fluid-filled bubbles reaching 4 cm in diameter. And this is with a body length of 15–18 cm. 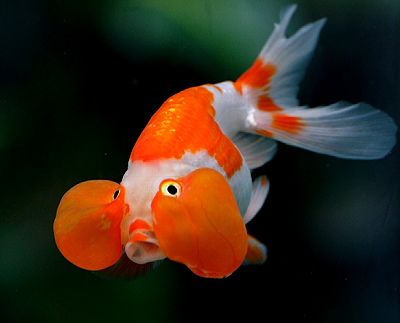 Among other signs of a vesicle, there is an ovoid body, a head smoothly passing into the back, lack of a dorsal fin, and uniform color, rarely with spots of a contrasting color.

A fish that received its tender name for a convex scale resembling a cut pearl. If small pearlescent plates are damaged, the newly grown scales lose their original shape.

The monophonic body of the representatives is slightly swollen, the lateral and pectoral fins are short. In the vast majority of cases, the color is solid orange, red or white, but tricolor pearls are also bred. 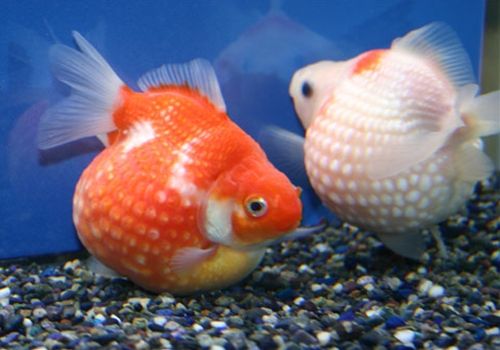 Despite the intraspecific differences, care for all members of the family requires approximately the same.

Choose a tank in which the fish will live, you need, starting from their quantity and size. Large individuals are kept separate from small ones in a large aquarium with a volume of about 200 liters.

If there is no desire or opportunity to acquire such a large capacity, you can limit yourself to a smaller volume, but remember that for every fish in the aquarium there should be at least 2 liters of water. The most convenient form of the tank is wide and rectangular, with walls not exceeding 0.7 m in height.

As for the water for the aquarium, it must meet several requirements:

To keep your environment at an optimal level, you may need an automatic water heater and compressor unit to saturate the water with oxygen.

You can decorate the aquarium with plants with hard leaves (pets will eat around the delicate shoots). The choice of stones, shells, or snags should be approached with caution. Since fish can get hurt about them, it is better not to use them at all.

GoldFish are fed twice a day at the same time with live protein feed and plant foods. Sometimes you can give finely chopped vegetables and seafood, grated cereals, and pulp of bread.

You should not get involved in dry food from a pet store. It is very convenient to use, but with prolonged use, it reduces immunity and generally harms the health of pets.

Too much food should not be given, it should be completely eaten in 10 minutes. If, after the indicated time, food residues are present in the water, they must be removed.

It is impossible to keep one fish at a time, since they are schooling creatures, and they cannot stand loneliness, as well as they do not get along well with all the neighbors.

Slow species will starve in the presence of more agile competitors, and too unusual in appearance (with a veil tail or bubbles) can be crippled.

Therefore, it is best to keep fish with your own kind or koi carps. If you still want to buy different species and keep them in the same aquarium, you can try to hook up Clown Loach, Gourami Fish or pleco fish.