Tropheus Duboisi Cichlid, also known as White Spotted Cichlid, is a graceful cichlid who lives in the rocky coastal part of the African Lake Tanganyika.

Currently, it is listed in the Red Book of the Union for Conservation of Nature with the status of status “V.U.” (vulnerable).

Tropheus Duboisi Cichlid received its name White Spotted Cichlid due to its unusual color, which is different in young and adult individuals.

For the first time, these fish were presented at an exhibition in Germany, where they made a splash and became a bestseller. 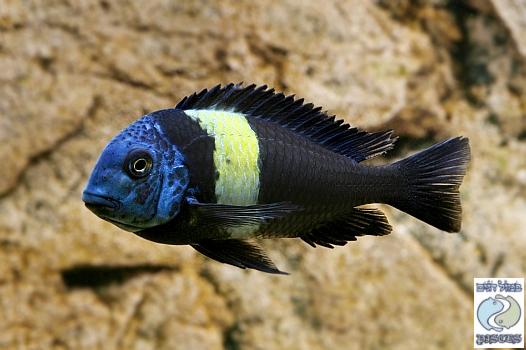 Tropheus Duboisi, also known as White Spotted Cichlid, is a graceful fish with a large head and a disproportionately small body. Its length does not exceed 12 cm. In the homeland, Tropheus swims among the rocks and hides in caves.

It feeds on algae and small invertebrates that live on the surface of stones. There is not too much vegetation in these places, and the fish have to move a lot to find food.

Under natural conditions, Tropheus prefers to live alone and occasionally you might see them in pairs. These cichlids were first described in the fifties of the 20th century by the scientific ichthyologist M.J. Marlier, who at that time studied the fauna of Lake Tanganyika. These fish are endemic to the lake; they no longer live anywhere in the world.

In young individuals, the coloring of the torso is very spectacular – black with white and blue polka dots.

With age, it gradually changes: black color and white spots disappear, and colored stripes appear on the case. Because of these differences, fish of different ages seem to be separate species.

The heads of adult Tropheus Duboisi are black or blue, the back of the trunk and tail are dark blue or black.

In the middle is a bright yellow stripe that stands out sharply against the main background. There are several types of Tropheus Duboisi, but all have this contrasting streak.

Sexual dimorphism in fish is not pronounced. Males have a more upturned nose and a bright color. Females are slightly lighter than males and grow slower. In natural conditions, the population of Tropheus is small; although they are not commercial fish, in the last century, a massive number of Tropheus Duboisi cichlids were caught due to the high demand from aquarists.

Tropheus Duboisi is quite aggressive fish. Although it is believed that they show less aggression than other cichlids, they are usually kept in a separate same species aquarium.

A large number of females is necessary to distribute male aggression. New individuals should not be placed in the formed group, as this will lead to fights and the death of newcomers.

A 100-liter tank can contain a group of 10 fish and out of all that there should be 1 male and other females. If the group consists of 15−20 individuals then keep two males. Also, the volume of the aquarium should be at least 250-300 liters. 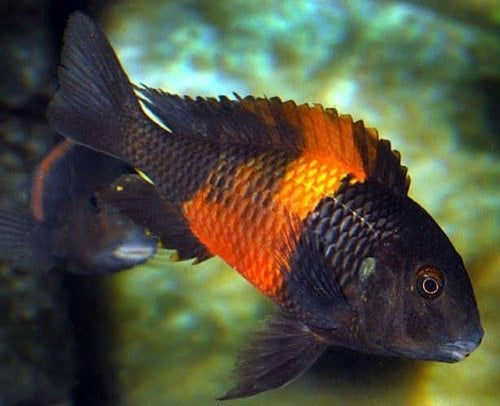 The quality of the water in the aquarium is of great importance for keeping fish.

Under natural conditions, they live in clean, oxygenated lake waters with stable parameters, and even small deviations from natural conditions can lead to their illness and death. This is the main difficulty in keeping trophies.

The following parameters will be optimal for them:

Water hardness can be increased with pieces of marble or limestone placed at the bottom. The content of nitrites and nitrates should be low – cichlids tolerate their increased content very poorly.

Powerful filters with high performance, including biological ones, are installed in the aquarium. Water should be replaced twice a week by no more than 15%.

Replacement must be done very carefully. The aquarium is equipped with intensive aeration. 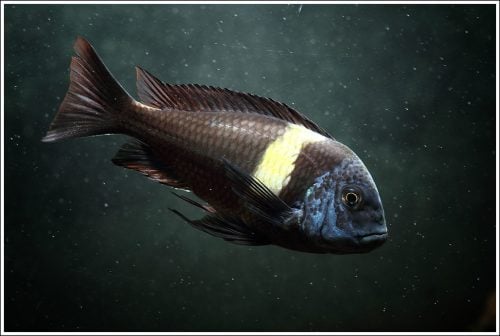 Many experienced aquarists control water quality with the help of individual tests, the results of which are graphs.

Even the smallest deviation from the optimal parameters is harmful to the fish. Thus, a drop in temperature of only 2 degrees causes a cold in Tropheus duboisi, from which they die.

Aquarium Base For Tropheus Duboisi

Soil does not matter much. It can be chosen so that it fits the overall design of the aquarium. It can be coarse sand or pebbles. Vegetation is not required much. It is advisable to choose hard-leaved species of algae.

In the aquarium, you need to install many shelters. It can be caverns, caves, snags. They should be more than the number of fish at least one shelter.

Lighting should be such that its intensity promotes the growth of algae – no other requirements.

Tropheus duboisi cichlid eats the plant and animal foods. As a source of protein, they are given daphnia and artemia.

They are also fed with Spirulina algae in granules and flakes, which should be pre-soaked so as not to cause increased gas formation in the fish.

Some aquarists give fish the following food:

Such food should be given with caution, as it causes bloating in Tropheus duboisi. Food should be presented in a small quantity and three times a day.

Usually, the fish will catch the food “on the fly” and do not allows it to sink to the bottom. Reproduction in captivity is not particularly difficult. Usually, a group of fry is launched into the aquarium, and males are planted as they grow older.

Fish become sexually mature at the age of 10-14 months. As a stimulant for spawning, you can use frequent water changes. It is not necessary to plant the formed pairs in a spawning ground.

Before spawning, the male digs a hole in the ground. The female throws several eggs in this hole, on the wall of the aquarium or a flat stone, and then picks them up in her mouth. Then she swims to the male and takes his milk into his mouth.

Female does this several times until the number of eggs reaches about 30 pieces. Then the female hides in a previously chosen shelter. It contains eggs and subsequently hatched fry in the mouth for three to four weeks, sometimes releasing them for a walk.

She does not leave them, even when they begin to swim on their own and protect the offspring until the fry is older. Starter food for juveniles is “live dust.”

If Tropheus Duboisi Cichlid is kept in a typical aquarium, then they should not be kept with very small or slow fish, which they can eat or injure.

They can be kept together with these types:

To reduce the aggression of males, small, agile fish are launched into the aquarium; for example, it can be a fast-moving neon iris. The male will chase after her, but will not be able to catch up.

Tropheus are fantastic fish. It is fascinating to watch how the star-like coloring of juveniles gradually changes to striped in adult fish.

If you strictly follow the rules of detention, Tropheus will delight their hosts with beauty and funny behavior for a long time.