In recent years, freshwater nano-aquariums have become increasingly popular. However, lovers of large fish have not gone anywhere. Of course, there are difficulties in keeping large or even giant fish, but they more than pay off with the entertainment of show aquariums!

Most often, such aquariums belong to aquariums and zoos, but, of course, aquariums for several tons of water are also kept in apartments and in country houses.

Show aquariums are a whole underwater world with very large and unusual looking fishes. You must decorate such aquariums according to the preferences of the specific fish you are keeping in it. However, one rule remains unchanged for all inhabitants – any decor should be firmly done!

Filtration of such aquariums is always at the highest level: giant fish eat a lot and secrete a large number of waste products.

We have selected some of the largest and most aquarium fishes popular among aquarists. Their juveniles can also be kept in medium-sized aquariums (for example, 300 liters), however, for full growth and development, these fish simply need large volumes! Arapaima is truly a freshwater giant, reaching a length of three meters! Belongs to the Arapaima family. In nature, This fish lives in the Amazon. Arapaima is also the oldest fish on the planet. Their remains date back to the age of about 15-20 million years.

Arapaima has a very elongated body, covered with scales-armor. The head is flattened, with a largemouth. The color of the fish is silver with red scales.

Arapaima can be kept in captivity. The main requirement is that they need an aquarium with a volume of 1000 liters or more. They are a great option for show aquariums. You can be sure that arapaima will amaze any observer with its grace and power! Another freshwater giant is the Alligator Gar or Gar Alligator, which grows up to one and a half meters! The birthplace of fish is the reservoirs of North America.

The gar has an elongated, torpedo-shaped body with a mouth resembling a crocodile. The color of the fish is olive silver. Carapace pike – a predator – a loner feeding on any living creatures of a suitable size. Looks spectacular in show aquariums from 1000 liters. Pangasius or Paroon Shark is large, up to one and a half meters, spectacular freshwater fish native to Southeast Asia.

The elongated, swift body of black and silver color with high fins and a large mouth – all this makes the pangasius look like a shark!

In aquariums, as a rule, keep young of these fish. They are active and mobile, get along well in a pack. Adult individuals are more calm and restrained, look impressive in show aquariums from 1000 liters with other phlegmatic predators, such as arapaima. Phractocephalus or red-tailed catfish is a large, bottom-growing fish that grows over a meter, leading mainly a nocturnal lifestyle. The homeland of these catfish is the Amazon river basin. Phractocephalus is incredibly voracious; its largemouth can accommodate a fish similar in size to itself.

Phractocephalus has a flattened horizontal body, expanding to the head, with a sensitive mustache on its face. Attractive color: black and white body with orange-red tail and dorsal fins.

This Red-Tail Catfish is loved in home aquariums, but they are kept mainly by young individuals. For adult fish, a volume of 700 liters or more is recommended.

Tiger shovelnose catfish is a large predator from the Pimelodus catfish family, growing more than a meter in length. The homeland of this fish is reservoirs of South America.

Tiger shovelnose catfish is elegant and beautiful, but it should be kept in spacious show aquariums from 700-1000 liters. The fish has an elongated, powerful body with an elongated, flattened muzzle, a largemouth. Pseudoplatystoma coloring is gray-silver with dark spots and stripes.

Despite its voracity and aggressiveness, the Pseudoplatystoma is shy in the aquarium. For comfort, The aquarium should be decorated with grottoes and snags. 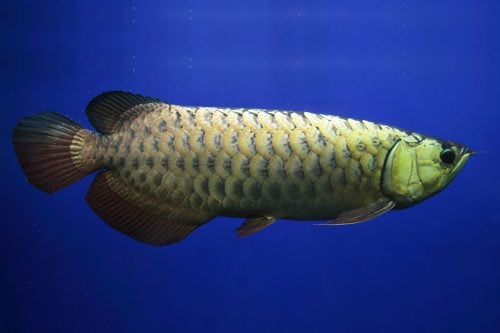 Arowana – a large fish from the Osteoglossidae family, growing over one meter. The birthplace of this is the Amazon basin.

Arowanas live under the surface of the water, hunting for fish, as well as animals and birds falling into the water. Arowana has a very elongated, laterally compressed body with a pointed head and a mouth that opens capaciously.

Big fish eyes are perfectly adapted for wide viewing. Arowanas have scales that are large, eye-catching, and highly decorative. The color of the fish is silver.

Aquarists love Arowana for its simplicity of keeping, interesting behavior, and unusual appearance. An aquarium of 700 liters is suitable for them, and a prerequisite for the maintenance of these fish is a tight-fitting lid! Arowana can jump out of the aquarium and easily try to “run away” from the aquarium. Fire eel has a serpentine appearance and prefers bottom layers of water. Fire eels belong to the Mastacembelidae family. In nature, they are found in reservoirs of Malaysia and Thailand.

Fire eel can grow up to one meter. They have a powerful elastic-like body, a very elongated body with a narrowed head. Coloring is very attractive: dark with horizontal red stripes.

Fire eel is unpretentious, however voracious, it is possible to keep it only with a proportionate moving fish. The aquarium for an adult is suitable for a minimum of 700-1000 liters. The aquarium must be tightly closed with a lid, in order to avoid the “escape” of Fire eel from it.

South American Lungfish is a large fish that can grow up to over a meter but at the same time peace-loving and calm fish from the family of Lepidosirenidae. In nature, it lives in reservoirs of South America.

South American Lungfish has a long, powerful, serpentine body with a rounded head, on which small eyes and mouth are located. Coloring gray with spots.

South American Lungfish prefers low, diffuse lighting in the aquarium. Perhaps they can be kept with proportional and non-aggressive tankmates in the aquarium of a minimum of 700 liters. Koi carp is a beautiful, powerful fish from the family of the same name. An active selection of these fish took place in Japan. As a result, a large number of color variations of carps appeared: silver, gold, tricolor, yellow, diamond, and others.

Carps grow about a meter. They are very unpretentious, which makes them the favorites of aquarists. A minimum of 1000 liters aquarium is required if you want to grow or keep a full-sized koi carp. 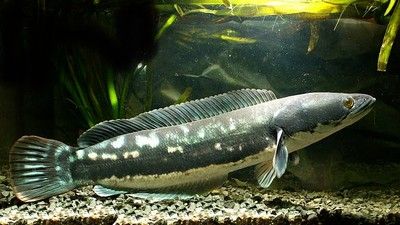 Giant Snakehead – a large fish that can grow up to one meter, fish from the same family. In nature lives in reservoirs of India and Vietnam.

The giant snakehead has an elongated, fusiform body, with a long narrow head and a largemouth. The color is gray with black and red stripes.

Red-headed Snakehead is an active predator. Juveniles can be kept in a small group, but an adult should be kept alone in an aquarium of 700 liters or more. The aquarium must be decorated with grottoes and snags for the comfort of the fish.

Another prerequisite for keeping snakeheads is a tight-fitting lid!