It is very small in size – no more than 5 cm. Under stress, the fish may look pale, but in the conditions of home maintenance, its beauty is maximally revealed. 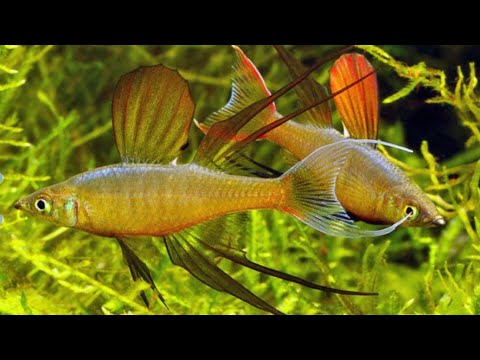 Sometimes fish can swim towards the mouth of the river up to 500 km. In Australia, they like swampy areas. Under natural conditions, they can often be seen in bodies of water with a small current, places overgrown with plants, as well as in marshy areas.

Young individuals form large flocks. They are near snags and fast-growing grass. Males join a group of females to find a mate. In the aquarium of this rainbowfish, the correct diet plays a key role.

The basis of fish nutrition is:

In appearance, it is a small fish whose body length is not more than 5 cm. It is difficult to describe any common features, since the appearance is largely determined by living conditions, in particular, the presence of good lighting and a nutrient medium. 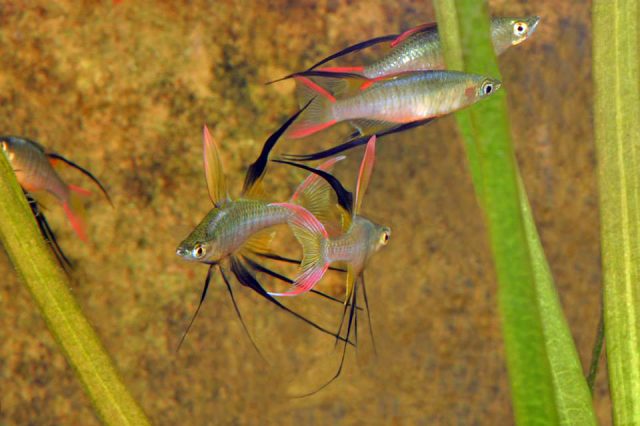 Life expectancy under good conditions in this species varies from 3 to 4 years. Even the position in the pack can have a direct impact on how long an individual lives.

Threadfin Rainbowfish generally find a common language with other fish. But some conditions are mandatory.

It is important to consider:

Threadfin Rainbowfish are omnivorous, but give preference to certain foods. They like to eat fruits, algae, plankton, insects that have fallen into the water.

When keeping in the house aquarium, they can be fed live food and crushed cereal. In the first case, frozen Daphnia and Artemia are suitable. 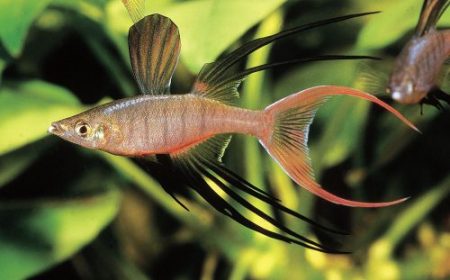 If you feed them with too large feeds, this will lead to the starvation of individuals. Food is offered in the form of small portions two to three times a day.

Be sure to ensure that the fish have time to eat if they are kept together with other inhabitants in the aquarium.

Threadfin Rainbowfish are small in size, which, however, does not prevent them from showing significant activity. They need a top closed aquarium of 60 liters. The cover is required to avoid jumping out. You will need a good filter, regular cleaning of the soil, and its replacement.

Changes in acidity and the accumulation of ammonia can lead to irreparable consequences. Threadfin should be kept in groups of 5 at least. It is better if there are 10 or more individuals. For each male, there should be two females.

Iriaterina needs aquariums where the environment should resemble its natural habitat as much as possible. They prefer an aquarium in which plants grow densely. The ground should be dark. Also, dim lighting is required. Miniature fish need enough space to swim. Most of them do not like a strong current. 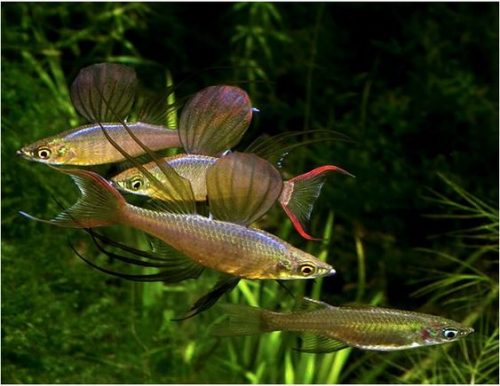 Water should supply them with a sufficient amount of oxygen. Aeration in this regard is the preferred option. The temperature of the water should be kept between + 23−28 ° C, pH – in the range of 5.5 / 7.5.

Threadfin Rainbowfish are quite peaceful creatures and do not harm anyone. However, they regularly suffer on their own. Due to their miniature size and cautious behavior, they are at risk of malnutrition.

Threadfin Rainbowfish feels good in the company of other rainbowfish, if they do not differ in impressive size or the aquarium is not too small for them.

Do not keep them together with fish that regularly break into neighbors. It will also be good to plant shrimp in the aquarium with them. Threadfin Rainbowfish regularly chase each other. Males have finely beautiful fins and regularly show their color.

If the flock contains representatives of both sexes, the males have a brighter color. To prevent fights among individuals, it is better to keep one male for the whole flock.

The appearance of the male is quite classic, so you can distinguish it simply. It has longer fins, which are distinguished by a bright color. Breeding Threadfin Rainbowfish is not difficult, but it is still difficult to grow fry.

Reproduction requires that the water in the aquarium is acidic and soft. Also, the water should have a temperature of +26 ° C or more. A couple of fish are placed and begin to feed intensely. To do this, use live food.

The aquarium spread Javanese moss and other small leaves. Spawning continues for several days. Moss will need to be removed as soon as caviar appears. The simplest organisms (for example, ciliates) serve as food for young animals. Also, fish need an egg yolk.

An aquarium looks unattractive if it has no plants. Bucephalanders relatively recently began to gain popularity. This plant naturally lives on the island of Borneo and prefers marshy areas.

He has rhizome and leaves. Bucephalandra is rarely used as a background object since it has good decorative qualities. You can highlight a huge number of varieties of this plant, differing in size and shape of growth.