Texas Cichlid (Herichthys Cyanoguttatus) also known as the Rio Grande Cichlid is an aggressive freshwater fish native to the USA found mostly in the rivers of Texas (commonly in the Rio Grande) and northern Mexico.

Despite being known for its violent temper it attracts a lot of admirers, mainly because of its bright colors.

Cichlid is generally found in North America and North East Mexico but nowadays it has spread to Florida and Louisiana. It is an aggressive and invasive fish and is known to kill off or drive away other species from its area of habitat.

Texas Cichlid is an oval-shaped fish, with flat sides and a concave forehead. The fish has a particularly big head and largemouth.

The male fish can grow up to 30 cm whilst the female slightly smaller averages at 20 cm. It is often found in ponds near heavy vegetation. 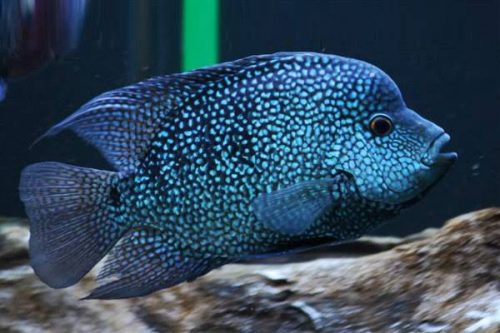 The average lifespan is about 10 years but some have been known to live up to 15 years. The Texas Cichlid is generally dark brown colored however the color varies with mating differences as they can mate with other species.

There have been known to have Green, Blue, and even a Red Texas Cichlid. However, despite this variation in breeding the Texas Cichlid is very easy to maintain because it is lax dietary and other requirements.

The Texas Cichlid can survive in both cold and warm waters because of its high adaptability. It can be found in both fast-flowing rivers as well still waters. It can bear temperature alterations and can survive in varying pH levels (7.5-9).

It is not a beginner’s fish and should be kept in a large aquarium by someone who understands the nature of the fish and can take care of its needs properly.

Males can grow up to 30 cm whereas females can only go up to 20 cm. Males have a taller body as well as a distinct nuchal hump.

The males are generally brighter in color as compared to the females and also grow larger. It has also been observed that the males are more pointed looking as well.

One of the ways through which a female can be recognized is through the black spots which are located on their dorsal fin but do not exist on their male counterparts.

Texas cichlids require large tanks and top-notch filtration systems because of the organic waste buildup that the fish leaves after feeding. They are also avid substrate diggers so there needs to be a thick layer at the bottom of the tank.

They require large tanks with at least 200 liters of water and if there are a few fish in the same tank then the water requirement increases to 400 liters.

The water needs to be constantly renewed. They need big tanks to grow their full size and a lack of such a tank will diminish their size and health.

Temperature restrictions are quite less for this fish. They need a temperature somewhere between 24-26 C0and a pH between 6.5-8.

The easiest job in taking care of the Texas cichlid is that being an omnivorous fish, it will eat almost anything. They particularly like artificial food with ideally high vegetable content.

The diet has to be substituted with other components such as fish flesh, prawns, and mussels. Mammal meat has to be avoided because it has a high-fat content. 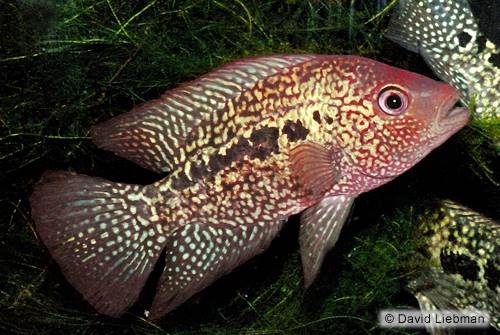 The Texas Cichlid only requires to be fed once a day and increasing its diet will not only contaminate the tank but will affect the health of the fish as well.

The fish food is readily available on Amazon.com and it’s genetically engineered for the fish as it does not contaminate the water tank. Following are the known brands:

Texas cichlid is not known to be a friendly fish and on the contrary, can be very aggressive during the mating season. So it is not advised to keep it with other fish species but rather let it have a large, roomy tank.

Texas cichlid is very territory conscious and often treats small fish as food. During the mating season, it is extra aggressive but that can be the case generally as well because of its nature.

It is good to keep with other cichlids of the same size but that can also change, and it is this unpredictability that doesn’t make it ideal for beginners to get a cichlid.

There have been cases of amicable cichlids as well. Common compatible companions include sailfin pleco and black ghost knife fish. 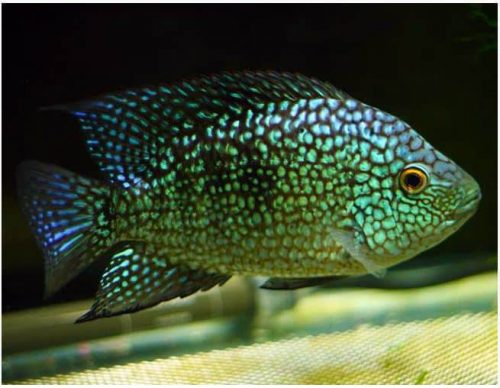 A cichlid does well with fishes that are capable of defending themselves. It is advisable to keep them with other cichlids, but every fish is different and sometimes a cichlid might be best left alone.

Compatibility with its habitat and other fish varies greatly.

When choosing the tank mates for the Texas cichlids, it must be kept in mind that these fish are quite aggressive and should only be kept with similar other large fish species which are capable enough of handling themselves.

When the fish is spawning they should not be kept near other fish as they are quite likely to kill the other fish in the tank. This applies to their species as the spawning pairs can get very aggressive.

The Texas cichlid fish are quite aggressive and large and can easily reach up to a foot in their length. However, a majority of those cichlids which are sold in the aquarium trade do reach a good adult size which is slightly smaller than that.

The body of the fish is pearl grey with green and blue-hued scales which gives the sort of appearance of pearl-like speckles, giving it another name of pearl cichlid.

The speckles also extend to its fins and there is a dark spot which is quite visible at the end of its tail and many other sports are there at the center of its body. The males, when they reach maturity, develop the traditional nuchal hump on their heads right over their eyes. When they are spawning, the fish assumes a striking half and half color as the front of their body portion of their body getting black or grey and black bar.

This is a challenging thing to achieve with the fish in a tank because of the nature of the fish and given that it becomes more aggressive at the time of breeding. The easier way is to get 3 couples and leave them be for mating.

The mating begins with a ‘flirting’ maneuver as they smack the partner’s body with the tail. If the courtship is successful, they will change the hind body color to black and the forepart to white.

The nest area is cleaned by the fish, usually a smooth stone or a small pit.

The female will lay eggs here and the male with fertilize them. Both males and females will fan the eggs with their abdominal fins to saturate the water near the eggs with oxygen.

The male, however, tends to get aggressive towards the female in this process so it is advisable to keep a barrier between them. The egg-laying process lasts 2 days and then the larvae hatch. They can be relocated from their parents during this time and they start swimming in a week or so. It is not a difficult task to grow these small ones provided they are given ample food. The diet can be diversified as the fish start to grow.

Although due to the protective nature of the cichlid it is better to keep in a separate aquarium for some time however a mix and match is necessary because the male might end up pushing all his aggression on the female.

So it is advisable to keep a barrier in the tank and keep removing it for short periods.

Another thing to keep in mind if you want successful breeding to happen is that during breeding, the oxygen levels in the tank have to be increased exponentially and organic waste has to be cleaned regularly.

Even after this, a few batches of fish may just be eaten by their parents. For Texas Cichlids will eat its children if it has to.

Texas Cichlid is difficult to breed but easy to maintain fish. Many are attracted to its bright colors which hide an aggressive nature. The habitat requirements are excessive but manageable. All in all, it is a fish for enthusiasts only – beginners might want to start with an easier fish.