Synodontis Catfish is one of the most unusual representatives of the species of catfish seen in the aquariums of Europeans from the water bodies of Central Africa.

Aquarists love these fish not only for their external beauty, unpretentiousness behavior, and calm disposition but also for the ability to save the owner of the aquarium from additional cleaning of the soil and walls. Catfish actively eat excess organic matter.

Synodontis Catfish belongs to the family of variegated catfish. Its natural habitat is the freshwater reservoirs of Cameroon and the Republic of Congo. Most catfishes are found in the African rivers Lekini and Malebo. They are also often found in wetlands on land.

The Latin name “Synodontis” this fish received due to the specific structure of the jaws. Their teeth merged into a single plate. The word “Synodontis” in translation means “merged teeth.”

Synodontis catfish were introduced into Europe in the 1950s. Aquarium fish lovers immediately fell in love with them for their small size and good coziness with other aquarium inhabitants.

The appearance of this catfish can vary significantly, but all of them have common features: 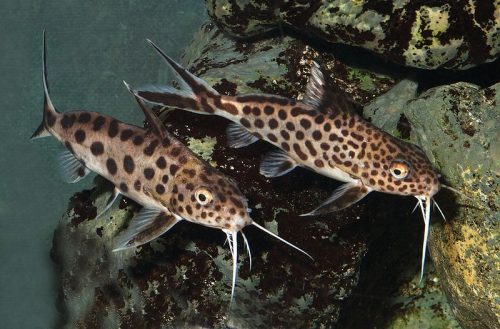 All catfish have a great appetite. Insects, snails, vegetation, and even small fish – all these are eaten by the Synodontis catfish.

Scientists know more than 150 species of these fish varieties. Moreover, not all of them are described. The most popular among aquarists are only a few.

Its Latin name is synodontis multipuctatus, which means synodontis polychaete. This catfish is very fond of the owners of aquariums breeding Tanganyika cichlids.

This fish is called Cuckoo because during the breeding season it quickly swims past spawning cichlids and throws its eggs into the masonry. The female cichlid takes them for her own and hides them in her mouth during the entire incubation period. 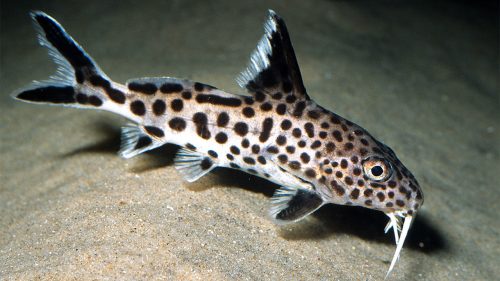 The skin of Synodontis Multipunctatus is light with a yellowish tint. Throughout the body area, there are dark spots of various configurations and sizes. In conditions of aquarium breeding, the fish can grow up to 12 cm in length.

Males are easily distinguished from females. They are slimmer and have a brighter color. It is not difficult to contain multi-spotted synodontis. You need to give them an aquarium with a volume of at least 80 liters. Inside it should be various shelters: artificial grottoes, caves, and snags.

So that catfish do not damage their delicate antennae in the aquarium soil, there should be no sharp elements. Therefore, when creating a substrate, it is better to use coarse river sand, fine pebbles, and gravel without pronounced angles.

To maintain the health of the pets, the aquarist will have to change at least a quarter of the total amount of water in the aquarium at least once a week.

Synodontis nigriventris also known as upside-down catfish is found in the Kogo River. It has a very bright appearance and funny behavior. It is difficult to observe the life of a fish since it becomes active only in the dark.

The skin of the fish is beige with a brown color, diluted with black spots. The dorsal fin is sharp, eyes are large and bulging. The abdomen is darker than the back and has a large bulge. 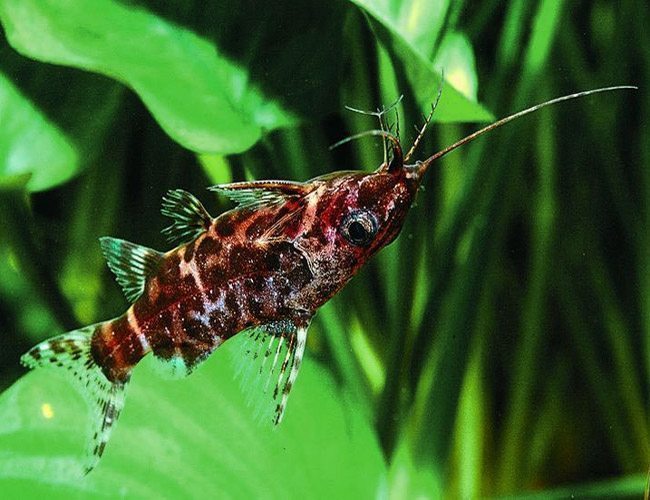 The fish got its name because most of the time spend the belly up. It turns over only during the period of collecting food from the bottom.

So far, scientists still have not been able to explain the reasons for this behavior of this catfish. In the first months of its life, the fish is no different from other fish, but then, for some unknown reason, flips up.

The average size of the fish is small: the female is 10 cm, and the male is 7. In captivity, the changeling lives no longer than 10 years. Due to its small size, an aquarium with a volume of 50 liters or more is enough to keep a pair of Synodontis nigriventris. The water parameters in it should be as follows:

At least a third of the total volume of water in the aquarium needs to be changed weekly. During the replacement, the fish will need to be transplanted into a temporary container. And here you should be careful. In case of danger, the shifter spreads its fins with sharp ends and can easily get tangled in the net.

This species has a large dorsal fin, similar to a veil, and an unusual skin color. She is bluish with a lot of black dots. The beauty of the synodontis catfish is best revealed in solitary confinement.

This fish is widely found in the water bodies of Chad, Sudan, Ghana, Cameroon, Nigeria. Synodontis Eupterus is omnivorous, but most of all it loves insect larvae. 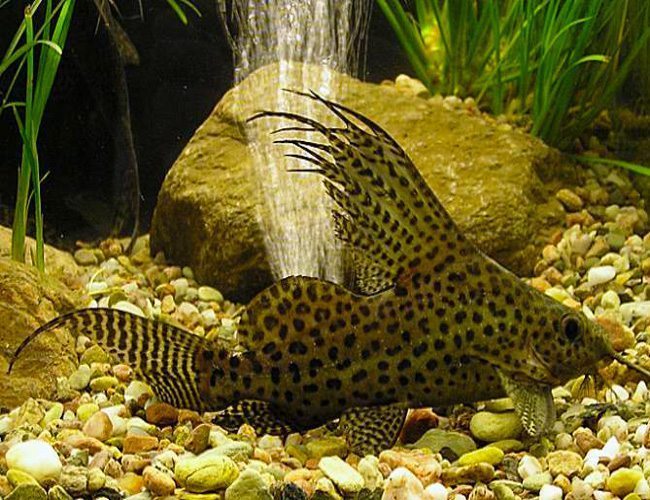 Synodontis Eupterus mainly live alone, but in natural conditions, they sometimes gather in small flocks. However, the composition of such conglomerates is constantly changing.

This is a fairly large fish. In the natural environment, it can grow up to 30 cm. In an aquarium, the length of its body rarely exceeds 20 cm. If an aquarist complies with all maintenance rules, then the average life of an aquarium catfish will be 10 years. There are cases when fish survived for 25 years.

Synodontis Eupterus has an elongated body, flattened from the sides so that in cross-section it has a shape close to a triangle. At the highest point of the body is the dorsal fin. By its size, you can distinguish a young individual from an adult.

Unlike other Synodontists, This catfish is completely unpretentious. He needs a spacious aquarium from 180 liters with snags and grottoes at the bottom.

The pet will choose one of the shelters and will zealously guard the entrance to it. If the owner has a desire to plant algae in the aquarium soil, it is better to choose species with a developed root system.

Synodontis Alberti cannot be called a favorite of aquarists. This fish is active late at night, so watching it is not a particular pleasure. If it is turned on, it is only to complement the existing aquarium community.

Synodontis Alberti is found in the Congo Basin. It inhabits its numerous tributaries and streams, but it rarely appears in the river itself. If there are areas in the reservoir that are densely overgrown with vegetation and with a large number of bottom snags, then the high- fin catfish synodontis will live there. Keeping the fish is easy. It is only necessary to provide the following conditions:

The big-eyed catfish has a calm disposition. He does not quarrel unnecessarily with other fish, so you can safely run him into the aquarium with other small pets. If necessary, he can be kept completely alone.

Synodontis Catfish are nigh wanderers and roam around the aquarium in the night only. The best tank mates for Synodontis are Gourami Fish, Large sized Barbs, Loaches, Tetras, Rainbowfish, Larger Danios, Pleco fish, and other catfish.

Synodontis Catfish can eat any kind of food. Their food preferences change significantly during the day. In the morning, they show all the habits of predators. At this time, it is better to feed them with live and dry food containing a large amount of protein.

Synodontis Catfish will not refuse pieces of shrimp and sprat meat but you should not feed them such a treat, Otherwise, they will become pure predators and begin to destroy other inhabitants of the aquarium. 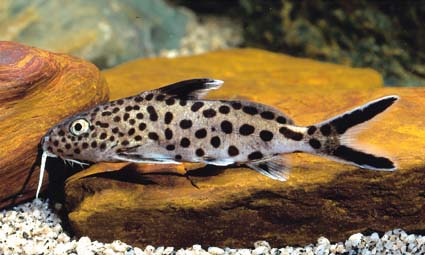 To blunt the instincts of a hunter in the synodontis, you need to regularly feed vegetarian food. The Afternoon is the best time for feeding this fish and try to give them Plant-based food, you can use crushed dandelion leaves, cucumbers, parts of zucchini, and spinach. Fish also enjoy oat flakes scalded with boiling water.

Synodontis Catfish are prone to obesity, you should not overfeed them in any case. From time to time it is recommended to arrange fasting days: do not feed the pets at all. They will not die of hunger, but this approach serves as a good prevention of diseases.

Synodontis Catfish is poorly responsible in aquarium breeding. It is especially hard to work with hybrid species. To stimulate the reproduction process, breeders have to inject hormonal drugs into their pets. The only exception is the Cuckoo Catfish. This species of catfish breeds due to nesting parasitism, tossing its eggs to cichlids.

The main problem of the aquarium breeding of synodontis lies in the impossibility of creating ideal conditions for this process. Many breeders take various tricks: they heat and cool the water, change the acid-base balance, and water hardness.

But it doesn’t help much. You can also try the trap for caviar. It is installed in an empty aquarium filled with water alone. The Shelter is installed at the bottom, an open container with a net is placed in it.

The female catfish climbs into the shelter and spawns. Caviar immediately enters the container. As soon as the spawning is over, the male and female are removed from the aquarium. The net is removed from the container so that the fry, which will appear later, can independently get out of it.

The synodontis are in fairly good health and do not often bother owners with their illnesses. Nevertheless, they have them. Most diseases are determined by external signs.

If the skin of the fish becomes dull, it means that the pet is faced with stress. Stressful conditions can be caused by overcrowding in the aquarium or environmental degradation. It is enough to eliminate the negative factors for the fish to recover. If the catfish lay on its side and began to breathe heavily, then this indicates a lack of oxygen in the water. The reason for this is most often the failure of the aerator. After repairing the appliance, the pet will recover quickly.

Moreover, it is desirable to restore the operation of the device as early as possible. The fact is that a long lying catfish at the bottom very often leads to infection of the fins. Fin rot develops. Infection is treated with a bath with Streptocide.

Synodontis are sensitive to changes in any water parameters. It is enough to monitor its quality so that the fish do not appear diseases.