Swordtail Fish – People often start keeping aquarium at home or their office for peace of mind and to adore these beautiful fishes.

Swordtails are active and beautiful underwater inhabitants distinguished by species, diversity, and ease of care. These peaceful fishes are perfect for your home or office aquariums. Swordtail fish lives in Central and North America. Most often found in Mexico, Guatemala, and Honduras.

They live in fast rivers, calm ponds, fresh and brackish waters. Swordtails are found in abundant thickets, where they are found to feed on different kinds of insects and algae.

The color of Swordtails living in nature is much paler than that of artificially bred forms. Swordtail fish (lat. – Xiphophorus) refers to a live-bearing species and belongs to the Pecilian family.

The fishes are characterized by their tail which appears like a sword and due to this special feature, these fishes are called Swordtails.

The tail of this fish can be round or in the form of a beam. The elongated body is flat on the sides and their mouth is shaped slightly upturned.

This makes it easier for fish to swallow food from the water surface. Coloring can be any. In some species, the fins and body are different in color.

Females are usually larger than males and are characterized by rounded fins. Males have a brighter color and an elongated tail. 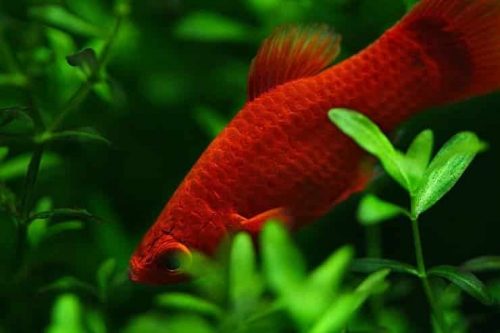 Under natural conditions, Swordtails can reach a length of 12 cm but when kept in an aquarium they grow only up to 7-8 cm, but under the most favorable terms, they can be more substantial. On average, swordtail fish live 4-5 years.

These fish have another feature. If the flock is significantly dominated by females, then they can change their gender to male.

The xiphoid caudal fin and gonopodia appear in them. Changed individuals behave like males and look after females, but they do not bring offspring.

The natural color of their tail is green in color with a gray tint. As a result of crossing them with Poecilia, many other varieties were developed, which can be bright or dark shades and they also differ in body shape and fins.

Green Swordtails: It is characterized by olive-brown color. On the body, there are one or more light stripes along the body. The sword is distinguished by a color edging.

Albino Swordtail: The albinistic form of the green swordtail fish has an unusual yellow color with a greenish glow. This subspecies is challenging to breed since offspring rarely retain the characteristics of their parents.

Black Swordtails: A hybrid of a green swordtail fish and black Poecilia. Fish is black with a blue or green tint. Excess pigment adversely affects the reproduction of individuals that are often sick.

Tricolor Swordtail: This species is characterized by a white body, on which large black and red spots are located.

Rainbow Swordtail: This variety is rarely sold in pet stores. The fish can be of different colors, but most often, there are specimens with a gray, orange, and green hue on the sides of which there are red stripes.

Yellow Swordtail: The creamy-yellow fish are distinguished by specks and pale zigzag stripes on the sides.

In one tank, you can keep several different types of swordtail fish. Their offspring are obtained with a variety of colors and patterns. But to fix the signs of new instances is difficult; therefore, only professionals are engaged in their selection.

Keeping Swordtail in the Aquarium

The unpretentiousness of the swordfish fish for maintenance and care makes it one of the best aquarium pets but for the healthy growth and development of these fishes, it is recommended to create all the necessary conditions for them.

Select a rectangular aquarium if you are planning to keep swordtails. For 4−5 swordtail fish, you will need a capacity of at least 30 liters. In such conditions, they will be able to move freely and not interfere with each other. It is best to place the tank in a well-lit place, but away from direct sunlight and batteries. Since the fish often jump out of the water, the aquarium must be closed with a lid.

The optimal temperature for swordtail fish will be + 23−26 degrees. Fish can withstand lower rates (up to +17 degrees). Water should be with an acidity of 7–8 pH and a hardness of 8–25 DH. As the soil, small seashells, pebbles, or decorative pebbles are suitable.

For a large aquarium with a large amount of fish, you will need a particular device to enrich the water with oxygen. If the container contains no more than five pets, then you can do without a filter.

Algae must be planted in your aquarium, which will not only decorate it but will also produce oxygen, which is necessary for this fish.

Besides, these algae will come in handy as a portion of additional food for the swordtail fish. Thickets of plants will be an excellent shelter for fry hiding from adults, but you need to make them thick.

Swordtail fish need a balanced diet. Since they are unpretentious in food, their diet can be varied. They eat any food: vegetable, lively, and dry. With proper feeding, the fish develop well and live long.

For swordtail fish, the following food is suitable :

The products should be pre-chopped, and the mixture should be scalded in boiling water. You should not feed this fish more than twice a day. In the morning they can be given dry food and in the evening you can give some vegetables.

For dry feed, it is recommended to purchase Tetra brand dry feeds as the company produces products for each type of fish separately.

The assortment also includes feed for fry and enhancing the brightness of the color of underwater inhabitants. 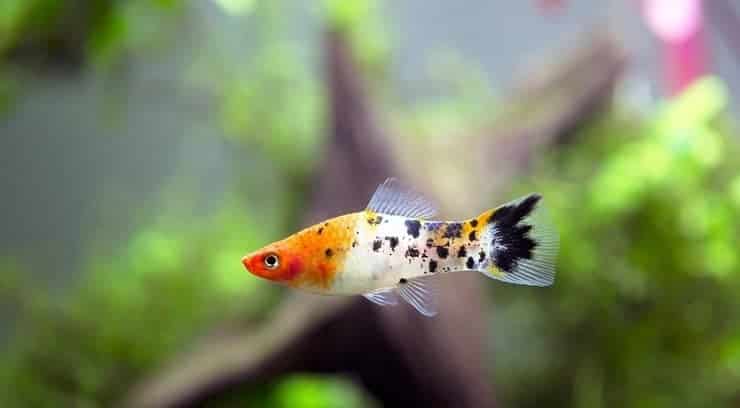 If there is a need for a vacation, the owner may well leave the swordtail fish without food for 1-2 weeks. Although they can last even longer, it is advised to place more algae in the aquarium for them.

During the absence of the host, the fish can eat fouling formed on the leaves of the bushes and the walls of the tank. If there are small snails in the aquarium, the swordtail fish can shake them out of the shells and eat them.

Keeping swordtail fish in the aquarium does not cause problems if they live with their relatives. But sometimes clashes arise between males.

This usually happens if two males live in the tank and fight for the territory. Specialists advise purchasing at least three males to avoid such situations.

Tankmates for swordtail fish should be selected carefully because they can not get along with everyone.

You can add to them:

Peaceful swordtail fish rarely show aggression to other species of aquatic life, but they can pluck the fins and tails of veil fish.

Sometimes old males attack others, but such individuals are sporadic. Swordfish can be aggressive in cramped aquariums.

Since the swordtail fish act as viviparous fish, their fry does not appear in the form of eggs, but already fully formed. For breeding, take one male and three to four females.

If there are more than five swordtail fish in the aquarium, then there should be at least three males. Females choose the most productive males with large body sizes and fins.

There is no need to stimulate the swordtail fish to reproduce, as males are always active. But conditions can be slightly improved: the temperature of the water should be set to + 26–27 degrees.

The level of nitrates and ammonia should below, and the acidity should be between 6.8 and 7.8 pH.

The male fertilizes the eggs inside the body of the female, which she carries for 30-40 days. It is necessary to monitor the future mom, who eventually grows fat.

A dark spot soon forms near her anus, which is the eyes of fry that are visible through her body.

This means that it is time for the female to be transferred to another container. If future offspring remain in the conventional aquarium, other adult swordtail fish can eat them.

To save the fry, you should buy a new aquarium or a small vessel of 15−20 l, where you need to add algae, among which the future offspring will hide. Also, in such thickets, it is easier for females to give birth.

The number of Fry in one litter depends on the age of the female, its size, and environmental conditions.

At one time, the female can bring from 15 to 150 fry. After childbirth, she is kept back to the general aquarium. The fry of the swordtail fish is distinguished by their activity and a constant feeling of hunger. As a food, they are given egg yolks, grated cereal, and artemia nauplii.

They can also be given spirulina and fiber flakes. Young individuals should be added to the standard tank when they are sufficiently robust and grow to enormous sizes.

Since they develop in different ways, they are planted in small groups in the aquarium.

Sometimes females give birth to fry without the participation of males. They store the male’s milk inside their body for several months and fertilize themselves. This can happen more than once in fish.

Breeding swordtail fish in artificial conditions is quite simple. If you do not plan to populate the aquarium with a large amount of fish, then active males always chasing females should often be sent to another tank.

Swordtail fish rarely get sick. Usually, they have problems due to poor living conditions or poor-quality food, from which they catch a cold or infection.

Fungal diseases can easily be eliminated after quarantine in salted liquid. With such water, it will be possible to clean the outer cover of fish and kill harmful bacteria and parasites. 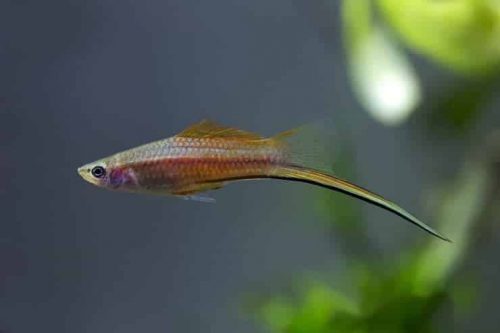 After acquiring aquatic pets, they should be carefully examined. On their body, there should not be signs of plaque, guns, rashes, and ulcers, which indicate the presence of diseases.

Cure gills and scales will turn out with solutions of riboflavin and bleomycin.

If the swordtail fish is sick, then he should be placed in a salt bath for 10-15 minutes. For 1 liter of water, one tablespoon of salt will be required.

Then the fish can be placed in a weak solution of methylene blue, while the temperature of the liquid is set within +26 degrees.

A sharp change in the acidity of the aquatic environment causes stress in aquarium fish. This should be avoided by maintaining a stable pH.