In appearance, the fish is very similar to a real shark, it has a high fin on the back, the general shape of a shark’s body, but in terms of behavior, it is harmless.

Silver Shark fish belongs to the order of cyprinids. It was first described in 1851 by the Dutch scientist Peter Blecker.

The natural environment of its habitat is the aquarium:

Silver Sharks prefers clean streams and rivers and can tolerate any depth.

Studies indicate that the number of “Silver Shark” in the natural environment is declining. The reason for this is global environmental pollution and prohibited catch of these sharks for subsequent sale for decorative purposes.

Silver Shark is a common fish, but due to the critical decline in their population, they are listed in the Red Book.

The scientific name of the freshwater inhabitant is the Balantiocheilos melanopterus.

These Silver Sharks can grow up to 25 cm in length when proper home conditions are created. They are usually referred to centenarians because they are not bound with the average fish age of 10 years.

The silver sharks are representatives of the cyprinids family. Compared to the overall size of the body, the eyes and mouth are disproportionately large. They have a large scale of silver-gray shades. When bright rays of light fall on it, a mirror effect is created. 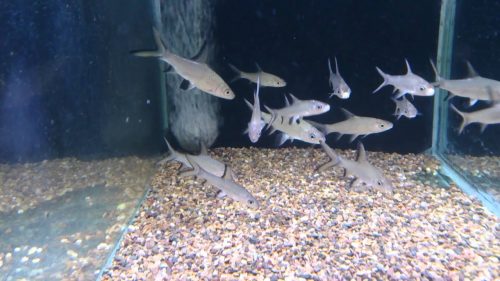 As for the pectoral fins, they are almost invisible because of their transparency. Light gray or yellowish tones distinguish the remaining fin parts of the body. Their edging is made in contrasting black.

The peculiarity of the dorsal fins, located almost perpendicular to the body, led to similarity with real sharks. However, they are the complete opposite of aggressive marine predator sharks.

In pet stores, most often aquarists are offered Bala sharks that are caught from natural habitat. Artificial breeding of such animals is practically minimized. Wild individuals, not accustomed to aquarium conditions, are initially nervous, inadequate.

The adaptation period, on average, lasts 1 month, after which representatives of cyprinids gradually develop in a new house. At the slightest noise, knock, or sudden movement, these fishes rush to their closed space.

They might also hit hard on the glass while trying to hide, and can be seriously injured.

The fish are shy, they are more confident in the pack, which is why experts recommend keeping several individuals at the same time. In such a situation, a characteristic hierarchy is built.

These silver sharks are quite peaceful, except for the spawning period. Silver Sharks compatibility is usually convenient and practical, but their big size should be considered. These fishes do not get along well with small individuals.

You can keep silver sharks with:

Experts do not recommend keeping Bala Sharks in the general aquarium with aggressive cichlids.

You should not keep these sharks with any kind of veil tailed fish even for a short period. The former are very curious and will certainly bite the long tails and fins of other inhabitants. 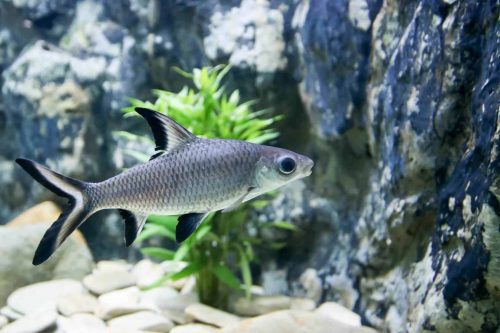 These fish are not predators, but they are happy to swallow anything that can fit in their mouths. Their combination with small zebrafish, neon tetra, and other viviparous representatives are not recommended and your shark might end up eating them.

This is a strong and extremely unpretentious fish, but if you do not follow specific rules, it may feel uncomfortable in the aquarium.

A prerequisite is the presence of a spacious container of at least 200L and the length of which should be at least 1M.

In cramped conditions, the normal development and growth of the silver shark are almost no and the disease progresses, and death occurs as a result.

Do not use aquarium screens. For playful fish requiring space, they are inappropriate. Herbalists with dense thickets will become superfluous, which will interfere with the speedy movement of sharks.

They do not need special grottoes, shelters, and decorative driftwood and boulders are best placed along the perimeter of the bottom.

The delicate and soft vegetation of the Bala shark can be easily destroyed. The best option is to plant hard-leaved algae, for example, echinodorus, anubias, etc. 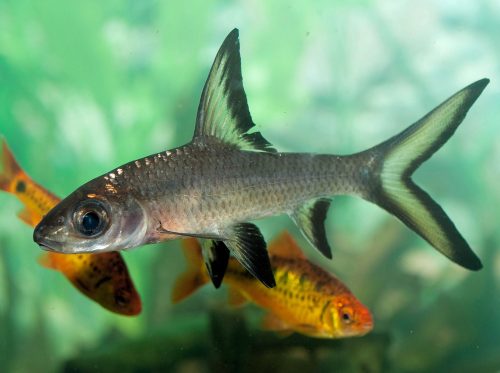 A good option is to use only artificial decorations in which the phyto filter is masked to purify water from phosphorus and nitrogen impurities, as well as to provide an adequate supply of oxygen.

To recreate a strong and powerful current, as close as possible to the Bala shark’s natural habitat, you will need powerful models of filtration plants.

Fish are not whimsical to the composition of the water, but it must always remain clean. The optimal acid level for aquatic representatives of cyprinids is from 6.0 to 8.0 pH. Hardness levels can vary from 5.0 to 12.0 dGH. Water is replaced by half or a third of the volume weekly.

Comfortable temperature conditions are maintained in the range from 22 to 28 degrees. At home, it is set using special conditioning and heaters.

Silver Sharks in nature eat a variety of things in their natural habitat. The normal growth of the shark is ensured by an enriched diet consisting of dry and live food.

They are happy to eat chopped daphnia, artemia, mussels, and shrimp. One needs to be careful with a bloodworm since this is not well digested by these sharks.

To ensure the full development, regular consumption of plant foods is required. You can feed them with fruits, green peas, spinach, nettle leaves, and lettuce.

Feeding should be carried out 2 times throughout the day in portions, which ensures complete eating of the proposed feed in a short time.

Such aquarium inhabitants are voracious, prone to overeating, which also needs to be taken into account.

Rainbow Shark (Epalzeorhynchos frenatum) also known as Red Fin Shark and Ruby Shark is one of the most beautiful fish...