They have a beautiful appearance and are of great benefit like eating algae fouling in the aquarium, etc. Sailfin Pleco or leopard pleco will be discussed deeply in our today’s article. 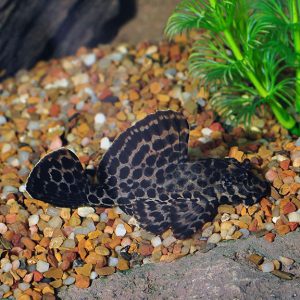 Despite its impressive size, Sailfin Pleco is a peace-loving fish and their gastronomic interest is almost completely limited to vegetation. These fish are good helpers in the fight against algae growths on the walls of the aquarium.

The Sailfin Plecos are mostly nocturnal. When kept with closely related species, skirmishes are possible, during which an interesting form of behavior is observed.

Leopard plecos raise the dorsal and spread the pectoral fins in all directions. In nature, fish thus deceive predators by visually increasing their size.

Under natural conditions, during dry periods, Sailfin Pleco buries themselves in the ground and hibernate before the onset of the rainy season.

These catfish are characterized by intestinal respiration: with a lack of oxygen, the fish is able to swallow air above the surface of the water and absorb it using the circulatory system of the intestine.

Being pulled out of the water, Pterygoplichthys can make hissing sounds. It is believed that this is also an adaptation in order to scare predators.

Sailfin pleco has an elongated body, slightly flattened on top. The entire body, with the exception of the abdomen, is covered with dense bone plates.

The head is large, with characteristic protruding nostrils. The mouth is modified into a large suction cup, with the help of which the fish can be held on vertical surfaces. At the base of the oral suction cups are thick antennae.

The eyes are small, located on the top of the head. They are arranged in such a way that the fish sees not only what is happening in front of it, but also able to observe the situation from behind or from the side. Only the space above the catfish remains in the dead zone.

The dorsal fin is large, sail-like, has at least twelve rays. The pectorals resemble wings and are very close to the ventral. They are very powerful and help the fish dig into the ground. The main body color is chocolate or almost black, with a large number of beige lines that create a pattern resembling a leopard skin. With age, it can fade and disappear completely. There are albino forms as well for this fish.

The pectoral fins are also large, composed of thick bones, which helps the catfish dig into the ground.

Under suitable conditions, brocade catfish can grow up to 50 cm.

The birthplace of Pterygoplichthys is South America. They can be found in the river systems of the Amazon, Orinoco, the Brazilian rivers of Shingu, and Tefe.

Fish prefer slow-flowing rivers, settle mainly on the shallows in those places where there is a lot of silt. Often gather in large groups.

During the wet season, they are very active and voracious and feed on vegetation and algae.

In dry times, they dig into wet sludge and hibernate to survive adverse conditions. Currently, they are actively bred in Asian countries, from where they are supplied worldwide.

Sailfin Pleco is a very large fish, the minimum volume for keeping one individual is at least 250 liters. Coarse sand or small pebbles are suitable as soil.

It is recommended to install a variety of shelters in the aquarium: caves made of stones, ceramic or plastic pipes. There must be a natural snag.

The aquarium should be equipped with a powerful external filter and compressor, fish love clean oxygenated water. It is worth paying attention that intestinal breathing cannot replace aeration. If the sailfin often pops up for a portion of air, then there is a problem with the oxygen content in the aquarium. Sailfin plecos also require weekly (up to 30%) water changes.

When choosing plants, one should take into account the fact that leopard pleco can easily dig up any aquarium plant, so it is better to dwell on species that are well-rooted like cryptocorynes, wallisneria, etc.

If the plecos do no get enough feed or algae to eat then they might start eating the natural vegetation of the aquarium.

The sailfin plecos are peace-loving fish, but it will be wrong to keep small species to them, they can become an accidental victim of a giant.

Even the flowerhorn fish that destroys all the flowers will not be able to do anything of these armored Pterygoplichthys gibbiceps.

Sailfin catfish are quite zealous in their territory and can drive away unwanted guests. Conflicts may arise, with their relatives or say closely related species like Ancistrus and Gyrinocheilus.

The life expectancy of Sailfin Pleco in the aquarium is up to 20 years.

For the full growth and development of Pterygoplichthys, their diet should consist of plants (80%) and live feed (20%). Some aquarists prefer to feed these catfish with natural vegetables and herbs: zucchini, spinach, carrots, cucumbers.

The disadvantages of such feeding is a high probability of deterioration in water quality in case of incomplete eating of fish food. Pterygoplichthys will not refuse from the natural animal feed like bloodworm, tubule, but it is not recommended to feed the fish with live food, i.e. It can introduce the infection into the aquarium. Dry feeds are an ideal choice for sailfin catfish. To diversify the diet, we recommend giving the Tetra Pleco Veggie Wafers catfish – tablets with the addition of zucchini to improve well-being and maintain the vitality of fish.

It is very important that there is driftwood in the aquarium with pterygoplichts as sailfin plecos get the necessary cellulose for proper digestion from driftwoods.

It is best to feed the fish after turning off the light and make sure that active tank mates do not encroach on their food.

Thanks to their special love for algae, Pterygoplichthys will become good helpers in maintaining the cleanliness of the aquarium.

Sexual maturity in Pterygoplichthys occurs at the age of about three years. At this time, fish usually reach a size of 15-20 cm. Sexual dimorphism is not pronounced. The most accurate way to determine gender is by the shape of the genital papilla.

Breeding sailfin pleco catfish in a home aquarium is not possible. Indeed, in nature, fish dig deep tunnels in the silt, where they lay eggs. After which the males guard the fry. It is difficult to reproduce such conditions. At fish farms, Pterygoplichthys is bred in special ponds of large volume.

Spawning occurs at night. One female can lay 120-500 eggs. The fry is distinguished by a gray-gray color with black dots and, after resorption of the yolk sac, they are fed tablets for catfish.