Rainbow Shark (Epalzeorhynchos frenatum) also known as Red Fin Shark and Ruby Shark is one of the most beautiful fish to keep in your aquarium and watching them is pure eye candy.

However, recently a small natural population has been discovered and the species has been classified as endangered. 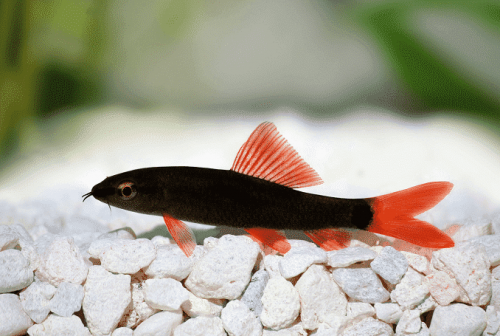 In Thailand, these fish are grown for sale on special farms. Thanks to its extraordinary appeal, the rainbow shark will become a worthy decoration of any aquarium.

According to unconfirmed reports, it lives in rivers and streams, and during the rainy season, it migrates to flooded fields and forests.

The species was on the verge of extinction. But, despite this, Rainbow Shark is distributed in captivity, and massively bred around the world.

Rainbow Shark owes its popularity with aquarists to its appearance. The body of the fish is black, velvety, and the tail is bright red.

The shape of the body resembles a shark, which is why it is also known as a Red-tailed shark.

There is also an albino shark fish: its body is white, and its eyes and fins are bright red. Such an aquatic inhabitant differs from ordinary rainbow shark only in color, in everything else they are completely identical. 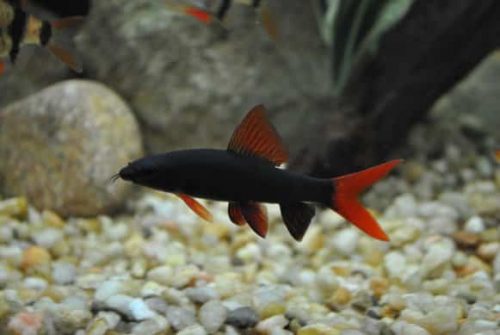 These Rainbow Shark can get quite large, its length is on average 15 cm and some individuals can reach 20 cm. These fishes live on average 5 years, although some aquarists report individuals who have lived 9-10 years.

This combination, plus the great activity of the fish make it very noticeable even in large aquariums.

Male and female Rainbow Sharks have some differences in appearance:

In young individuals, these differences can be very difficult to identify.

If we talk about Rainbow Shark fish, its maintenance will require a spacious aquarium. The volume must be at least 200 liters.

The more free space a fish has, the less it will show aggression towards other individuals. The requirements for keeping these sharks in the aquarium are as follows:

Under natural conditions, the fish prefers plant food but can eat insects and larvae. Granular fodder with a large amount of plant fiber can be given to these sharks. You can use tablet food as well.

Additionally, you can give slices of zucchini, cucumbers, lettuce, and other vegetables.

As an additional top dressing, you can give the fish some pieces of vegetables.

Rainbow sharks eat algae as well. You can also give in small quantities animal feed of any kind.

This is where the problems we talked about at the beginning of the article begin. Despite the fact that the species is widespread and often sold as a fish suitable for a general aquarium – this is not so …

This does not mean that it needs to be kept alone, but the fact that tankmates need to be selected with care. 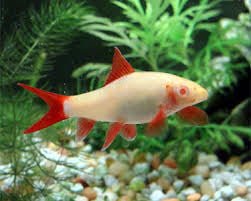 While these sharks are small, They will avoid conflicts, but when sexually matured, They become aggressive and territorial, especially to fish of a similar color or breed.

Rainbow Sharks prefer to stay alone. Pairs of fish form only before spawning.

By nature, these water inhabitants are very active and zealously guard their territory. Within the boundaries that they consider their own, they can attack both relatives and representatives of other species.

In the aquarium, they prefer to stay close to the bottom. Keeping two rainbow sharks in the same aquarium is not recommended, as they will start to fight each other.

It is also not worth settling any kind of catfish, which also feeds near the bottom.

You can keep Rainbow Sharks in the aquarium with fish of about the same size. Good compatibility can be with the following types:

All these species prefer to live in the upper layers of water. They are pretty nimble to dodge aggressive neighbors.

Puberty occurs in Rainbow Sharks after 1 year. The reproduction of these fish at home causes a lot of difficulties.

Their natural spawning is a very rare occurrence, therefore, the introduction of hormonal drugs is required for reproduction.

There are several patterns of hormonal stimulation:

The medicine should be administered into the muscles with the upper part of the syringe. This is most conveniently done with an insulin syringe.

After spawning is completed, an antibiotic solution is added to the water where the producers are kept.

It will not be possible to find special preparations in the market; they are available only on special fish farms.

Instead of hormonal injections, you can use non-hormonal drugs like Nerestin. It is administered intramuscularly or added to the feed. It is necessary to give medicine twice with an interval of 24 hours.

In this case, spawning may occur later, however, such stimulation is less traumatic for fish. The antibiotic, in this case, can be omitted.

Another difficulty is the small number of males in litters of Shark fish. Since females are usually larger than males, they often win the battle for territory.