One of the exciting characteristics of Rainbow cichlids is that they have tricuspid teeth that are specialized to feed on filamentous algae, which makes a large amount of their diet.

They have a unique capability of altering their color according to their mood. 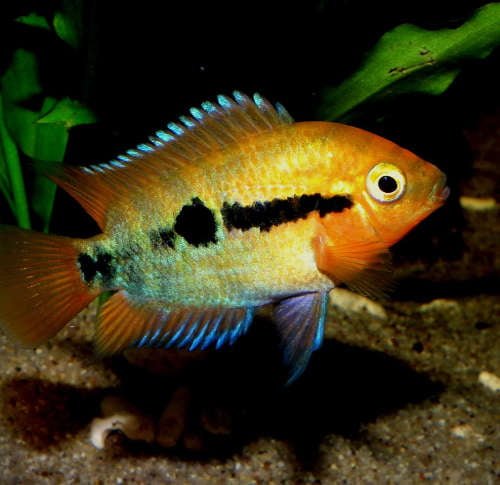 The background color of this fish is golden to lemon-yellow and has a horizontal black bar that runs from just behind its eyes towards the base of its caudal fin.

They are found on the Pacific slope from the Guasaula River in Nicaragua to the Bebedro River in Costa Rica.

These species are, however, not listed in the IUCN red list. It is generally hard to tell the male and female rainbow cichlids apart. Usually, the males are more colorful and have pointed fins, and the females are generally smaller even after they mature.

However, in the wild, they have longer lengths. The males are generally longer than the females. With proper care, they have a lifespan of about 7 to 9 years. They have one nostril on each side, while other types of fish have a set of two.

To get a “smell” of something, they have to suck the water in and exhale the water back after “sampling”. 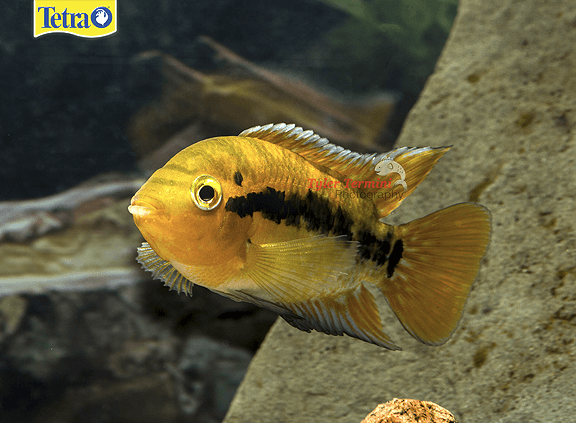 This feature is shared by other saltwater damselfish, and it is thought that the cichlids are closely related to them. These fish are easily available online as well as at fish stores. They are not expensive but are moderately priced.

The rainbow cichlids are native to both the Pacific and the Atlantic slopes of Central America which range from Honduras to Costa Rica to Nicaragua.

They are generally found in the shallow to turbid waters such as the weedy margins of streams and lakes.

They can also be found in small ponds that may be flooded periodically by nearby rivers. There has been an introduced population established in the hot springs at Hévíz, Hungary.

The rainbow cichlids are generally peaceful and are well-suited to be placed in a community tank. They can easily be kept in a tropical water tank with other catfish, tetras, rainbows, and certain livebearers. 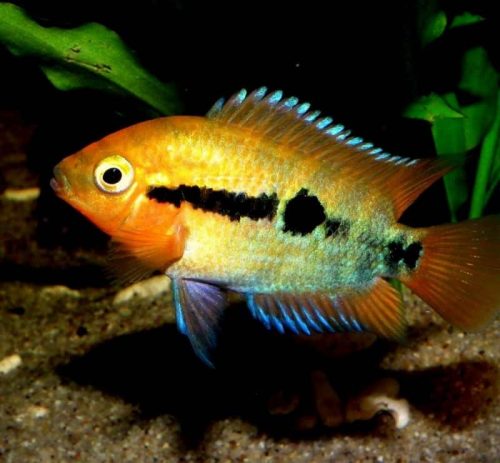 They can even be held alone or as a pair. Since this species is not aggressive, it can also be housed with another pair of rainbow cichlids, if the tank size is large enough.

It has to be kept in mind, however, that like other cichlids, they may also become territorial and aggressive especially during the time of spawning. As such, they should be monitored during that time.

The usual habitat of these species is the swampy areas with muddy substrates or the weedy margins of lakes where they feed on detritus and algae filaments.

During dry weather conditions, they can tolerate high temperatures and have been recorded to have survived even 36 degrees C.

This is, however, an extreme example, and it is recommended to maintain these fish at a steady temperature between 22-28 degrees C in the aquarium tank.

The tank size should be at least 3 feet in length for a pair of Rainbow Cichlids, and a larger one if a group is being maintained.

It is better to choose sand, as opposed to gravel for the bottom of the tank since they prefer a muddy substrate.

The shelter should be provided in the form of smooth rocky pipes or rocks, driftwood, and flower pots. For an additional cover, there can also be areas with robust planting.

There should be proper filtration with a moderate level of water flow, but there should also be some calmer areas created in the tank.

These Rainbow Cichlids require clean water, so it is essential to conduct regular changes in the water so that the level of nitrate is kept to the minimum.

These species are relatively peaceful (especially when compared to other cichlids!), and they can easily be placed along with other peaceful fish. They are quite easy to care for due to their calm nature.

The Rainbow Cichlids are omnivores. When they are in the wild, they usually feed on flocculent detritus and have a liking for diatoms, pure algae, and filamentous algae. They also prey on smaller insects and other small fish. When they are in captivity, they can easily feed on pellets or flakes. They are generally eager eaters and also savor prepared foods like tubifex, ocean plankton, freeze-dried bloodworms and even floating food sticks.

They can consume vegetable-based flake also. They need to be fed twice a day with small amounts of food. Vitamins and supplements can also be added to their diet, as all fish benefit from them.

Rainbow cichlids, like other fish, are also susceptible to fish ailments, especially if the water is of poor quality or stale. One of the most common problems associated with them is ICH.

This problem can be treated by elevating the temperature of the tank to 86° F (30° C) for at least three days.

If this does not help solve the problem, they have to be treated with copper. This means you must remove any water conditioners. There are many medications as well that address ICH. 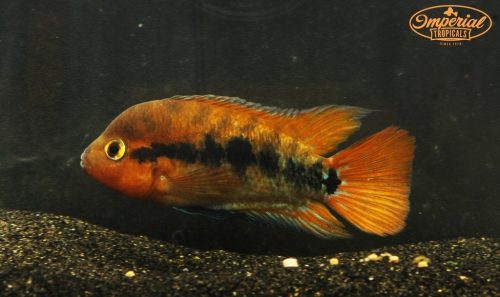 Copper should, however, be kept at the proper levels in the water tank. The temperature of the water tank can also be increased along with an ICH medication treatment. If the fish have an intestinal disease, it can be treated with metronidazole.

Rainbow Cichlids breed openly and even form nuclear families where the older siblings care for their younger ones.

Younger juveniles can be bought together and left to pair off naturally. Once a pair is formed, you can condition them to eat frozen food like bloodworms and brine shrimps.

For spawning, flat stone or a flowerpot should be provided to them. The pH of the tank should be at least 7.0, and the hardness of the water should be about 5 – 10° dH.

The temperature should be kept at 82° F (28° C) for breeding, and there should also be frequent water changes.

When the pair of Rainbow cichlids is ready to spawn, their color will turn dark. The female cichlid will lay around 300-1,000 eggs outside in the open on a root or rock. The parents will fan the eggs for three days until the fry is hatched from the egg. The fry is then moved to another area in the water tank.

The fry can feed on cyclopentene or freshly hatched baby brine shrimp. After about a week, the fry can be fed crushed flake food.

It is also advisable to remove any other fish from the tank that may also end up eating the fry. After about a few days, the fry, also known as “wrigglers”, can swim freely. They venture away from their place, but they remain together, protected by both of the parents.

The Rainbow cichlids can emit sounds underwater, probably through their swim bladders. Various noises like “thumps” or “volleys” have been recorded during agonistic interactions. 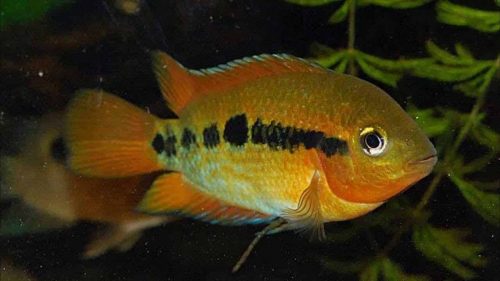 Growls have also been heard before the process of spawning, which helps to synchronize the breeding pair, and this has been reported in other cichlids as well.

Moreover, a “whoof” sound is also heard which is an appeasement signal that is shared between a breeding pair to minimize aggressive interactions.

These fish are personable and have been part of the aquarium for a long time. It is due to their rainbow coloring, their peaceful nature, and their manageable and compact size.

As mentioned earlier, their colors can also change depending on their mood, especially during the time of spawning. They generally have a golden to orange body and exhibit beautiful blue hues on their fins and lower body, along with their fin tips.