Puffer Fish – Many biologists think that the puffer fish, which is also known as Blowfish, have developed their inflatability due to their clumsy and slow style of swimming which makes them quite vulnerable to predators.

For escaping such circumstances, the fishes make use of their elastic stomachs. Alongside their ability to quickly ingest a large amount of water and air when necessary they successfully turn themselves into an inedible ball that is several times their original size.

Some species of the Puffer fish even have spines on their skin, which makes them less palatable.

Due to their ability to inflate themselves, they get the common name of ‘puffer fish’. They are great to have as aquarium pets with their expressive faces and their propeller-like fins which makes them extremely charming.

Puffer fish have touch and prickly skin along with fused teeth which form a beak-like structure that has a split in the center of the jaw.

This gives it the ability to crush hard materials like the shells of crustaceans.

Their teeth grow throughout their lives, and to keep the growth under control, they need hard-shelled foods that can keep their teeth in an appropriate length.

They have long and tapered bodies along with a bulbous head, and some of them have wild colors and markings which show their toxicity while some others have a cryptic or muted colorings which make them blend in with the overall environment.

The largest pufferfish will grow about 90 centimeters (3 feet) long, but most of the time, they are usually quite small.

Most of them are deep brown on their upper portion of their body with white color on their underside. Lines and yellow spots are sprinkled all over their body.

There are more than 120 species of puffer fish found all over the world. Most of these fish are located in the tropical and the subtropical ocean waters, but some of the species are also found in the brackish and even in the freshwater.

They are located in the freshwaters of the South East Asia region and can even survive in the saltwater.

Many reports claim that the salinity range of 1.005 to 1.008 will make a significant impact on extending their lifespan.

The pufferfish is usually small in size, and the adult size is often fewer than 3 inches. When it comes to the sexual differences in the males and female pufferfish, it is almost impossible to tell them apart, even for the experts.

The only way one can be confident in which one is the female is when they lay the eggs, which is quite a rare occurrence since only a few cases of spawning have been reported while the fish is in captivity.

Their diet is probably one of the most demanding aspects of keeping this fish as a pet. Dried foods or flakes do not meet their dietary needs, and they have to be fed meat or other hard-shelled foods like crayfish, clams, daphnia, crickets, oysters, mollusks, scallops, plankton, shrimps, snails, and worms.

Since their teeth can become overgrown, as such, it is necessary to include hard-shelled foods in their diet to keep their beak from overgrowing.

While in their natural habitat, they generally eat crustaceans. 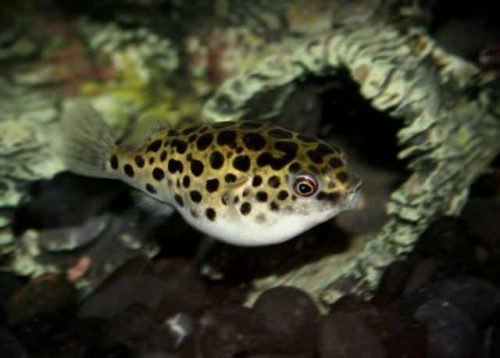 Even though the live feed is the best thing for them, some owners have however had success in giving them frozen food as well such as flakes and pellets.

They may also eat frozen and freeze-dried bloodworms.

There is not much known about the reproduction of pufferfish. They spawn very rarely in captivity and lay their eggs on a substrate or a flat surface.

It is also observed that the females lay the eggs in fine sediments in the center of the circle and then the eggs are fertilized by the males externally.

Then the females vanish, but the males stick around with the eggs for about six more days to guard the eggs.

For spawning in the wild, the males flap their wings and swim along the seafloor which results in circular patterns that measure about 2 meters (7 feet) in diameter, even though the fish are only 12 centimeters (5 inches) long. 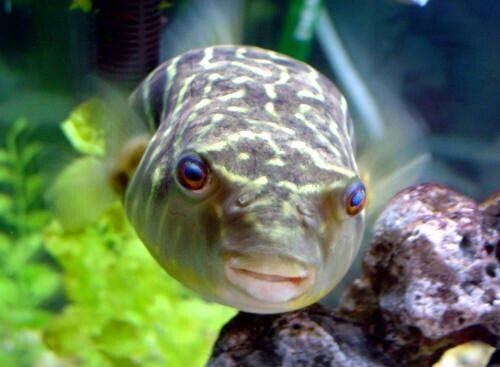 It takes around seven to nine days for the construction of these circles by the puffer fish. Then they are decorated by the males with shell fragments and fine sediments which gives a distinctive look and coloring to the circles.

The females base their decisions on whether they want to mate with the males or not, based on their circle construction skills. If they agree, the eggs are laid in the center of the circle and fertilized by the male externally.

Having a 20-gallon tank is ideal for one puffer fish, but if you plan to have other fish as well, then a 50-gallon tank is more appropriate. The sand and gravel should be spread evenly over the base of the tank.

Then other decor, rocks, and plants should be added so that there are plenty of hiding places. A heater should be attached to the back of the wall, inside the tank and diagonally for the best dispersal of heat.

The filter should be placed in the center or at the back of the wall. A mixture of tap water and Instant Ocean or marine salt should be used in a 10-gallon bucket or a large-sized container.

The temperature should be kept around 78 degrees F, and the lights of the aquarium should be on for at least 8-10 hours a day.

The pH of the water should be monitored as the pufferfish prefer slightly alkaline water, which should be maintained somewhere between 7.5 to 8.5 pH.

A handful of crushed coral or aragonite into the substrate also achieves this pH level. A water test should be conducted every week to make sure there is no ammonia or nitrate in the water because if they develop unchecked in the water, it can kill the pufferfish.

At least 25% of the water in the tank should be changed once every week, and beneficial bacteria solution may be added to the tank at the recommended dose, as a precaution.

The fish prefer well-planted tanks where they can set up their territories. These fish are not very strong swimmers and generally do not prefer a steady water flow.

Unlike most of the fish, the pufferfish can recognize and even respond to their owners.

They do, however, also get bored in the tank, which is why they need a lot of open space to swim and also require places in the tank where they can hide and explore.

They may become hard on the plants in the tank, due to aggressively attacking their food, which sometimes falls on top of the aquarium plants and decor.

As such, the aquarium should be decorated with sturdy plants and the owners should be ready to replace them often!

They are generally not well suited for a community water tank since they are a bit on the aggressive side.

Even those fish which are docile eventually become aggressive as they get older or at times when they are not well fed. A pufferfish can even turn on their tank mates and can chew them to pieces. 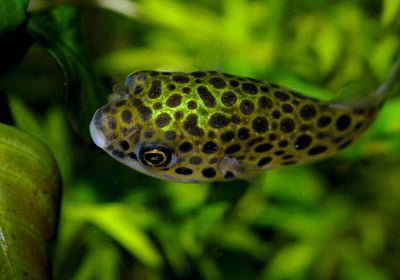 When they are kept in captivity with other fish, their suitable companions are knight gobies, bumblebee gobies, and mollies. In freshwater aquariums, they can get along with other fish such as sharks, barbs, and tetras.

In such a case, however, there should be plenty of space so that the puffers do not feel threatened. Overall, they are not ideal tank mates that can be successfully kept in a freshwater community tank.

A predator that can manage to snag this fish before it inflates would not be able to last long as these fish contain tetrodotoxin, which is a substance that makes them not only foul-tasting but also lethal to fish. This toxin even kills human beings and is 1200 times more poisonous than cyanide.