Pleco fish are also known as Hypostomus plecostomus, commonly known as pleco or the suckermouth catfish is a tropical fish. It belongs to the group of armored catfish that are a part of the Loricariidae family.

It is referred to as armored catfish due to the armor-like longitudinal rows of scutes (bony external plates or scales) on the upper parts of its head and body. There are over 150 species in this family and these are, to date, the most popular catfish to be kept by aquarists. There is a great demand for pleco in the aquarium trade.

Pleco fish is usually found in the freshwater streams. Their geographical range is from Panama to Uruguay in South America.

Except for suckermouth catfish, they are also named as Algae sucker/eater and janitor fish. 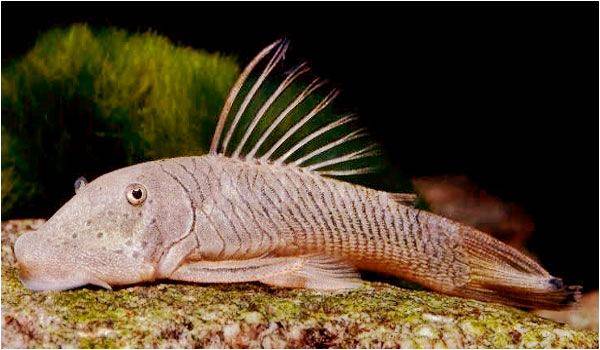 The significant thing to know about pleco is that these are nocturnal which means that most of the activity is observed at night. During the day, they like to hide amongst the plants, caves, or any hiding places installed in the tank.

However, as they are a bottom-dwelling fish, they can be found moving slowly across the surface. This makes them clean up the algae at the bottom of the tank i.e. they are named algae suckers.

pleco appear to be brown or grey. As of their size, they grow up to 24” in length in the wild and up to 15” in an aquarium.

Their body is covered with the bony plates like other members of the family. The lower surface of the head and abdomen are naked.

Their small eyes are high up on their head. They have a unique membrane over their eyes which is used to control the exposure of light. Moreover, their body is spotted or patterned. They have well-developed dorsal (on the upper part of the body), pectoral (paired; one on each side), and tail fins.

There have been 150 species of pleco fish discovered but not every type can be kept in an aquarium. The majority of these are native to South America, specifically the Amazon River basin.

They can survive in the freshwater or brackish rivers, fast-flowing streams, or rivers with the rocky substrate. Following are the most common aquarium ones:

To keep pleco fish in a tank or aquarium, several conditions are to be kept in mind so that they do not only survive but live.

The conditions of the tank should be set up keeping in view their natural habitat i.e. tropical waters of the Amazon River basin which consists of shallow streams and rivers that flow through forests. The water tends to be fast-flowing and has a lot of driftwoods and plants. Also, it has a regulated temperature and specific pH.

The size varies according to the species of pleco fish. Smaller plecos can live in a 10-gallon tank whereas larger species such as Bristlenose require at least a tank of 150 gallons.

Moreover, the common pleco grows very large, very quick. As it grows longer from 2-4 inches it needs a tank of at least 80 gallons and eventually, when full in size, up to 150 gallons.

The water temperature is usually not too critical to maintaining as plecos are not that much like the sensitive fish.

The water temperature needs to be kept between 22-30 degrees Celsius which is the same as the flowing water rivers of South America. The pH level of water needs to be maintained between 6.5-7.5. Furthermore, water has to be clean and well-filtered. Good quality canister filters can be used for this purpose. Also, strong water current is preferred.

pleco fish spends most of the time on the bottom or staying attached to the glass of the tank. They also attach to the rocks, decor, and other hard surfaces with their mouths.

The tank setup should also be considered according to the habits of pleco.

As they are nocturnal, they tend to sleep during the day. For that, they require some hiding places. Make sure that the tank has plenty of smooth hiding places. These hiding places can consist of flower pots, caves, hollowed logs, and a lot of plants.

Plecos have a habit to nibble on. The hardy and fast-growing plants like java moss are most likely to be grown in the tanks.

The driftwood is also one of their favorite thing to nibble on. This combination of plants, hiding spots, and driftwoods makes them feel safe and secure. It also keeps them fresh and healthy.

Considering the peaceful temperament of pleco fish, these can be kept in a community tank. The most ideal tank mates include:

It is not advisable to keep them with Discus and Angelfish as they would like to nip at them. Any smaller fish that can easily fit into pleco’s mouth should not be kept with them in the tank as eating smaller ones is their favorite thing to do. Moreover, the pleco fish can be kept with other pleco fish. But, keeping in view the size, a tank of approximately 300 gallons tank would be required for two pleco fish.

As pleco fish is omnivorous, it can eat both vegetables and meat. Therefore, their diet needs to contain vegetables, algae, meat, and live food. Some high-quality pellet food can also be added to their diet.

As for vegetables: lettuce, spinach, zucchini, shelled peas, and cucumbers are their favorite ones. For live foods, bloodworms, earthworms, crustaceans, and larvae make great food. They require a lot of fiber for good and healthy growth. Moreover, driftwood should always be made available as it helps them with digestion by nibbling on it.

Being nocturnal, pleco fish feed at night. So, do not forget to put food for them in the evening as it becomes dark.

Breeding common plecos are incredibly difficult as they do not get ready for mating easily. As they grow, they become more aggressive towards mating. At times, a large number of hiding places work.

pleco fish are egg layers. In the wild, plecos breed in the river bank caves. Therefore, large hollow caves should be built in to reduce their aggression. Once a female pleco is enticed by the male pleco after he cleans up the cave. 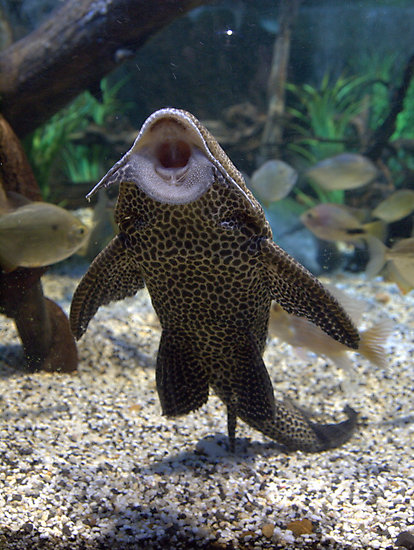 The female pleco lays eggs in the cave which is guarded by the male until the eggs are hatched.

The fry should be fed with infusoria for the first few days. After that, they can be fed with available fry foods in the market or regular food.

The health of pleco fish comes with a proper tank setup. There is a need to maintain good water quality, adequate filtration, and avoiding overcrowded situations. Following are the signs of healthy pleco:

Some unhealthy signs include:

Dropsy and fin rot is a bacterial infection. Bloating and color loss are major signs. It can also be caused due to the improper diet of pleco fish. Feeding the better quality food and improving water quality helps with dropsy. 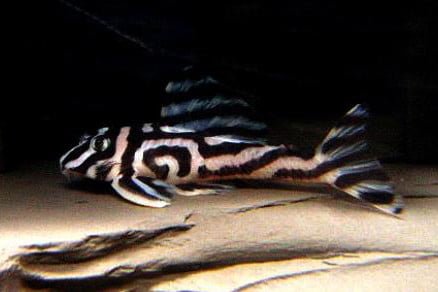 Itch or Fish Fungus is the skin infection caused due to an increased number of protozoans and water molds. Low water temperature and infrequent water change cause the fungus to multiply.

This requires changing the water frequently, maintaining the required temperature and proper medication to stop the fungal infection.

Protruding eyes are also a symbol of bacterial infection which can easily be treated by providing vitamin-supplemented food and limit the exposure to activated carbon.

Keeping in view the above discussion, it can be observed that pleco fish is not difficult to keep. It does not come with any hard or sensitive conditions and requirements. They do not have any complex care needs.

Also, if you want to keep a single fish in your aquarium, you are good to go with pleco fish. They do not like mating and breeding much. If not for business, pleco fish is one of the best fish to keep in aquariums. 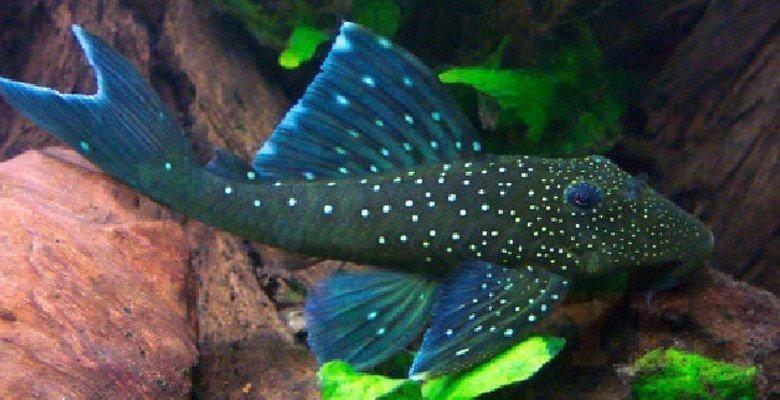 The only problem that comes in keeping pleco fish is its size. It makes them unsuitable for every enthusiast, but experienced fish keepers will be able to keep them well. Make sure you are good to go with the necessary skills and requirements before you get one!