Pipefish (Syngnathinae) are unique looking fish which are sometimes overshadowed by the seahorse. This fish is an excellent choice for the moderate or experienced fishkeepers who are looking to keep something different.

The pipefish, belong to the same family as the seahorse but is not part of the 47 different types of seahorse species, yet they share quite a lot of similarities.

Many of these fish are weak swimmers in the open water and move quite slowly through rapid movements of their dorsal fins. 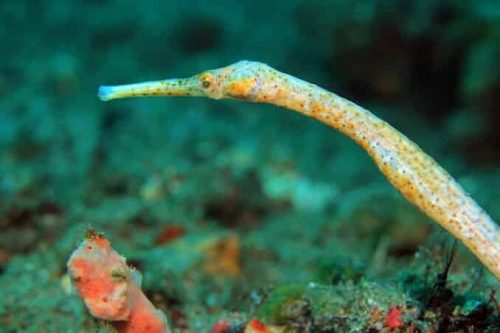 Many species of the pipefish have a prehensile tail, as the seahorses do and others have some form of a caudal fin which can be used for locomotion.

The flagtail pipefish have a more developed caudal fin and are strong swimmers.

They are straight bodied seahorse-like fish, with tiny mouths. Their name is derived from a unique type of a snout which is similar to a long tube and ends in narrow and a small mouth. The mouth opens upwards, and there are no teeth present.

The body and the tail are both thin and long, like a snake. They have a modified skeleton formed into armored plating and have quite a few longitudinal ridges due to which a vertical section of the body looks angular, rather than oval or round.

There is always a dorsal fin present in these fish and some species and it is the only organ for locomotion. 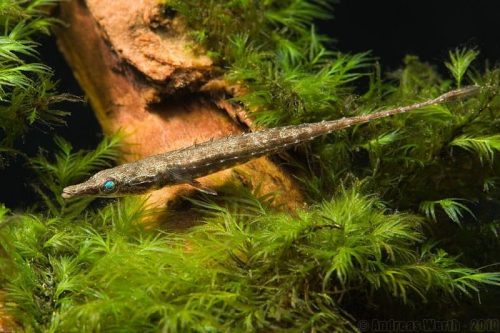 There are no ventral fins, and other fins may or may not develop as it varies. The opening of the gill is tiny and is placed near the upper posterior angle of the gill cover.

Some of these species have a prehensile tail, while many others do not. There are around 200 species of the pipefish and are present in a variety of colors.

Most of the time, when people opt for these fish, they do for the brightly colored ones. These fish may be in colors such as red, orange, purple, brown, black, green, and purple. Many pipefish are observed to change their colors to blend in with their surroundings.

Most pipefish can be found in the tropical or the subtropical salt waters. When they are in the wild, they are generally seen in eelgrass, lagoons, coral reefs, and seagrass.

They may use reefs or grass to camouflage and to protect themselves from their predators and also for sucking in their unsuspecting prey. 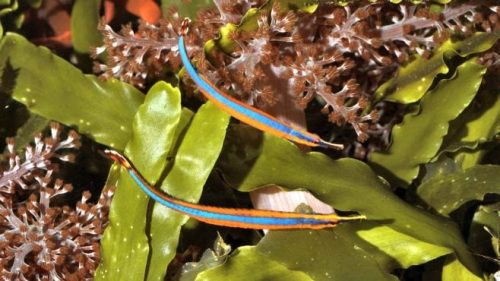 There are a few species of the pipefish that can survive in the freshwater as well, but that is quite rare. Most pipefish prefer brackish or marine water. They require slow water currents to move around as they are weak swimmers.

The pipefish can be considered to be visual eaters and as such, they need ample light to find their food. They are not very good at competing with other fish for food which is why they should be kept in a tank with either seahorses or other pipefish.

They are carnivores and use their long snout through which they can suck in crustaceans and planktons, small shrimps, amphipods, copepods, and other live feed.

The larger sized pipefish may also eat other small fish, and the freshwater pipefish may eat worms and insects as well.

Moreover, due to the slim shape of their body, the pipefish is good at getting in all nooks and crannies, but their digestive tract is quite short which means they need to be fed little and often.

If they are not fed enough, then they will run out of energy very quickly. 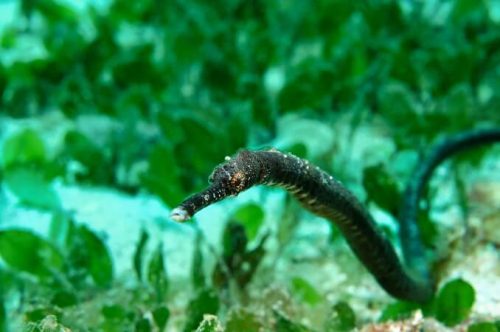 When the pipefish is put into a new aquarium, they should have some live food already present for them even if they are well fed with frozen food since a new environment may set them back, and they may refuse to eat the frozen food.

They feed on a variety of foods, and it is best if the food chosen has originated from a marine environment and it is rich in highly unsaturated fatty acids.

The food which is rich in such fatty acid is Vibrance which also contains vitamin C and other minerals as the freshwater organisms lack such acids.

The pipefish should be fed small amounts of food, at least three times a day. You mustn’t put too much food for them since it may not get eaten and the tank will end up becoming dirty.

The water tank for the pipefish should have saltwater with plenty of grass, rocks, and coral to hide in. There should also be caves for hiding and overhangs to provide shelter, and it should also be colorful to replicate the natural environment which these fish are used to.

It is best to keep them in groups or pairs, and as such, it should be a species only tank, but it can include seahorses as well.

The water temperature should be maintained at 72oF – 77oF as the pipefish originate in tropical waters.

The pipefish requires alkaline water as pure water has a pH level of 7. They are generally not easy to care for as the pipefish is one of the few fish which do not handle the transition from the wild to captivity well.

One of the reasons why they take the time for this transition is usually because they are not fed well during transport. When you do select your pipefish, you must check for possible signs of bacterial infections.

There should be no cloudiness in its fins, skin or eyes. You must also ensure that it is not breathing rapidly, which can signal distress in the fish and may even be a symptom of bacterial infection.

Generally, the males and the females appear to be eager to mate with each other when they come into contact.

Before the process of mating can happen, there have to be various rituals that need to be followed for the courtship.

The male and the female have to be moving at the same speed and in the same movements before the female can pass the eggs to the male.

The gestation period of the pipefish however varies, depending upon the number of young ones that are going to be born as well as on the subspecies.

There are also those species of females that may mate with several males, and the female can deposit eggs with all of them, and this way, the number of young which are produced increases.

The male carries the young, and right after they hatch from the eggs, the young ones are left to fend for themselves.

Many times, they end up being the food for the new parents or become victims of other predators. This means, less than 1% of the young ones actually will reach maturity and continue their life cycle.

Different types of behavior can be expected from a pipefish in captivity. They may slither through the grasses and across the floor similar to a snake, especially when they are looking for food.

Moreover, they are excellent at mimicking the environment they are in, so it will not be surprising to see them adopt a vertical position with their head down before attacking their prey if there are vertical plants in the aquarium.

They may also move in a horizontal bullet sort of way when they want to move very quickly when they spot their prey which they want to catch. With this type of behavior, watching the pipefish can be quite entertaining, especially when you have a pair. 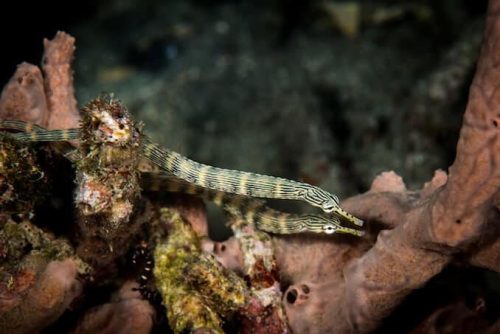 Pipefish should be kept in a tank with only other pipefish or with seahorses. It may be possible to keep them with other fish as well, but it is not recommended as they may have to compete for food.

As pipefish are slow swimmers, they may not be able to do so well. Aggressive or territorial fish should be avoided at all costs, and the pipefish should not be kept with maroon clowns, pufferfish or clams. Pipefish should be either kept by themselves or in pairs, depending on the species.