Pearl Gourami is considered to be one of the most beautiful fish among aquarium keepers. Males are especially attractive during spawning. At this time, the male has a more pronounced bright red color of the abdomen and throat, which beckons aquarium lovers.

Thanks to the special breathing apparatus, the gourami can breathe air. This makes him very different from other fish. The next distinctive ability is the ability to build small “nests” from the foam, where they grow their offspring. 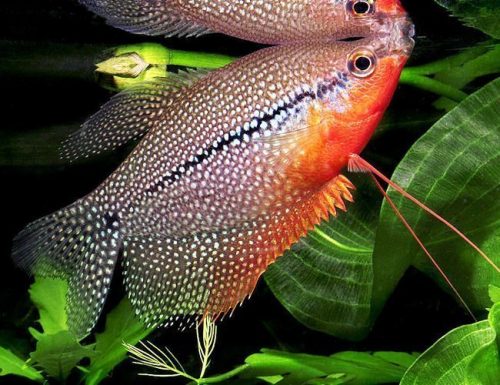 During spawning, the fish can make various sounds, but scientists have not yet been able to understand the nature of such actions.

Fish of this species can grow up to 12 centimeters in an aquarium, but usually, the length does not exceed 10 centimeters. In addition, the fish are endowed with a certain intellect, which allows them to recognize their master.

Do not be afraid of the size of pearl gourami. Although they are quite large, they are very calm. If there are other species in the aquarium, then the fish may first be timid.

The first time this species was described by Blecker in 1852. It is believed that these fish come from Thailand, the islands of Borneo and Sumatra.

Due to the fact that man greatly pollutes nature with his reckless actions, this species was listed in the Red Book. Due to pollution, a lot of fish of this species simply died, and catching such a fish in nature is a very rare occurrence.

Pearl gourami, which is available on the market for purchase, as a rule, were not caught in nature – they were grown on special farms.

In the wild, the fish live in swamps and rivers, as well as in the lowlands. Water for wild representatives should be acidic and abundant in various vegetation. There they feed on various insects and larvae.

Both pearl gourami and lalius (a related species) can prey on insects that do not live in water. If flying near the water, then the individual releases a thin stream of water into it, thereby knocking it into the water.

The fins that are located on the belly makes the fish feel everything around them as they are very sensitive.

The color of the fish is red-brown or just brown. The name pearl gourami received because of their appearance.

The maximum size of home gourami is 12 centimeters, but in practice, they usually do not grow more than 10.

Pearl Gouramis can adapt to different habitats. With normal care and feeding, timely cleaning of the aquarium, gourami can live up to 8 years. This fish eats any food and can eat hydra, which enters the aquarium with the food.

Pearl gourami is considered the most whimsical among all gourami fish of this kind. They just require normal living conditions.

Pearl Gouramis are omnivores by their nature. In nature, they eat larvae and insects that they are able to catch.

In the aquarium, they can eat artificial and natural feed. It is artificial food that can be used as their main diet, and sometimes you can feed them with frozen bloodworm, tubule maker, or artemia.

Another feature of this species is the presence of a small mouth. It is worth choosing food carefully. They cannot eat too large particles. 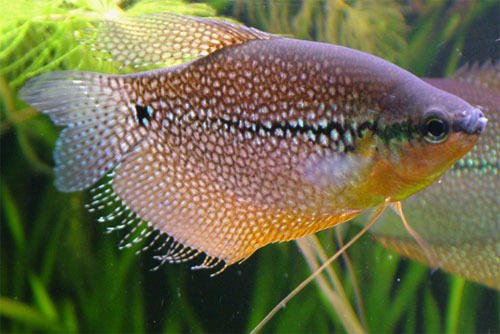 These fish do not become aggressive even when they are spawning. It is worth keeping in mind that they are timid and will not fight for food.

Make sure that they eat and other tankmates do not interfere. They can hide in a new place for a long time until they feel completely safe. It is better to keep them with fish who are similar in size and behavior.

They get along well with Angelfish. You should not look at the fact that angelfish are somewhat pugnacious.

Paradox – do not combine several types of gourami fish. They can start to conflict and fight.

Betta Fish – gourami may be neutral towards them, but remember that Betta is belligerent in nature. It’s better not to keep them in the same tank. 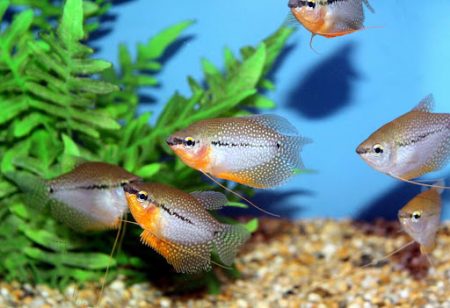 Great tankmates can be neon tetra and shrimp. But the shrimp should be quite large, otherwise, there is a risk that they will be eaten.

The male and female pearl gourami have several differences. The male gourami has a brighter and more outstanding coloring, it is much larger. Males have a pointed tail, while females have a rounded tail.

During spawning, males have a brighter neck, and females get a more rounded belly.

Breeding pearl gourami is a fairly simple process. When the breeding season begins, the males acquire a very bright color, this is especially noticeable in the throat and abdomen.

If there are several males during spawning in the aquarium, then be prepared for numerous fights for the female.

Their fight is quite funny – two males swim around each other and suddenly mate with their lips. It is very much like a kiss. Then they again begin to swim.

When the spawning period begins, the male and the female, plump from plentiful feeding, need to be relocated to a separate aquarium, which must also be abundantly planted with plants.

Feeding during this period should be especially enhanced and you should add more live and frozen feed.

To grow offspring, gourami needs a nest. An excellent solution would be to launch Recchia on the spawning surface, which is perfect for this purpose.

As soon as the female swam up, the male hugs her and begins to squeeze her eggs, while at the same time inseminating her. For one spawning, the female can lay up to 2000 eggs.

After mating, the female can be removed to the previous aquarium, but it can be left as the male will no longer chase her.

The male gourami is very caring. Caviar is much lighter than water and can float to the surface, but the male catches it and carefully places it in the nest.

Fry should be fed a micro worm and infusoria until they can eat artemia. At this time, in the aquarium, you need to maintain a temperature of 29 degrees and you can already raise the water level. Malkov is better to sort since among them there are frequent cases of cannibalism.