Peacock Cichlid (Aulonocara) is a species of the Astatotilapia genus with as many as 22 special varieties found in nature. These species can be identified based on their elaborate pattern and color schemes.

They’re specifically known as being one of the most colorful fish to be kept and this makes them a popular choice for displaying in aquariums.

The Peacock Cichlids elongated fins are an adaptation that allows it to swim better in Lake Malawi’s special conditions. Its elongated fins allow it to move swiftly even in hard water with relative ease and speed.

The elongated body of the fish itself allows it to better maneuver through rocky environments as efficiently as possible.

Peacock Cichlids are omnivorous by nature and have a vast array of dietary sources. They’re largely classified as bottom dwellers and tend to pick off food from the seafloor.

They can feast on herbivorous options such as seaweed and red algae as well.

Likewise, they have a predatory carnivorous tendency for smaller sea life such as crustaceans, larvae, zooplankton, and insects among other things. The adaptive nature of the fish’s feeding habits means it can survive on various sources of nutrition. Peacock Cichlids can consume just about any food source they’re provided with, including manufactured food.

However, some exceptions do exist for them in the form of mammalian meat and tubifex worms. These are known to cause the Malawi Bloat which results in abdominal swelling and bloody ulcers with a substantial risk of death.

Depending on the species, possible color schemes can include blue, yellow, gold, and orange. The coloring on the Peacock Cichlid’s skin is iridescent as opposed to being a fixed color shade. 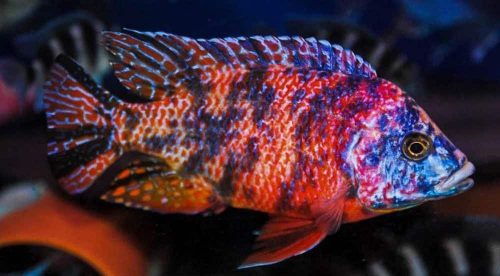 Large color differences can be seen in different varieties of the fish, depending on the living conditions, nature of the habitat, and interactions with other marine life.

Only the males of the Peacock Cichlid exhibit any color, females and young fingerlings are found to only be found in dull grey color. The males transform as they mature to present various colors while the females remain grey.

Peacock Cichlids are typically found to have elongated bodies with a lateral line system. Most species have been observed to have a high back.

The Peacock Cichlid is native to Lake Malawi of the East African Rift system. The specific nature of the Peacock Cichlid’s preference for this particular habitat makes it rarer to be found in other neighboring water bodies.

For Peacock Cichlids to thrive, they require the natural conditions of the Lake Malawi to exhibit proper growth and maturation.

These fish prefer a slightly alkaline pH that ranges anywhere from 7.5 to 9.0. A lukewarm water temperature of around 75 to 81°F (24 to 27°C) is optimal for most Peacock Cichlid species.

Peacock Cichlids tend to dwell in areas of the lake characterized by natural rubble. These rocky environments contain a considerable abundance of sand and rocks that the fish has been known to inhabit.

The high density of minerals in the Lake Malawi causes an increased level of water hardness in the areas inhabited by the fish. Peacock Cichlids are accustomed to swimming in water with a hardness of 10 to 20 dH. 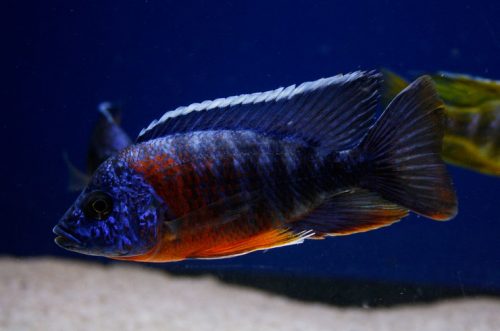 The maximum size of males is 12 cm, females – 9 cm. The body of the fish is bright blue, behind the gill covers there is a wide oblique stripe of red color, for which the fish got its second name – “red-shouldered peacock”. Females are modestly painted – gray-brown with dark transverse stripes on the sides.

The recommended volume of the aquarium is 150 liters, with a sandy substrate. It is best to keep a small harem of males and several females. Other proportionate cichlids are treated calmly. 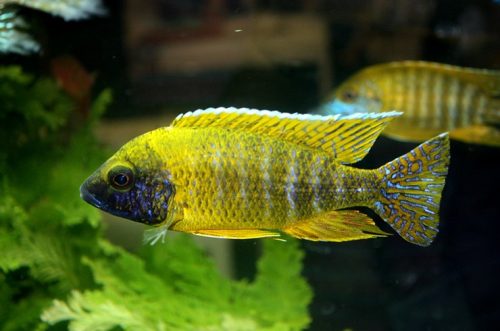 Yellow Regal Peacock was named after the founder Dr. Ulrich Bensch. This is a medium-sized cichlid whos maximum length in the aquarium is 13-15 cm.

The fish has a bright yellow color with bluish stripes on the tail and body. The lower part of the head and mouth are also colored blue.

This is one of the least aggressive African cichlids, even during spawning able to get along with neighbors in the aquarium.

However, males can be at enmity with each other. It is possible to keep several males only in large aquariums with a large number of shelters. There should be 3-6 females per male. 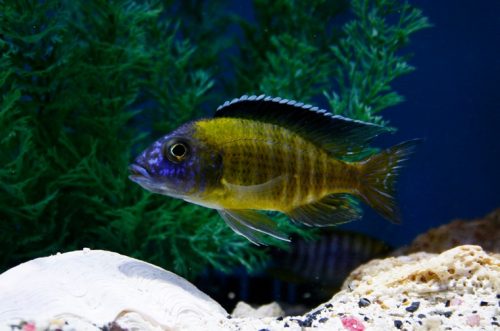 Their size in the aquarium ranges from 12 to 15 cm and females are gray. Males are distinguished by a wide variety of colors, more than 100 varieties are known. The males acquire maximum brightness by 2 years.

They live in nature at a depth of 15-20 m, prefer a sandy bottom with piles of stones.

To keep a pair of aulonocaras, you need an aquarium of 150 liters. The fishes are relatively calm, but during the spawning period, the males zealously defend their territory. Aulonocara Red ruby ​​is another result of the work of breeders. Their Body length is 12-15 cm. Females are not bright, have a beige or orange color.

Males are characterized by a bright red color with noticeable light stripes and a blue head. Keeping them is no different from other aulonocaras. 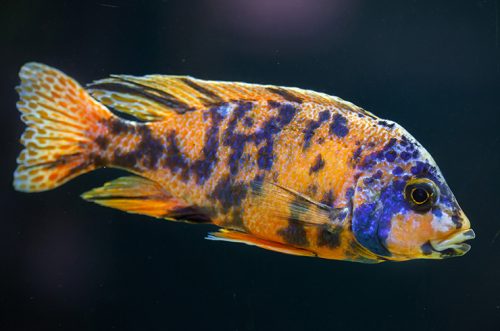 As the name implies, these forms of Aulonocaras are distinguished by an unusually variegated color. There may be yellow, red, orange, black, blue spots located randomly.

Each of the fish has a unique pattern. Females also have a “spotted” color, but the color of their spots is not so bright. The fish were obtained by crossing several species of Aulonocaras.

This type of aulonocara grows up to 8-10 cm. The color is dark, gray-blue. A wide strip stretches from the head to the tail along the upper body. Depending on its color (white or yellow), two subspecies of the aulonocara of Mayland are distinguished.

The minimum volume for keeping a group of fish is 100 liters. It is best to keep small harems, where 3-4 males are males, as males compete with each other for territory. With other types of lake Malawi (excluding the Mbuna group) they get along well. 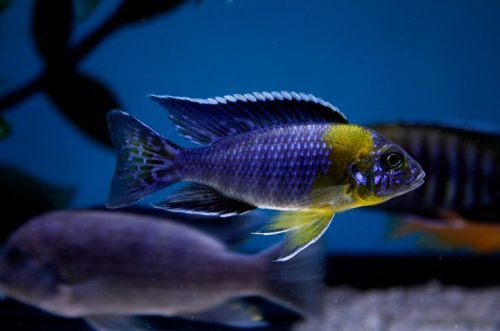 In nature, These fishes prefer sandbanks at depths of up to 5 m. It feeds on small invertebrates living at the bottom.

The length of their body is 10-15 cm. The color is blue, behind the gills there is a yellow stripe surrounding the body. For keeping this fish, a volume of 100 liters or more is required.

The best soil to use is sand. The scenery can be made of stones and sandstone. Caviar is incubated in the mouth. Life expectancy up to 15 years.

These fish have a highly developed predatory sense that facilitates their hunting of lower marine life. They tend to hover low over the sand and use their keen senses to detect movement and attack prey.

These fish are usually classified as a peaceful species, integrating with other members of its species well. However, the Peacock Cichlid has been observed to be largely territorial and will exhibit aggression if provoked.

Marine life forms that invade their habitat are considered a threat by the fish and will be subject to physical attack.

Males can be distinguished from females by their colorful appearance. This appearance is essential to their mating ritual which involves the male performing for a female at a cave entrance.

If the male is successful in gaining the female’s attention, she will follow him into the cave. The female then lays eggs where they will nest.

The male promptly fertilizes them while the female collects them in her mouth. The female will incubate the eggs for 28 days while staying inside the cave.

After the incubation period, the eggs will hatch with about 12-50 fingerlings.

Peacock Cichlids tend to be fairly independent for most of their life. The mother will typically leave the fingerlings to fend for themselves shortly after birth.

They assimilate well with other marine species and exhibit a docile behavior for most of their lifespan.

To keep Peacock Cichlids in a tank, a tank capacity of at least 55 gallons (208.2 liters) is needed. Adequate space is essential when keeping this species in a tank, largely due to its territorial nature.

Peacock Cichlids will usually pick a cave or rock formation to establish as its territory. This is also why it’s important to have enough sand, rocks, and substrate to match its natural habitat.

The water’s physical and chemical quantities must match that of Lake Malawi to avoid any stress during the breeding period. Lake Malawi is a clear freshwater lake with slightly alkaline water quality.

A pH between 7.5 and 9.0 is preferable for Peacock Cichlids depending on the species. These fish live in highly mineralized waters with a hardness of around 10 to 20 dH.

When placing them in the aquarium, the hardness levels of the water should not drop below 4 to 6 dH.

Peacock Cichlids have an affinity for lukewarm water temperature similar to those they are used to inhabiting in the lower regions of Lake Malawi.

The temperature of the water in the aquarium should stay between 75 to 81°F (24 to 27°C) for optimal growth and breeding conditions. 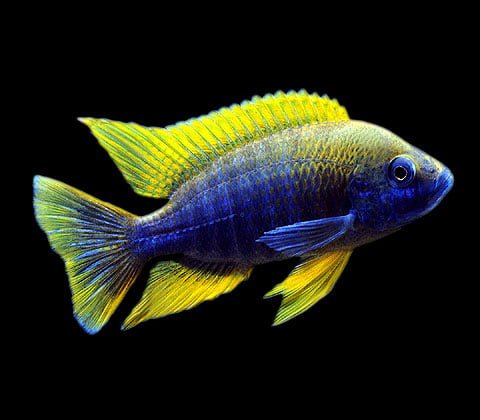 Peacock Cichlids exhibit docile behavior most of the time. They can live in harmony with other fish or other members of their species.

A ratio of 1 male to 4 female is preferable when keeping Peacock Cichlids together for breeding purposes.

These fish will exhibit territorial behavior toward certain areas of the tank. It can turn to aggressive behavior if provoked or if its territory is invaded.

However, this kind of behavior is largely defensive and doesn’t lead it to attack unless it feels threatened.

When choosing tank mates for the Peacock Cichlids, it is important to keep the water conditions in mind and select a species that can withstand them.

For this reason, a lot of people will prefer to put other species that are also native to Lake Malawi and can withstand the conditions of the natural habitat.

However, pairing active fish with a tendency of aggressive behavior can cause conflict between the two species.

Generally speaking, certain varieties of fish such as Pseudotropheus, Labeotropheus, Petrotilapia, Mbuna, angelfish should not be placed with Peacock Cichlids.

As we discussed above, One should keep fishes from Lake Malawi with peacock and ideal tankmates for peacock cichlids are Loaches, Rainbow Shark, Rainbow Fish, Pleco Fish, etc..

The Peacock Cichlids is an ideal aquarium fish owing to its easy assimilation, its peaceful behavior, and its beautiful color and patterns.

As long as proper tank conditions are maintained, and territories are well established, these fish are simple and hassle-free to take proper care of.

This makes them highly preferred among both new and experienced aquarium hobbyists looking to add some color to their tanks.