Parrot Fish are part of the marine species which are generally found in the tropical and shallow subtropical oceans all over the world.

These fish reportedly have either eighty to ninety-five species in total and their largest species are found in the Indo-Pacific. They are found in the rocky coasts, coral reefs as well as in the seagrass beds and play an important role in bioerosion.

With their birdlike beak, they can clean up and scrape the reefs, helping to curtail the overgrowth of algae in the reefs. They are elongated with a blunt head and are deep-bodied and are often found in very bright colors.

The Parrot Fish is named for their dentition which is quite different from the other types of fish and they include other labrids also.

They have many teeth that are arranged in a manner which is a tightly packed mosaic which is on the external surface of the jaw bone of the fish, thus giving them a parrot-like beak through which they can rasp algae from the rocky substrates and from coral (which causes bioerosion).

The maximum size of the fish usually varies between the fish; however, the majority of the species are around 30-50 cm (12-20 in) in length. 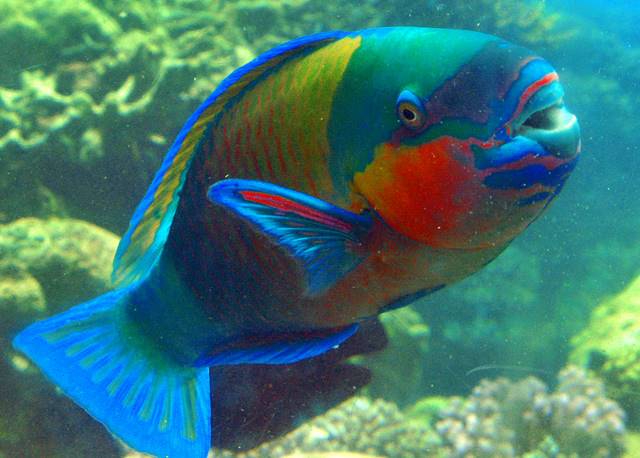 There are however some species which may have the length that reaches around 1 m (3 ft 3in) and in fact, the green hump head parrotfish may reach up to the length of 1.3 m (around 4ft and 3 inches). The smallest of the species is the blue lip parrotfish which has a maximum of 13 cm (5.1 inches) of size.

The parrotfish have a great fashion sense!

It is because of them which makes scuba diving so wonderful and colorful. Each of the species has a varying color scheme and they change their ‘outfits’ as they get older. They usually have a different color pattern as they become form babies to adolescents to adults.

The parrotfish are generally herbivores, which means they feed mostly on the epileptic algae. The diet of the parrotfish is the coral diet which consists of the algae that are extracted through the chunks of the coral which is ripped from the reef.

The coral is pulverized with the grinding teeth in the throats of the fish to get the algae-filled polyps inside. Most of the sand in the range of the parrotfish is generally ground up and the undigested coral which they excrete.

The parrotfish spend the majority of their day nibbling which means they end up cleaning the reef. This is very important as most of the reefs in the Caribbean (as well as across the tropics) have become full of algae since there are not enough of the parrotfish or other herbivores that can clean it up.

After the parrotfish is eating all day, they end up pooping fine white sand and a lot of it! 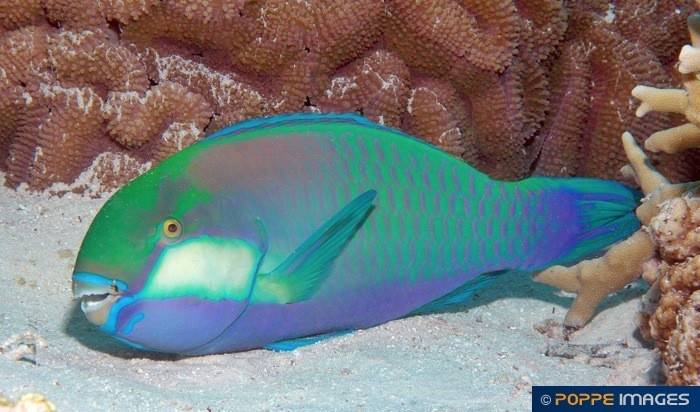 They can change the sex repeatedly throughout their lives and the patterns and the colors of the fish, through which they are classified also varies, between all species and genders whether it is the females or the males and even the young fish.

In a nutshell, the parrotfish is quite open to sexual orientations and they are quite proof that heterosexual monogamy is not the status quo of nature.

Parrot fishes of most of the tropical species form large schools when they are feeding and these are grouped by the size.

The harems of several female parrotfish are presided over by one single male which is quite common in most of the species and the males usually defend their position from any external challenge. 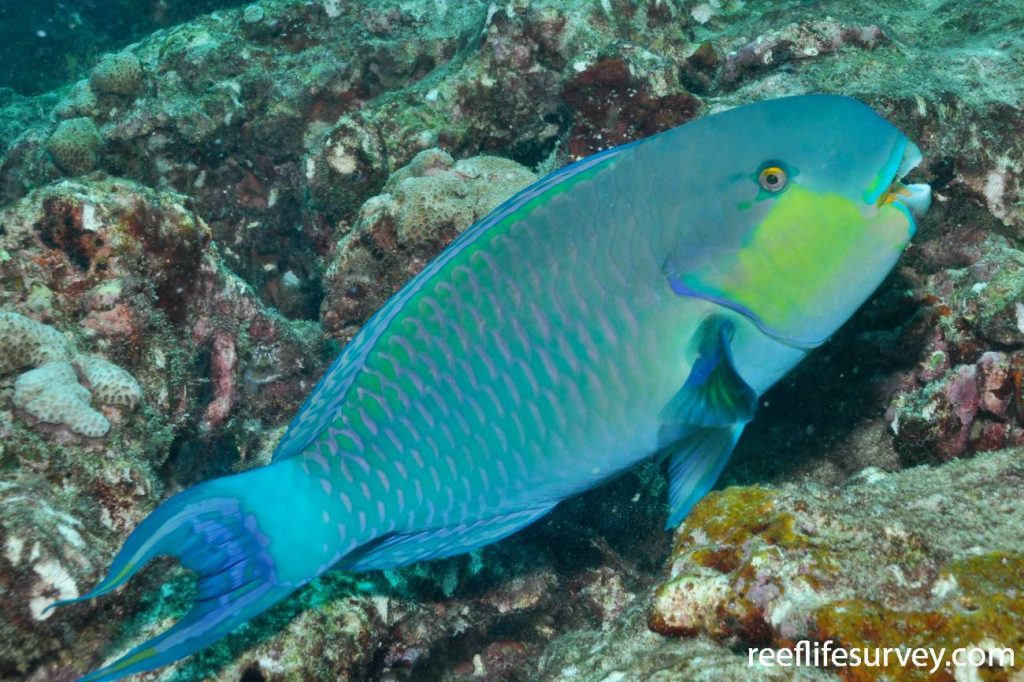 They release small eggs in the water which ends up becoming the plankton and these eggs float freely in the water and settle in the corral until they are ready to hatch.

These fish as mentioned earlier change their sex as they get older but the largest fish is a male, which is also, unfortunately, the most targeted fish. This means, fishing the target which is the biggest male fish makes it difficult for them to reproduce and grow.

These are like the nighttime pajamas for the fish. There is a distinct quality of the parrotfish; every night a particular species of the parrotfish envelopes themselves in a type of a cocoon that is transparent looking and is made up of a mucous which is secreted through one of their organs that is found in their heads.

The queen secretes a mucus cocoon before going to sleep and some of the species excrete the mucus from their mouths which forms a protective cocoon that envelope the fish.

The scientists think that the cocoon can mask their scent, which makes it difficult for the night time predators, such as the moray eels to find them. 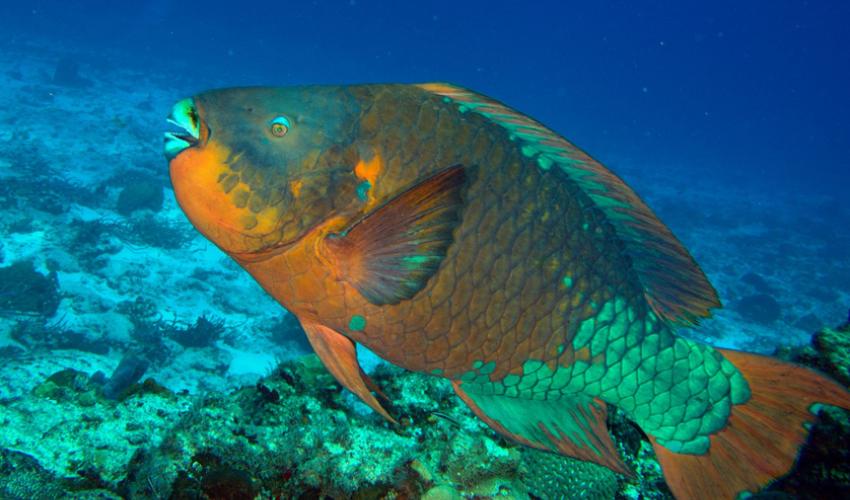 The skin of the parrotfish is covered in another type of a mucous that may also contain some antioxidant properties which may also help repel parasites, or in the repairing of bodily damage and also in protecting from UV light rays.

Parrotfish can be called as the close relative of the wrasse and are abundantly found around the tropical reefs in almost all of the oceans around the world.

The total identified species are about 80 and they all range in their sizes from less than 1 feet to about 4 feet in length.

Parrotfish as food is rarely consumed in the USA while it may be considered as a delicacy in many other parts of the world.

For example, in Polynesia, it is served raw and used to be considered as royal food which was to be eaten by the King only.

The Parrotfish used to be considered as a family level taxon, Scaridae. Even though the evolutionary and the phylogenetic analysis of these fish are still going on they are now being accepted as a clade in the tribe of the Chiellini and are popularly known as scaring labrids.

Certain authorities maintain the Parrotfish as a family level taxon which results in the Labridae to not be monophyletic. However, as per the world register of the marine species, their group is split into two subfamilies which are:

There is a commercial fishery that exists for some of the larger tropical species, especially in the Indo-Pacific.

The protection of parrotfish is seen as a way of protecting the Caribbean coral reefs from being overgrown with sponges or seaweed. Even though they are found in a variety of distinct colors, their feeling behavior makes them unsuitable for the marine aquariums. 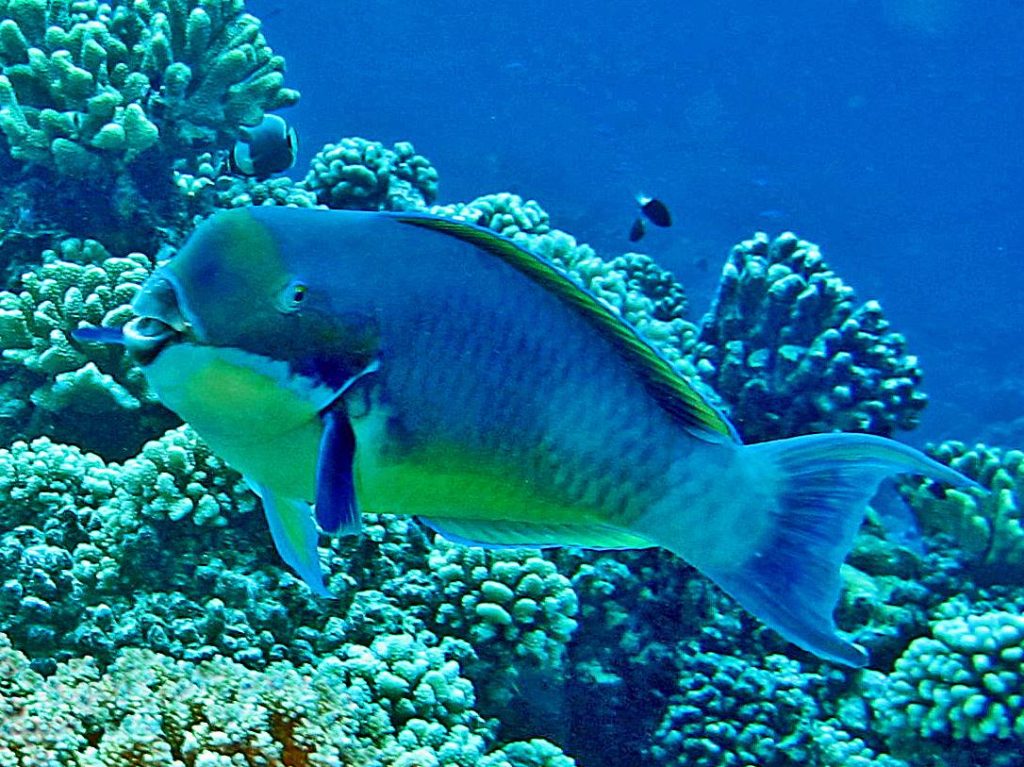 According to the latest research, the Parrotfish are highly important for the Great Barrier Reef as the Parrotfish is the only fish species that perform the task of cleaning and scraping the coral reefs regularly.

Protection of the Parrot Fish

The number of the parrotfish is, however, being depleted and the algae levels have become high due to which they can’t be fished sustainably at the moment anywhere in the Caribbean.

These sand pooping, algae-eating fish needs to be left in the ocean and when these fish are left on their own to chomp away, they do a brilliant job at it.

The local government of Barbuda has passed a law that protects the parrotfish and makes it illegal to either buy or sell or catch or even have the parrotfish in your possession. Moreover, about 33% of the coastal area is now being protected by the marine reserves and they have prohibited the use of nets on the reefs.

Mayan Cichlid (Cichlasoma urophthalmus) also is known as the Mexican mojarra belongs to the Central American cichlid family. It is...