Otocinclus Catfish are also known as Dwarf Suckers or Oto Catfish. To maintain the cleanliness of the aquatic environment for a long time, experts advise you to get Otocinclus Catfish, which eat algae formed on stones, decorative elements and the walls of the tank. The homeland of Otocinclus Catfish is considered Argentina and Venezuela. Some varieties of fish boast Brazil, Paraguay, and Peru.

Otocinclus Catfish inhabits small streams and clean rivers with a weak current, where they eat algae and fouling at the bottom of watercourses.

Typically, catfish can be seen off the coast, where they hide in small-leaved plants. Using suction cups, they cling to broad-leaved thickets, stones, and other underwater objects. 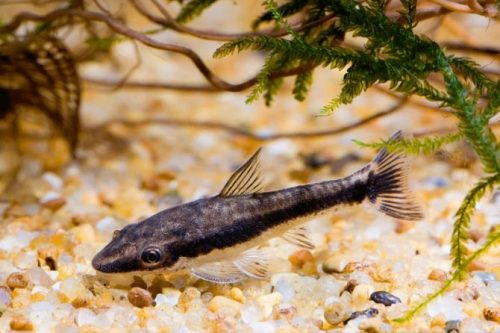 Otocinclus Catfish live in packs which can be as big as several thousand individuals. Flocks feed in the shallow sand, where there are many plants and snags. These Catfish feed on periphyton and algae.

Otocinclus Catfish acts as a striking example of an aquarium cleaner. The length of his body is 5-5.5 cm. The shape of the body of the fish is similar to a spindle. Otocinclus is also called dwarf suckers or Oto catfish.

These cleaner fishes have an interesting color. Their side plates have a gray-yellow hue, and the back is covered in dark color. The vulnerable abdomen of gray-milk coloration is devoid of platelets.

Along the body from the sides, there is a dark strip, passing at the tail into a spot, which may differ in different species in shape and size. Small fins are characterized by transparency. 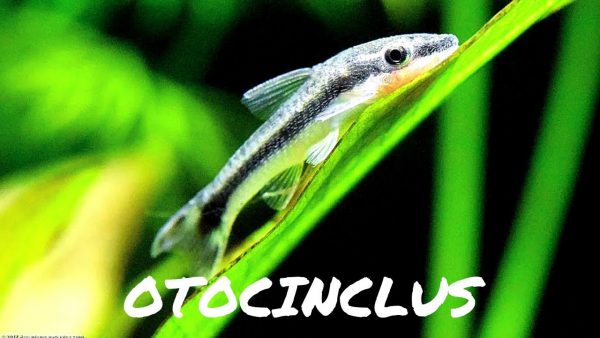 An interesting feature of Otocinclus is intestinal respiration. Catfish have an air bubble, with the help of which they inflate their esophagus and float to the surface.

With a lack of gill breathing, the catfish often swims on top of the water to breathe. This serves as a signal that the water is poorly saturated with oxygen.

Even beginners can determine the gender of these cleaning fish. It is enough to look at the fish from above: the males are small in size and elegant in shape, and the females are larger, wider, and rounded.

Deciding on the gender of aquarium pets is quite easy, but experts recommend keeping a flock if you plan to breed Otocinclus.

After some time, the catfish themselves are divided into pairs.

Little cleaners try to stay in the thickets, on the walls of the aquarium, and on the stones on which they scrape off various fouling with the help of their mouth-suction cups. Catfish have small teeth, so they do not damage the plants.

There are about 18 species of Otocinclus Catfish, but only a few of them are purchased for the aquarium. There are very few differences between the varieties of Otocinclus. They differ only in small deviations in color and size. 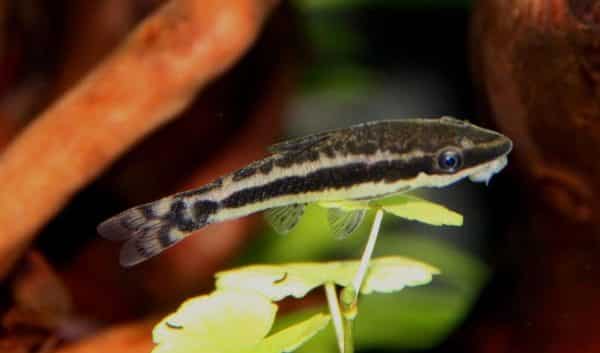 Most often, aquarists choose the following types of Otocinclus Catfish:

1- Otocinclus Affinis: Aquarists acquire these cleaners quite often. The body of catfish reaches a length of 3-4 cm. The species is distinguished by a silvery-yellowish color and the presence of a brown stripe on its sides. On the gray-beige back, there is a brown speck and light marble spots. Transparent fins cast a greenish tint.

2- Speckled Catfish or Otocinclus Flexilis: The body of the catfish is characterized by an olive-gray or gray-yellow color. On the back, there are numerous spots of dark color. The fish has intermittent side stripes.

3- Otocinclus Arnoldi: Inexperienced aquarists often confuse this species with Affinis. Arnoldi is distinguished by spots of a dark brown hue.

4- Dwarf Oto: Individuals of the smallest species grow no more than 2 cm in length. Acquire them only for small tanks.

All types of Otocinclus Catfish get along well in an aquarium and are able to cleanse the aquatic environment well.

Although there is a clear species classification of these catfish, it will be difficult for a newcomer to decide on the choice of a future pet. Professionals recommend acquiring catfish varieties of Affinis. You can buy fish in any specialized store. 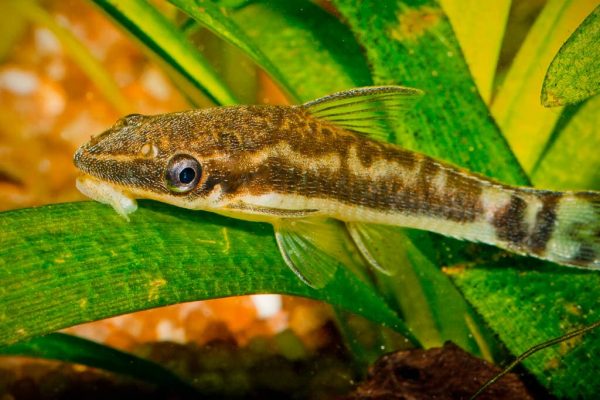 When the necessary conditions are created, catfish will feel safe and comfortable in your aquarium.

Some people think that Otocinclus are able to maintain the purity of the entire aquatic environment on their own, but this is not so. Water should be changed every 1-2 weeks. Only one-third of the total volume can be updated.

Otocinclus Catfish are shy, but they are quite friendly to most other aquarium inhabitants. In the daytime, they hide among the thickets and behind stones, and in the evening they begin to actively clean their homes.

Usually, they are found in the depths of the tank, where they easily find and eat the formed fouling. When catfish feel danger, they swiftly float away to shelters.

You should avoid keeping them with large cichlids like flowerhorn fish, green terror, or oscar fish.

Otocinclus Catfish constantly collects food for themselves with the help of their oral sucker. In the aquarium, cleaners feed on microalgae and zooplankton, so cleaning the tank should not be done with chemicals that kill small organisms.

Since there is not enough necessary food for catfish in a container with renewed water, additional feeding is necessary for them.

Fish can be fed with vegetable slices and bread. Especially catfish love cucumbers, zucchini, and spinach.

The products need to be soaked in clean water and only then immersed in the aquarium. Food that remains undernourished should be removed after 1-2 days so that it does not pollute the aquatic environment.

Otocinclus Catfish will eat dry vegetable feed with pleasure. Protein-rich foods are given to fish during the spawning season.

Reproduction and Care of Fry

For breeding Otocinclus Catfish, it is necessary to create suitable conditions. The aquarist will have to acquire a spawn tank and the volume of it should be at least 30 liters.

The tank should be supplemented with dense thickets and moss. Experts advise giving preference to Anubias, cryptocoryne, and echinodorus.

For a successful spawning, it is better to use a large flock of catfish, but three males with two females are quite enough. The courtship period includes peculiar mating games and skirmishes between males.

Spawning usually occurs in the morning. After choosing a partner, the female presses her head against his abdomen, stimulating the production of milk.

Then she throws the fertilized eggs on a cleaned secluded place, which can be a stone or sheet. In one clutch, there are from 120 to 140 eggs, which ripen within 3-7 days.

Eggs ripen at a temperature of +27 ° C to +28 ° C. The volume of water in the spawning should not exceed 20 cm. The first fry hatch already 3-4 days after the female has laid eggs.

The diet of fry includes microworms, spirulina, egg yolks. If mass breeding is planned, then matured individuals should be given Gammarus and bloodworms. Protein products stimulate fish to reproduce. Otocinclus Catfish can breed at the age of 7-8 months.