Opaline Gourami (Trichopodus trichopterus) belongs to the labyrinth family. Opaline gourami is a Peaceful, calm, and interesting fish with original colors that are popular not only among beginners but also among aquarists with experience.

They live calmly in a typical aquarium with similar species of fish, are easy to maintain and breed, live long enough, and look great in any home aquarium. Opaline Gourami is not found in nature. This is an artificially bred Gourami, a result of crossing spotted and blue gourami.

The appearance of the opaline gourami fish: The sex of the male and female Opaline Gourami is determined by the size (the females are smaller, with a more rounded body) and the shape of the dorsal fin.

In the male, it is long, pointed, reaches the base of the tail; in the female, it is short and round.

All types of gourami are slow and non-conflict. Good Tank Mates for Opaline Gourami are:

Often there are intra-specific skirmishes between males, always ending safely. Therefore, it is recommended to keep a pair of gourami or one male and two females in one aquarium.

If there are more males, the aquarium should be densely be planted with plants so that the weaker ones have a place to hide.

Therefore, experienced aquarists recommend getting them If you are planning to set up your first aquarium.

Size of the Aquarium For Gouramis

For a flock of 5-7 young individuals, a capacity of 50 liters is sufficient. For an adult couple, the aquarium should be at least 80 liters. Gourami can jump out of the aquarium during games, so it is recommended to close it with a lid or glass that is not tight enough to allow the fish to breathe atmospheric air.

The distance between the lens and the surface of the water should be at least 8-10 cm so that the temperature of the air and water is the same so that the fish could not swallow cold air and get sick.

Water should be within the following limits :

Aeration and filtration – It is desirable to set the internal aquarium filter to the minimum mode because these fish prefer stagnant water. For the easy maintenance of Opaline Gourami, aeration is optional, and it is enough to do a weekly water change of 20% of the volume of the aquarium.

Lighting – During the day, the fish lack the natural sunlight; in the evening, the aquarium is illuminated using fluorescent or LED lamp located above the aquarium.

Priming – For the fish to stand out clearly against the background of the aquarium, it is recommended to fill it with the soil of dark tones.

Coarse river sand or beautiful pebbles are suitable, and granite chips can also be used.

Plants – are planted in the background, and on the sides of the pond, the center is left free. Fish should have a place to swim. You can plant hornwort, Elodea, cryptocoryne, Wallisneria, echinoderms, fern.

Be sure to have floating plants – duckweed, Richie, pistia, or Salvinia, which will be convenient for males to build nests.

The aquarist needs to control floating plants in the aquarium so that the fish can calmly swim and swallow air. They cannot breathe oxygen which is dissolved in water.

Fish become sexually mature at the age of 8 to 12 months. The spawning procedure is simple, but the couple will need a separate spawning with a volume of at least 30 liters, densely planted with plants, with a water temperature of 27 degrees.

It should be filled to a height of not more than 15 cm.

It is recommended to cover the aquarium so as not to interfere with the fish spawning. Hiccups in the general aquarium are undesirable, other inhabitants or dad himself can eat caviar and fry if he considers that his offspring are in danger.

Therefore, for normal reproduction by Opaline Gourami, they are provided with separate content.

To induce spawners, they are seated and plentifully fed with live food – bloodworms or corvettes.

The female’s readiness for spawning is determined by the dark from the eggs, rounded abdomen. The couple is immediately transplanted into a pre-prepared spawning ground.

Papa gourami begins the construction of a nest of foam. Fry will develop in the bubbles of the foam, which dad will follow in the future.

When the development of the nest is over, the mating season will begin. The color of the male will become bright; he will look after the female, forcing her to the beginning of spawning.

When the female is ready, she will swim to the nest and will be located strictly under it.

The male gently hugs her with his body, helping to spawn eggs, fertilizes them immediately, then gently collects them with his mouth and places him in the nest.

At one time, the female spawns up to 800 eggs, most of which die.

As soon as the fry emerges from the nest, the dad gourami should be removed so that he does not harm them when he tries to return them. 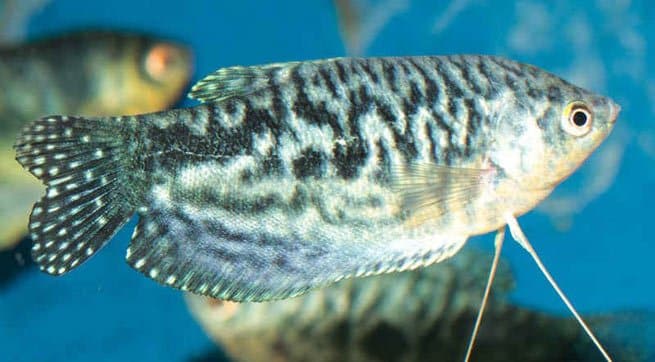 Fry is fed with micro worms and infusoria, as they grow, they are transferred to nematodes and artemia nauplii. It is firmly not recommended to feed with dry food; this leads to the mass death of the offspring.

During this period, aeration is essential, since the labyrinth in the babies has not yet developed, and they can suffocate.

As the fry grow, they are sorted by size and planted; larger ones can eat their smaller and weaker counterparts.

Gourami is omnivorous and can eat any food, the choice of which an important criterion is the size of its particles. The mouth of the fish is small, and they are not able to swallow large particles.

They also are given cucumber slices pre-scalded with boiling water (they are pricked on a fork and pressed to the bottom of the aquarium so that they do not float), lettuce, or dandelion leaves, breadcrumbs and oatmeal (you do not need to pour them over with boiling water). 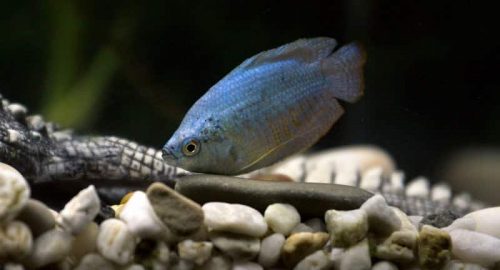 They do not disdain gourami with hydra planaria, can feast on snails, and hunt mosquitoes.

They look out for prey, then forcefully release a stream of water into it and quickly eat an insect that has fallen into the water.

Once a week, You should arrange a fasting day for your gourami because gouramis always overeat. They can calmly starve for up to two weeks If the owner is out on vacation.

Gourami is resistant to various diseases, but they can be their carriers and infect other inhabitants of the home reservoir. Therefore, newly acquired fish should be quarantined.

For the pets to be healthy and active, it is enough to provide them with good nutrition and proper care.