Midas Cichlid (Amphilophus citrinellus) is a bright, bold, and beautiful fish. It looks very attractive and wonderful in the tank. As every species of cichlid is somewhat aggressive, so is Midas Cichlid.

They do not hesitate to prey upon any smaller fish nearby. They are mostly found in lakes of Nicaragua and Costa Rica.

As Lake Nicaragua is the only freshwater lake with a large population of bull sharks, here comes the justification of the aggressive nature of Midas Cichlids. They have learned it from their neighbors. 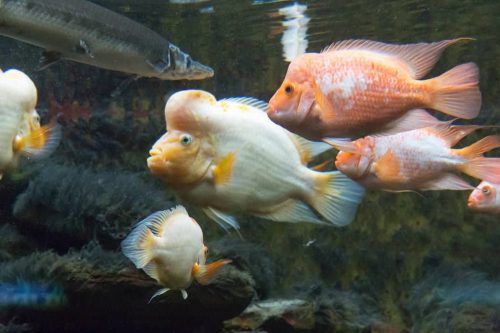 Midas Cichlid was described and found by Gunther in 1864. As they are found in Central America near the Atlantic Slope and are most common in the lakes of Costa Rica and Nicaragua, the waters are calm and slow there.

They usually like to live around an area with tree roots and rocky outcroppings. They easily find their food and the major targets are aufwuchs, small fish, snails, worms, and other any creature found in the bottom body of water.

The humps of males are more prominent and bigger in size than females. They can reach up to a length of 14 inches and have a life span of 10 to 12 years. If cared properly, they can live up to 15 years.

In the wild, they have dark brown, grey to the blackish body. There are six dark bars and a big black blotch on their body as well.

However, when kept in the aquarium, they tend to lose their natural body pattern and the majority become solid colored.

Different color morphs are seen upon their breeding. The most common are creamy yellow, all orange, all white, white, and orange or white with some colored spots (piebald). 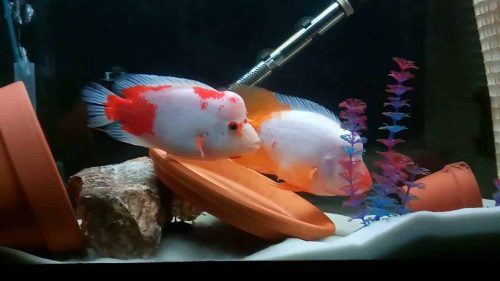 As all cichlids have a pharyngeal set of teeth in their throats along with regular teeth, the same is the case with Midas Cichlid.

Interestingly, Cichlids have a single nostril on each side whereas all the other fish have two. They suck in water to smell it and then expel it once they have sensed it properly.

As Midas Cichlids are large and aggressive fish, they are recommended to be kept by aquarists who have at least an intermediate level of experience.

For a pair, a tank of at least 125 gallons is needed. If you have other fish in the aquarium as well, its size should be at least 200 gallons and more.

This is because a Midas Cichlid would kill its tank mates if they enter its territory. The territory acquired by Midas Cichlid in the wild is around 4′ in diameter, which means at least a 4′ long tank is a must need.

No matter which fish you keep, tank maintenance is a must thing. In the case of Midas cichlids, they are moderately easy to keep if proper tank conditions are met.

Once you get a tank of enough size, the next step is proper maintenance.

At least 25 to 30% of the water is required to change weekly so, it would be good if you change the tank water twice a week.

This will also maintain the hardness level of water (10-12 dGH) and help keep nitrates and phosphates from building up in the tank. 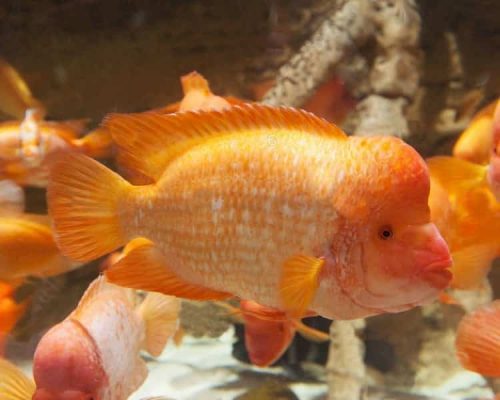 The pH of the water should be between 6.6 and 7.3. The lighting in the tank has to be moderate and not very bright. The temperature needs to be maintained between 22.2 and 27.8 Celsius.

Midas Cichlids are fine and happy with slow and moderate waters, the water in your tank does not need to be rushing.

Take care of the oxygen level as it is important for their body color and health. If you have some inlets in the tank, make sure to cover them as large and aggressive Midas Cichlids would love to break them.

The bottom of the tank needs to be sandy and filled with rocky objects which are tightly fixed. As they are avid diggers, plants won’t work well.

They will nibble and shred them. In the center, an open area is required so they can swim with ease.

As for the lid of the tank, make sure it is tight and secure so they do not jump out of the tank.

Carotene enhanced supplements and spirulina based foods should also be given from time to time. Vitamins and supplements help with good health.

Also, add vegetable food such as lettuce, spinach, peas, and blanched cucumber to their food.

It is advised to feed them little portions several times (2 – 5 times) a day than to feed bulk at a single time. This also keeps the water clean and fresh.

Moreover, poultry and beef hearts can be added to the diet but keep them rare. Once or twice a month is fine. As they are rich in proteins and fats, Midas cichlid can get digestive blockages if fed very often.

As Midas Cichlid is aggressive fish, they will show predatory behavior even in a large tank of 200 gallons.

Therefore, it is advised to keep them with fish of the same species or cichlids of different species. If kept with smaller fish, they can wipe out your entire tank.

So, they are a big threat to peaceful, slow swimmers, shrimps, crabs, snails, semi-aggressive fish, and plants. In the case of other large semi-aggressive and predatory fish, the tank should be monitored as there can be a fight anytime.

Midas Cichlids are quite easy to breed. Males are larger with big nuchal hump whereas females are smaller with a less prominent hump. When they are 7 inches in size, they are ready to breed.

They might take weeks to get acquainted. During this, they frequently stroke their nuchal hump over the partner’s lateral line. They breed in the flat surfaces such as rocks and caves placed in the aquarium.

During breeding, the nuchal hump grows more in size. A female is capable of laying 1000 eggs at a time so, her belly increases in size. Both males and females are very defensive of their nesting area.

The eggs hatch within two to three days. Fry are grey in color and stay in a group. As they mature, they develop a different color. They are capable to eat live food in a week. If there are some unfertilized eggs, they are eaten by the parents.

There are several diseases that Midas cichlids can get due to poor quality water, higher levels of copper, and nutritional deficiencies. The most common are:

Ich is the skin infection caused due to the increased number of protozoans and water molds. This requires elevating the water temperature and proper copper-based medication.

Hole in the Head is another common disease that occurs due to poor water conditions, lack of vitamins, poor diet, or activated carbon in the water. It can be cured by using driftwood as it maintains the pH level.

However, if you take care of the tank requirements and maintenance, you can save your fish from any kind of disease.

So, Midas Cichlids are good to keep in your aquarium if you are really enthusiastic about them. They can be easily bought from fish stores at affordable prices.

Once you have learned how to take good care of them, they will be great fish in the aquarium. Breed and multiply them to have a lot of Midas Cichlids.