Mayan Cichlid (Cichlasoma urophthalmus) also is known as the Mexican mojarra belongs to the Central American cichlid family. It is found natively in Central America, from east Mexico’s Río Coatzacoalcos basin southward to Nicaragua, Isla Mujeres, and the Yucatán Peninsula.

Its primary color is brown with varying hues of red. There are five to seven broken vertical green lines on every Mayan cichlid’s side along with a small circle-like comparatively darker-colored area near its fin.

Like most other species, wild Mayan cichlids have more red pigmentation in terms of quantity and intensity. Sometimes, these fish have spots of bright red on areas like the chin and breast.

One of its distinguishing features from other similar fish of the same genus is the one nostril opening on each side. 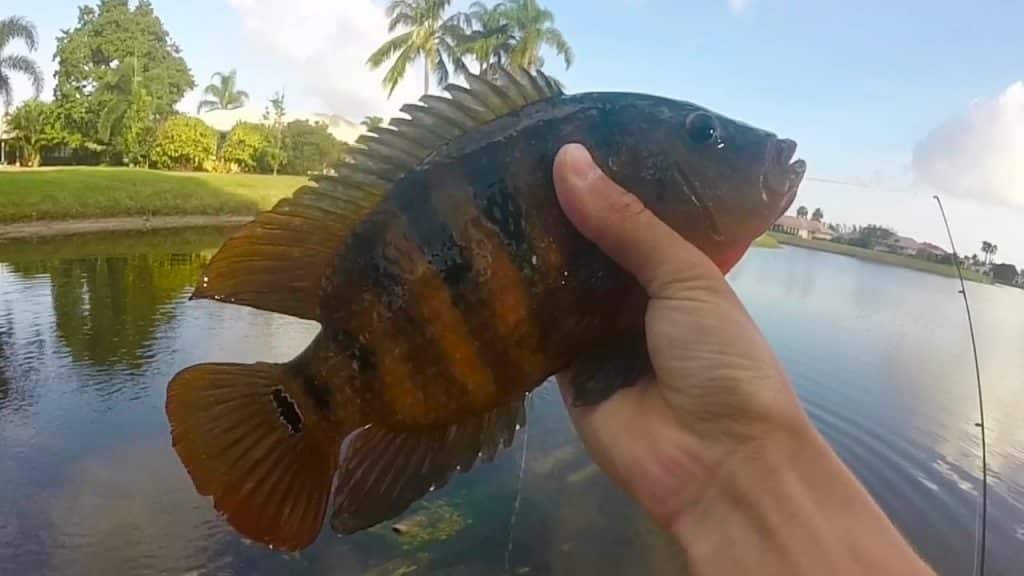 The dorsal fin (the fin on its backbone) is both soft and hard, allowing it to swiftly navigate the Caribbean Sea.

This dexterity is partially the reason for its resilient reputation among fishermen. It has a round caudal fin (the fin at the end of a fish), which helps it increase its speed.

The Mayan cichlid fish is found in a range of water bodies, i.e., lakes, rivers, ponds, marshes, saltwater lagoons, and other coastal areas.

Thus, it is a species which can survive in both fresh and saltwater, despite its preference for freshwater bodies.

The Mayan cichlid’s optimal preference is for areas abundant in oxygen or at least with a dissolved oxygen content of at least 3.5 mg/L. Thus, it prefers cold water too. It can tolerate up to 40 ppt of salinity.

Due to its adaptable tendencies, it can survive with extremely low oxygen as well, i.e., hypoxia or even anoxia, for around two hours. The Mayan cichlid fish adopts a sedentary lifestyle in such circumstances.

The Mayan cichlid fish has other predatory resilient features that ensure its adaptability. Its jaw has a 6.8 percent protrusion, which allows it to not only be more adept at hunting but also successfully hunt 20 percent of evasive prey.

Combined with the dorsal fin’s agility, this allows the Mayan cichlid to secure food in almost every habitat. It can also digest a broad range of species, from vegetative matter to grass shrimp and snails. During the dry season, fish are their primary prey.

They would prefer algae, snails, slugs, decapod crustaceans (like crayfish, lobsters, prawns, and crabs) and insects, while the pre-adult Mayan cichlid consumes seed shrimps and the organic decomposed waste of organisms inhabiting the water body.

The Mayan cichlid might, however, suffer from malnourishment if it does not consume enough animal prey.

This species is philopatric, i.e., it’s a non-migratory species that prefers constant inhabitation of its current water body. Thus, the location of shoals of the Mayan cichlid fish can be safely predicted and accounted for.

Both the male and female Mayan cichlids are involved in taking care of the eggs and rearing the children. The Mayan cichlid fish is also monogamous. The eggs are adhesive and, thus, stick easily to any protective place they are stored in.

The Mayan cichlid is very protective, territorial and hostile during breeding and protects its fry for six weeks after they are born.

As soon as the little Mayan cichlids are born, they travel to the bottom of the water body. They are adept at mastering the flow of the current. Even though breeding usually occurs in freshwater, it can also occur in saltwater marines or mixed water estuaries. Mayan cichlids have even been recorded breeding in the spongy roots of mangroves.

They need a small to average space for nesting since their nests span from 10 to 45 centimeters in diameter and are generally 10 cm deep.

The breeding season is usually from April to June. They breed several times in a year, and the newborn fish are around 5-19 mm in diameter. The females and males of this species do not differ much in size, starting from the very moment of their birth.

Mayan Cichlid as a Non-Native Species

As a non-native species, the Mayan cichlid was first documented in the Floridian Everglades National Park in the early 1980s, and ever since then, it has spread across the Floridian east and west coast enough to become an established species of that region.

It is primarily used in aqua farming. The Mayan cichlid is cared for in these habitats for two primary purposes:

They can be baited by a wide range of shrimps, worms, and snails, so it’s easier to fish for them. Furthermore, they are a greater challenge because of their dexterous swimming and persistent strength when hooked onto the end of the fishing line. Thus, they are more of a catch for fishermen.

They also exist in greater numbers since the Mayan cichlid fish can breed in a varying range of freshwater and saltwater bodies.

The major reason for its computability as a non-native species in Florida is its minimal disruption of the native ecological systems.

Even after the Mayan cichlid fish have consumed their fill, there is enough animal prey left over for the other species. The hunted species also aren’t consumed to the extent that they become endangered.

After thirty years of inhabiting Florida, the Mayan cichlid fish has proven to be persistent, surviving in droughts, famines, severe cold, and floods. It is safe to say that the Mayan cichlid has adapted fully to the Floridian native habitat.

Mayan Cichlid Fish in an Aquarium

The minimum size of a Mayan cichlid fish’s aquarium should be 208.2 liters, and it can go as far as 560 liters. Since the species is large, it can only healthily function in large aquariums.

It is also suitable for its aggressive personality type.

Unless these fish are being quarantined because of the risk of them being infected, they shouldn’t be kept in an isolated tank or aquarium. They need to interact with other members of the same or different species. 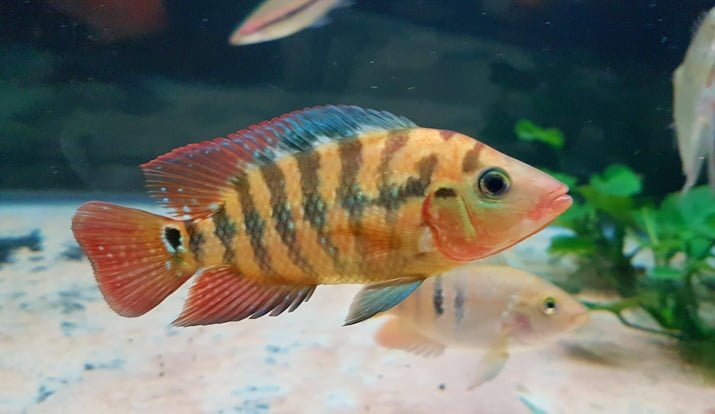 The Mayan cichlid inhabits the middle and lower levels of the water column. It uses the middle level to interact with the other fish and behave as a social animal.

It can also use this level to hunt but is capable of utilizing the lower level and digging into the substrate for hunting when fresh animal prey isn’t readily available.

The other species inhabiting the tank need to be of a similar size with similar eating and breeding habits so that there isn’t a clash to aggravate the Mayan cichlid species.

These species aren’t extremely closely related to the Mayan cichlid fish and, thus, won’t be perceived as a threat.

The Mayan cichlid fish should be given one large meal every day or two to three small meals. The meal the next day can be skipped if an especially large portion has been given to the fish the day before.

Due to the Mayan cichlid’s native eating habits, it would prefer small meals over large ones.

A breeding pair of Mayan cichlids should be kept separated from the other species since they tend to become very aggressive. The other fish will get injured, especially if they are small.

They tend to lash out in their aggressiveness and injure non-prey species too. The only way other fish can be allowed in the same tank is through smaller fish that function as target fish.

A mesh can also separate the Mayan cichlids from the other species, but it’s not recommended since the fry will travel to the other side and would be inaccessible to the increasingly aggressive and protective Mayan cichlid parents.

Mayan cichlids are a resilient species habitable in a lot of different water bodies and have established themselves in Middle America.