Leaf fish (Monocirrhus polyacanthus) also known as The Amazon leaffish or South American leaf fish is a freshwater ray-finned fish from the Nandidae family. It is the only representative of its kind.

This typical predator lives in the Amazon, and its most interesting feature is its amazing adaptation to catching prey.

The shape of the body and color of the fish resembles a dry leaf of a tree, floating with the flow.

In the process of evolution, predators and their prey are constantly struggling with adaptations. Leaf fish is one of the most striking examples of the use of “mimicry” (imitation of inanimate objects) in wildlife.

This allows her to effectively hunt from ambush and hide from enemies.

Leaf fish are not often found in home aquariums due to the difficulties of keeping and feeding, but they are one of the most unusual and interesting fish in behavior.

To enhance the effect, the fish slowly drifts upside down, moving with the help of transparent fins.

As soon as a small fish loses its vigilance and approaches such a “leaf”, the predator opens its unusually wide mouth and sucks in its prey.

Eating exclusively live food, special conditions of keeping, and quarrelsomeness with other species led to the rare distribution of this species in aquaristics.

However, if you are not afraid of such difficulties, and there is an opportunity to create a suitable biotope aquarium, then you can purchase one of the most unusual pets with interesting forms of behavior.

The leaf fish has a strongly flattened body. The head is pointed, on the lower jaw, there is a small worm-like process, which makes the fish even more like a dead leaf of a tree.

The leaf fish grows up to 8 cm long. The color may differ depending on the habitat. If the fish prefers places with a lot of aquatic plants, then its color is usually yellow-green. In open water, the color may change to brown. Often the body color is not solid but in the form of alternating dark and light stripes. Dark lines radiate from the eye in a circle.

Thus, the external structure of leaf fish fully corresponds to its creed as an ambush predator.

Such camouflage not only helps to effectively hunt but sometimes also saves the fish from larger predators.

Leaf fish are native to the river systems of South America, which are part of the Amazon basin. It can be found in Brazil, Peru, Venezuela, Colombia, and Bolivia.

Rivers in this part of the world are saturated with humic substances, often have a dark color.

A large number of fallen leaves and snags are found at the bottom. It is among them that leaf fish hides, watching for the next prey.

For one leaf fish, an aquarium with a volume of 70 liters or more will be optimal. Most often it has to be designed as a biotope.

Sand or small pebbles are used as a substrate, preferably a dark color so that the fish look more contrasting.

The main decorations are natural driftwood, stones, as well as specially processed tree leaves (for example, Indian almonds), which are placed on the bottom. 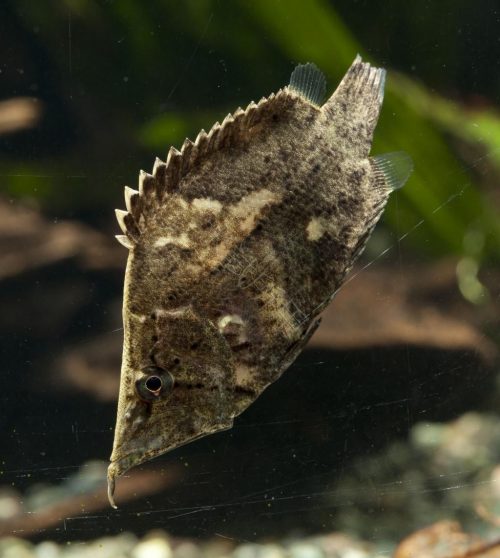 For plants, it is recommended to use broadleaf species, for example, large echinodorus.

Fish does not like bright light, and these plants, in addition to species floating on the surface, allow you to create a natural twilight.

Besides, the leaves of the Echinodorus are often a favorite place for laying eggs.

The aquarium must be provided with high-quality filtration (but without a strong current) and aeration.

Particular attention should be paid to the correct water parameters. Like many inhabitants of the Amazon and its tributaries, leaffish prefer warm, soft and acidic water.

It is useful to add the Tetra ToruMin conditioner to it. It contains natural peat extract and will create a “black” tropical water in the aquarium, in which the fish will be as comfortable as possible.

In this case, usually, one individual or a male-female pair can be settled.

Cohabitation with small and even medium-sized fish species is not recommended.

The predatory instincts of leaffish are unusually strong, so sooner or later everything that can be eaten will be eaten.

Too large neighbors can become a threat to leaf fish because it is unlikely to be able to stand up for themselves in battle. 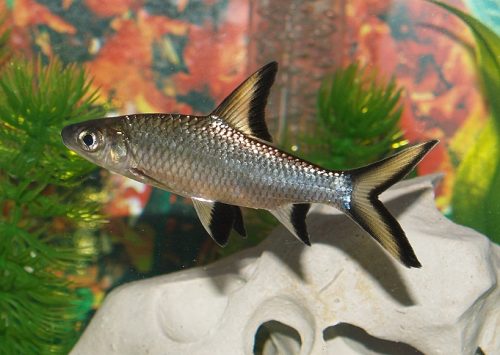 Do not keep cichlids with leaf fish as both are predator fish and they may start doing some wars!

According to studies, the basis of the diet of leaf fish in nature is made up of small fish species, mainly from the families Characinaceae and Lebiasinaceae.

Surprisingly, the fish can swallow even rather large prey thanks to their widely stretched mouth.

Leaf fish do not differ in gluttony, the usual daily rate is 2-3 fish.

Unfortunately, this species does not accept dry food at all. Juveniles can be fed with large bloodworms or pieces of shrimp, but adults prefer only live prey.

For this, it becomes necessary to keep “weedy” fish that multiply rapidly, for example, guppies.

Breeding leaf fish at home is possible, but this will require several efforts. First of all, you need a couple who is ready to breed.

Fish become sexually mature at the age of about one and a half years. There is no pronounced sexual dimorphism.

Females appear larger during the spawning period, and they have a well-defined ovipositor.

Spawning takes place directly in a species aquarium or a special spawning tank, the volume of which must be at least 100 liters. 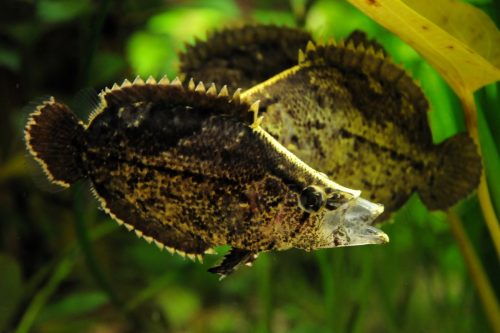 It is very important to have flat surfaces – stones, driftwood, and broad-leaved plants.

The stimulus for spawning is to maintain the temperature at a level of at least 25 ° C and gradually decrease the hardness to 2-4 dH with the help of frequent small water changes.

The producers themselves are abundantly fed.

Once the fish is ready for spawning, then soon it will be possible to observe a mating dance near the surface of the water, after which the female lays up to 300 eggs on the substrate.

After fertilization by a male, the female should be removed, because the burden of care is completely taken over by the newly-made father.

It provides the eggs with water flow, fanning them with their fins, removes dead eggs.

The incubation of eggs takes 3-5 days, after which the larvae feed on their yolk sacs for another three days.

Then the male should be planted, and all that remains is to feed the juveniles. This is usually the most difficult task, as the fry require live food and are very sensitive to water quality.

Also, regular sorting is necessary, because the grown fry are not at all averse to swallowing their smaller brothers and sisters.