Keyhole Cichlid (Cleithracara maronii) is from South America found in the lower Orinoco Basin in Venezuela and the river basins in The Guianas. Keyhole Cichlid is the only one species in the genus Cleithracara.

They usually come from quiet waters in slow-moving ponds or rivers. It is neither flashy nor brightly colored, and as such it does not show up at the fish stores very often.

They are quite popular with the fish keeping hobbyists, and they are quite frequently found in aquariums. They are one of the most peaceful cichlids, being reclusive and shy and make a great addition to the water tank. 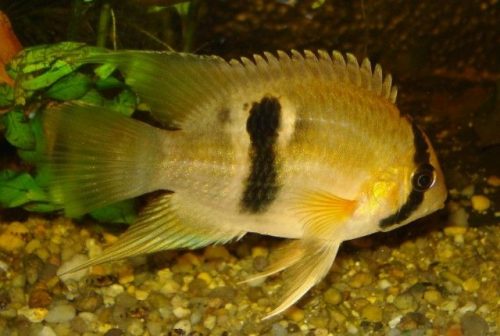 When you do decide to get a keyhole cichlid for your home tank, make sure you get from a reliable source. If you get from a contaminated source, then your entire aquarium can become infected. As such, only purchase those which are kept in a healthy environment.

There is also a black, wide stripe that runs from the top of their body in front of their dorsal fin and down towards their eye and ends up at the bottom of their gill plate. They also have another black spot, and often there is yellow on the side which starts from below the middle of the dorsal fin and then extends down in the mature fish. It is usually in the shape of this spot which gives this fish its common name of ‘keyhole cichlid’.

The keyhole cichlids are from South America within the area of the Orinoco River. They can be found from the Barima River (Guyana) towards the Ouanary River (French Guiana).

These are one of the only fish species from the Cleithracara family. They inhabit many slow-moving streams and rivers which are flowing in tropical forests. 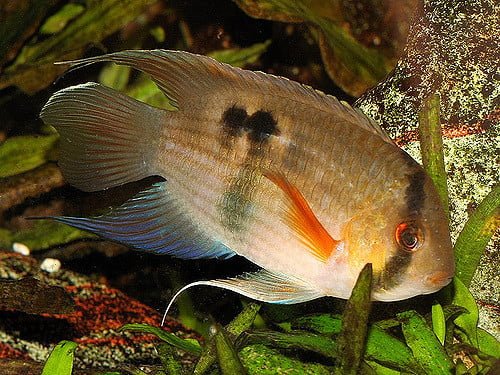 The bottom of these rivers is usually covered with branches, fallen leaves, and various fruits from the trees. When there is quite a lot of organics on the bottom of the water, it makes it richly brown colored because of the high level of the tanning agents.

This is the reason why they have been named as ‘keyhole’ cichlid from which their genus name Cleithracara originates from. Cleithracara means “lock acara.”

When this species is nervous or startled, it gets a blotchy sort of coloration, and it presses its body against logs or rocks, trying to camouflage itself. It is generally quite non-aggressive, shy, and peaceful. As such, it should not be kept with other aggressive fish species. Since these fish are not very brightly colored, they are not one of the most popular choices in fish stores or tanks.

These fish are hardly ever seen on sale most keyhole cichlids are seen for sale are grown in private fish farms or at the fish hatcheries.

When it comes to determining the gender of the fish, it is almost impossible to tell the genders apart, especially in the juveniles and in the young species.

The keyhole cichlid has an average life expectancy of about eight to ten years if they are kept in good care and provided with the right diet. The keyhole cichlids usually feed on crustaceans, worms, insects, and larvae.

While it is in the water tank, it can be fed live, dry, or frozen food. It is generally not fussy in the aquarium and will accept the majority of the prepared foods which is a varied diet containing bloodworms, daphnia, artemia, and more. 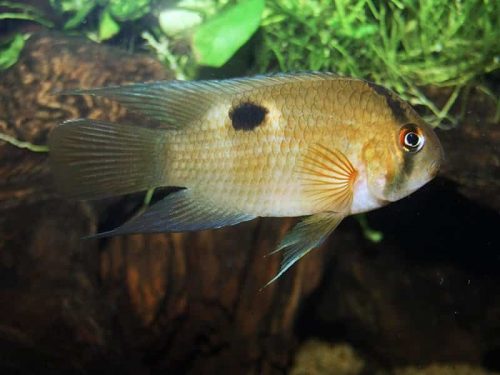 It even eats beetles which can be dropped down in the water tank. This diet should be offered to the fish to keep them healthy and in an optimal condition.

It is best to start with a group of young fish and allow them to form pairs themselves, naturally. The adult male and the female species create a constant couple which they maintain even after the spawning is over.

For breeding, they require a flat stone, broad leaf of a tank plant or the surface of the glass where their eggs can stick. Up to 300 or more eggs can be deposited at one time.

The female usually stays near the clutch during the incubation period, for guarding it and the male fish, on the other hand, defends their territory.

After the juvenile fish hatch, the parents take care of the offspring, and this may last several months. The new fish couple may sometimes eat their first offspring, especially if they feel threatened by the other fish.

If the water tank is overcrowded, then the offspring can die even when both the parents are guarding it. As such, it is advisable to put the fish into another tank for spawning.

The recommended volume for the tank is about 80 liters for a couple. These fish are monogamic, and they form couples.

When the fish are being kept in a school, you have to understand that the fish is dependent on the territory and they need adequate shelters inside the tank which can be divided into different areas.

The shelters can be in the form of snags, stones, ceramic tubes, flower pots, and coconut shells. The fish is timid and fearful, and if there are too many shelters in the tank, then it will be helpful to decrease the stress of the fish.

Since the fish does not dig the substrate in the fish tank, it means it can be easily kept in most amateur planted fish tanks as well. 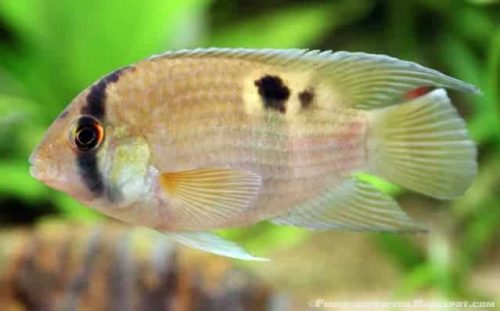 The best container for this fish would be one that can stimulate its natural habitat. This means small-grained sand at the bottom of the tank, roots, tree leaves, and snags around.

A few flat stones should also be available for spawning. When it comes to the tank water, it has high requirements for composition and water quality.

Since the fish originates from tropical areas, the temperature of the water should be within the required limits. 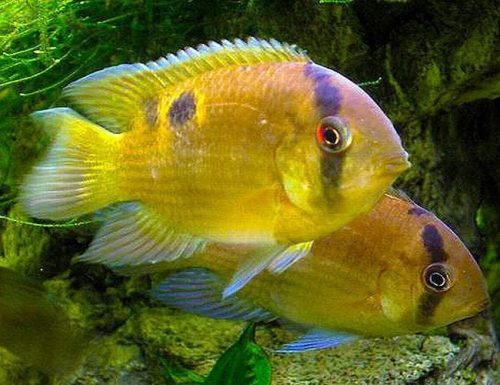 However, the powerful filters sometimes create an excessive flow of water, which is disliked by the fish which prefers to live in slow water.

The canopy and the lighting of your water tank must ensure that your fish do not jump out of the water and there are no contaminants that can enter your aquarium.

As such, you must have a canopy that can completely cover your entire aquarium. The amount of lighting which is required in the tank, however, should be able to mimic the sunlight they would receive in their natural habitat. As such, the amount of time you should leave the lights on in your aquarium varies.

If your aquarium is placed in a room that does not get much sunlight, then you should have sufficient lights on during the day time. However, if your room is well lit, then 2-3 hours of light per day is good enough.

Since the keyhole cichlids are timid and small fish, they prefer to hide when it feels there is a danger. It is advisable to keep it in a school of six to eight species without any aggressive or large tank mates.

The water tank, however, should have enough room for shelters. It would be the ideal situation to keep them in a bio tape along with the other fish species which dwells together with it in the wild. 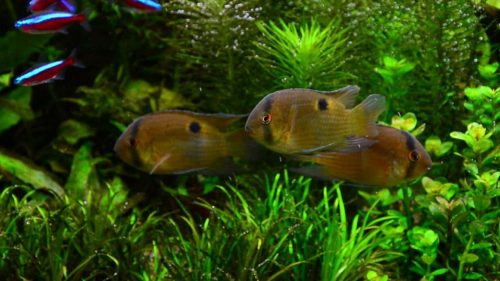 Keyhole cichlids do not generally show aggression towards their tank mates if they are at least a few centimeters long. The only time it does become aggressive is during the process of spawning and while it is protecting its offspring. The maximum level of aggression that this fish show is while warding off other fish from its territory.

Golden Wonder Killifish is also known as Malabar Killifish or Aplocheilus lineatus. It has an elongated body and shiny emerald...