Jewel Cichlid (Hemichromis Bimaculatus) belongs to a group of brightly colored fish from Africa. Jewel Cichlid Fish are however difficult to keep in a home tank because of their aggression.

These are known to be the most colorful fish from the freshwater and the Jewel Cichlid is the crown jewel of cichlids.

They are named ‘Jewel Cichlid’ due to their bright coloration and sparkling appearance. These make a great addition to the Cichlid tank, but they may be a little tricky to care for sometimes.

Jewel Cichlid is a native of Africa and the species range from around 3 inches to about 12 inches in their length. These fish are usually smaller in size for the home tanks than they are in the wild.

These fish are known for their bright colors, which become more intense and prominent during their breeding.

These species may be a little difficult to care for, especially when they are in an aquarium or a community tank as some of these fish have aggressive tendencies.

These species may be quite territorial and as such, they need to be kept in a tank that is big enough so that they can easily establish their territory.

So if you decide to keep Jewel Cichlids in your home tank which is already established, make sure you do keep some plants and rocks to break up the lines of sight so that you can reduce their aggression.

You must also keep in mind that the Jewel Cichlids are quite avid fin nippers and more so when they are not fed properly.

As such, you must keep this in mind when you are choosing the tank mates for Jewel Cichlids; you surely do not want to keep them in the same tank as another species which have long and flowing fins!

These are open water spawners which means that they look for places where they can dig holes for spawning activities.

Once the male and the females have bonded and formed a partnership, they will kill the other species if they have a chance during their breeding and in the fry raising process.

A lover of the cichlid fish will get a lot of pleasure from watching these fish interact, especially when these species spend a lot of time caring for their young ones. 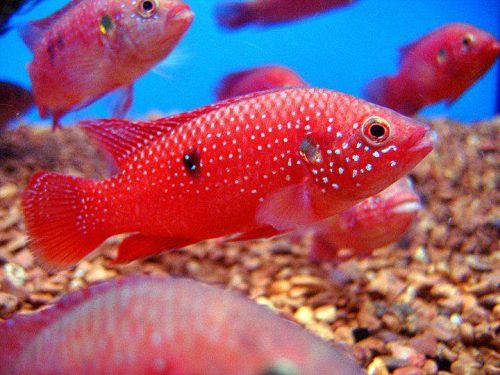 To tell the difference between the sexes of this species, look for the female which should be relatively plump and during the breeding conditions, the female would be the one which is full of roe (eggs).

The male fish, on the other hand, is more jeweled, as compared to the female, especially in the regions of the gill plates and in the flanks as well as in the tail fin.

It may not be very bright red however sometimes the female is brilliant enough that many may consider her mistakenly to be male.

But you must make sure that you do not keep them in a tank which is smaller than 40 gallons, with the breeding tank being the exception.

You should also mimic the living conditions of their native environment to keep these fish healthy.

Most of the Jewel Cichlids prefer to be kept between the pH levels of 6.5 to 7.5 and the temperature should range between 74°F and 80°F.

Apart from the water parameter requirements for the fish, you should also consider the decorations for the tank. 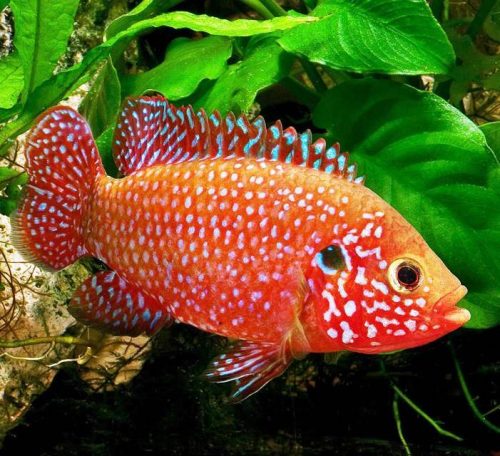 These fish do well in a tank that has a lot of caves as well as flat rocks which they claim as their territory.

Similar to many other species, these fish also tend to dig into the substrate which ends up disturbing the live plants.

However, there are certain types of plants such as the Amazon sword plants and the cryptocoryne plant species which do well in the tanks with Jewel Cichlids. Other plants may also be fine as long as you attach them with driftwood or protect their roots with stones.

Similar to the behavior of other Cichlids, the Jewel Cichlids will end up eating whatever you offer them.

However, to maximize the colors of the Jewel Cichlids, you should give them a diet that includes frozen or live, freeze-dried pellet foods.

You may start with a staple diet of pellets or cichlid flakes and then supplement it with different frozen or live foods. 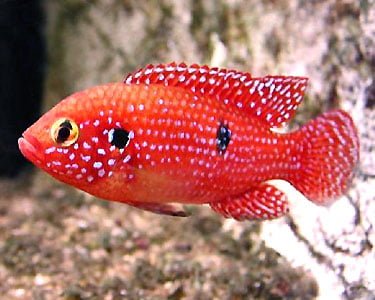 The Jewel Cichlids can also be fed with fresh vegetables sometimes. The diet which you do offer to the fish is very important as you want to condition them for breeding and in such a case, you should focus more on frozen and live foods.

Caring for these species is not very difficult as they are not very choosy about their food and other requirements.

They have however required a particular diet which they need such as live or frozen protein-rich foods during as well as in the process of spawning and the fry raising period.

Getting tank mates for jewel cichlids is a hard task and many people have found different results. Due to the very aggressive nature of this fish people hardly keep any fish with this one in their tank.

However, some people have kept this fish with Tiger barbs, Neon Tetra, Kribensis, peacock cichlid, and some other African cichlids but make sure you have a big tank for this.

One great aspect of these species is that they make great parents to their young. Generally, the male and the female both share the task of taking care of their young ones as soon as they hatch.

The fish spawn on usually a flat and large surface and the eggs take about two to four days to hatch.

As soon as the eggs are hatched, the parents may end up moving the fry to another safe location, till the time they are independent and free swimming.

As the fry has absorbed the leftover of their yolk sac, they need to be fed fine and thinly crushed flake food as well as mashed pellets.

You do not have to worry about the parents eating the young, but you do need to remove the other fish from the home aquarium just in case. 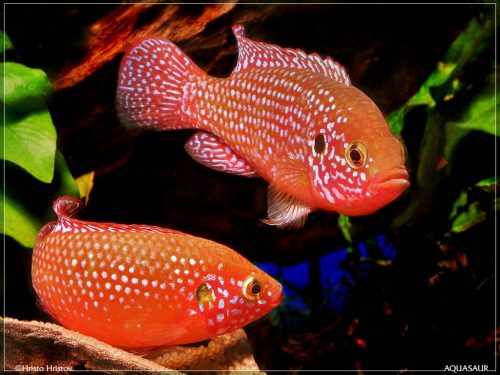 When it comes to the requirements of breeding, the Jewel Cichlids need to be bred along with a healthy and safe diet.

They are known to be monogamous breeders so you have to either raise a group of juveniles together or then raise them to pair it off in a natural way or purchase a breeding pair.

Once the Jewel Cichlid fish has been conditioned for breeding, then you may transfer them to another tank which is specifically for breeding and then increase the temperature of the tank by a certain degree or so to encourage spawning.

As we are aware of it already, the jewel cichlids are a genus of the popular cichlids which are native to the African region and as such there are around eleven different types of species that belong to this genus.

The different species of the jewel cichlid include the following:

Each of these species of jewel cichlid is quite different and unique while many of them are readily available than the others. The most recommended ones for the home aquarium are mentioned below.

African Jewelfish: These species of the Jewel Cichlid grows up to around six inches in length and it has blue spots and a red body.

They are native to West Africa and they need warm water and a bit acidic pH to thrive in the home tanks. These species may be a little aggressive and not a very good choice for a community tank.

Banded Jewelfish: These are also known as the five spot Cichlid and these are also from West Africa and usually found in the Nile Basin or the Zambezi River or the Lake Chad.

These species grow to a length of around 10 inches and has a green and yellow color with about five black patches on their sides.

Blood-red Jewel Cichlid: This one is the most popular and the most recognizable one of the species and they are known for their dark red colors with small rows of blue spots.

These grow to the length of 4 inches and breed very easily in the home tanks.