For instance, you might have noticed that young cichlids have noticeable black bands on their body whereas the cichlids that are mature differ from the young ones in appearance as they have spots, and they have been named as ‘jaguar cichlids’ because of these spots. 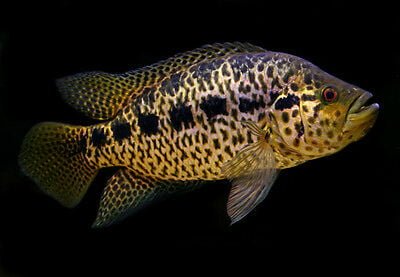 Jaguar cichlid has a lengthened, flat-sided, and somewhat oval body, which promptly shows that it is a raptorial feeder, and that is capable of a forceful assault.

Considering the length these cichlids are capable of growing to it can be said that this species is one of the biggest cichlid fish that you can keep in an amateurs’ tank.

Jaguar cichlids are different from the rest of the cichlid fish species in this way that they get most of their color at the time they become reproductive.

The size of the jaguar cichlid fish that live in the wild is around 60cm and it weighs several kilos.

However, this is not the case with the cichlids that are kept in tanks as they tend to grow around 40cm and hence are smaller in length.

The jaguar cichlids tend to have an aggressive nature and due to that reason, it has been advised to not keep them with other species of fish. It is better that you keep them away from smaller sized less aggressive fish.

Jaguar cichlid was first portrayed by Gunther back in 1867. Before this, the fish had several names – Cichlasomamanaguense and Nandopsismanaguense.

Jaguar cichlids mostly inhabit Central America. The name of the lake where the jaguar cichlid comes from is Nicaragua basins, also known as Managua Lake. 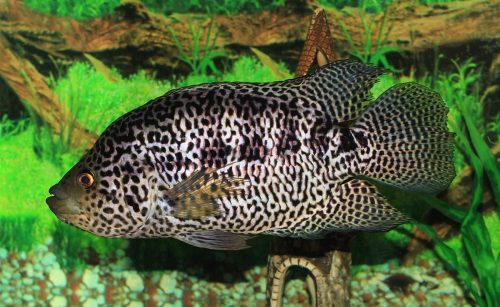 Presently the Jaguar cichlid can be found in the Lakes of Guatemala, Mexico, Singapore, Panama, Florida state (USA), Salvador since these were brought here by anglers.

This resulted in damage to the local neighborhood as well as to widely varied vegetation because of generally unsociable temper and as well as the intemperance of the fish.

The jaguar cichlids can be found in various waters from lakes with a lot of vegetation and light ground too quick waterways and tributaries.

But they are usually found in much larger quantities wherever there is warm water with a lower than normal composition of dissolved oxygen.

The average lifespan of the jaguar cichlid fish is fifteen years, but if it is kept with proper diet and care it can live longer as well.

The typical jaguar cichlid has an elongated body, it is a little flat from the sides has a silvery body on which dark-brown and black spots can be found.

The pattern of the spots varies according to the shape and the size of the fish. Also, it has pharyngeal teeth and sharp ‘beams’ on the fins that protect it against other wild fish.

Is it difficult to keep?

Generally, a jaguar cichlid is not a fish species that is difficult to keep. However, they do require a huge tank and powerful filters to survive. 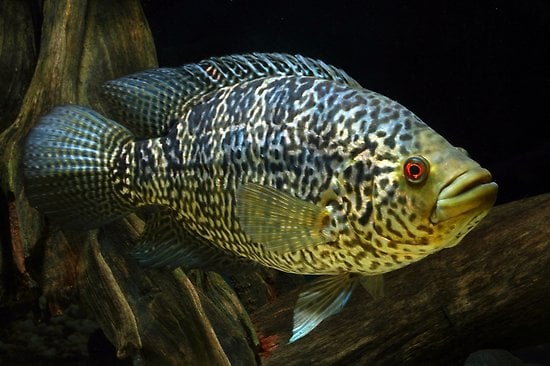 However, this fish is not recommended to be kept by people who have no experience with fish in the past, as jaguar cichlids can be very aggressive, large, and are raptorial feeders.

It can be troublesome for people with little, or no experience with fish to handle their requirements.

As mentioned above, jaguar cichlids are raptorial feeders, and hence, they tend to consume anything that moves, and that can fit into its mouth.

They can be fed small feeder fish as well. For one meal, a full-grown jaguar cichlid can consume up to 10 fully grown swordtails. 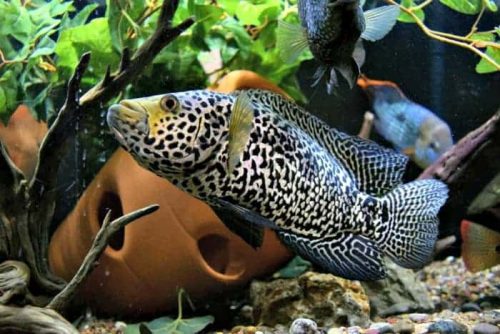 The fish should be given one meal in one day and it’s possible to make one day in seven days a hunger day.

The tank in which jaguar cichlids should be kept is supposed to be large. It should have a capacity of 100 gallons at the very minimum.

Jaguar cichlids tend to be very aggressive, however, their aggressiveness tends to be reduced if they are given their territory.

Big objects should be put at the very bottom of the tank, such as snags, rocks, and big grained gravel.

However, it is better that you do not put any plantation into the tank as the jaguar cichlid will destroy these quite quickly and aggressively. 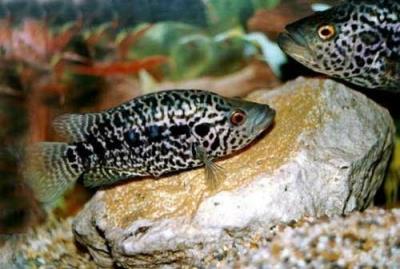 Just like every other cichlid fish, jaguar cichlids are bottom diggers as well, hence it can be usually found moving around the rocks at the bottom of the tank. Its size aids it quite much in this task.

To keep the tank clean, prevent the water from getting muddy and stop constant bottom surface changes the tank in which the jaguar cichlids live must be cleaned regularly.

For the situation, the best substrate for the base is a yet extensive grained rock with some little and fair measured grains, which can be effectively moved from one place to another. In the territories of their natural surroundings, the water temperature changes from 15 to 30 C.

According to a few authors, the fish can stand a short temperature decline up to 12 C. 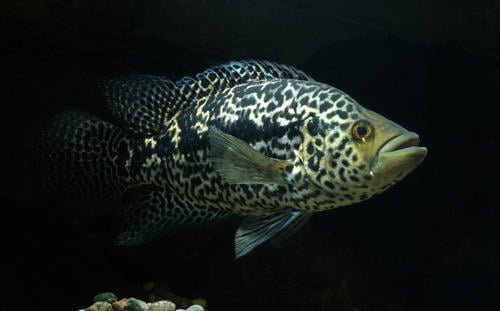 In any case, it is not encouraged to test this. The ideal water temperature for jaguar cichlid fish is around 24-26°C. pH ought to be kept around 7. The hardness of the water is supposed to be around 15-25°dH.

You might notice that the more the temperature of the water is, the more the cichlids tend to become aggressive.

Hence, it is recommended that you keep the water temperature at a lower limit 24oC to ensure that the fish does not get very aggressive.

Due to its nature of being a territory-dependent, aggressive and raptorial feeder it is better that you do not keep this fish in a community tank.

It becomes more aggressive during its spawning period.

If you want to keep them with other fish in a tank, then you can keep them with other large-sized cichlid fish from Central America such as convict cichlid, Oscar fish, green terror, and Jack Dempsey fish. They can also be kept with large catfish such as pacu, sailfin pleco, redtail catfish, giant gourami, and pleco fish.

You can either keep one fish in a single tank or a couple. Since they are so aggressive, they cannot be kept with their kind unless they have grown together since they were spawned.

If a jaguar cichlid is paired with a female jaguar cichlid that it is not familiar with, chances are that it will kill the female fish, especially if the male is larger.

Jaguar cichlids are capable of breeding in community tanks yet for everybody’s safety, it would be much better to keep them in an independent region (around 300 liters capacity tank) when they are in their breeding period.

Jaguar cichlids usually form a steady couple and they are splendid guardians. However, to make such a couple it’s required to raise together a few adolescents to give them a chance to pick their match themselves. 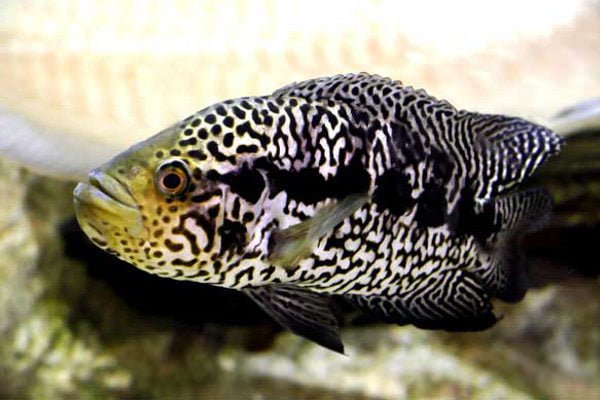 It is better than the temperature of the water is raised a little and kept at 28 degrees. However, if breeding has not been begun by the fish when it was expected, you can stimulate it by changing 25% of the tank’s water with fresh defecated water but at the same temperature

The development pattern of jaguar cichlids is cyclic. The young ones can grow up to 15cm in length in the first two months since their birth.

And afterward, they may require a year or eighteen months to achieve the normal length size of a fully grown jaguar cichlid.

Adolescents develop at a different speed; hence it is normal to see fish of various sizes among adolescents from the same spawning period.

In this way to avoid cannibalism among adolescents, they should be arranged by size every once in a while and put into different tanks as per their size.