Jack Dempsey Fish (Rocio octofasciata) belongs to the cichlid category of fish. It has stern facial expressions and a hostile nature, which is why it is named after the aggressive boxer Jack Dempsey.

The Jack Dempsey cichlids have stern facial expressions and a very strong facial bone structure. They are found in varying lengths but can be as long as 23 to 25 cm.

Their color is dark. While the young ones are light grey or blue, they change color to purple with bright blue or green flecks. They are also known to change color according to their emotional states. Despite having a bright color, they are not as bright as other species of cichlids. The female fish are likely to be smaller and less bright in color as compared to the male fish. The male species also have more bright spots, which are more spread on them.

The Jack Dempsey fish is spread across a wide range of areas, roughly from the North to Central America. It is native to Mexico and the Republic of Honduras.

The species is also found in Australia, Thailand, and the United States of America, but its population in these locations is not as high as that in Mexico or Honduras.

The Jack Dempsey cichlids are most commonly found in marshy and muddy areas, where water pressure is low and flows at a slow speed. They could also be found in stagnant water in a ditch. These fish prefer warmer muddy water bodies over cooler ones.

They are also found in hillside water bodies, as they aid in laying eggs on hills, where they prefer to live in freshwater. While these are the most common areas where a Jack Dempsey fish would be found in its native country, it is also a popular species for aquarium in other countries like Thailand.

While they are aggressive and territorial, they are also considered shy. The Jack Dempsey cichlids fish, although they can be aggressive like other cichlids, can be easily kept with other fish in tanks and aquariums.

While other cichlid species might not coexist with other fish, Jack Dempsey can as long as it is given enough space and an area to hide whenever it feels shy. 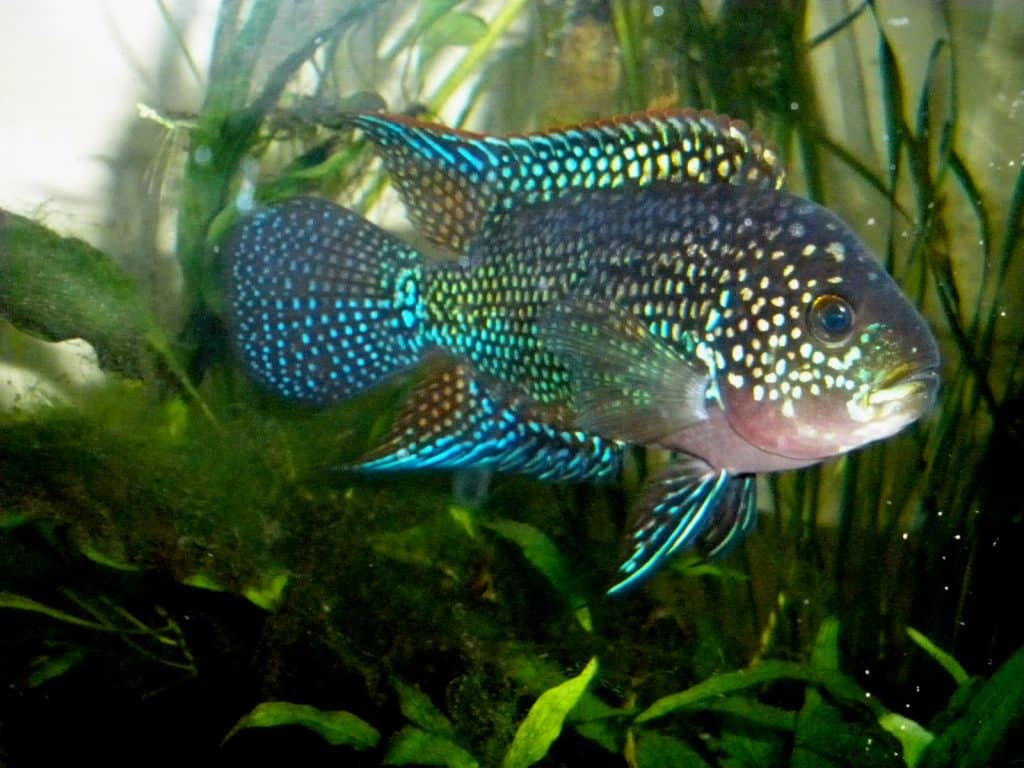 It is essential to maintain the environmental factors necessary for their habitat, for example, keeping the water clean from any ammonium chemical and keeping nitrate levels at a certain limit.

While younger fish or newborns might be better adapted to toxic water, they die in almost 4 years if the chemicals in the water are not kept to a suitable level.

Since the nitrate and phosphate levels build up with time in aquarium water due to organic decomposition, it is important to replace water from time to time.

Ideally, about 20 percent of the water should be replaced once in two months, and the decomposed organic material should be cleaned out.

It is also essential to have an efficient water filtration system. The water requirement is also high, at almost 50 gallons for 1 fish.

They should be kept in moderate lighting with 6.5 to 7 pH. The temperature should be kept about 26 centigrade, but during the breeding season, it can go up to 30 degrees too.

Although it is not essential, it is advised to decorate the tank to make it resemble their natural habitat.

Rock and wood are the best choices for this purpose, but plants can also be used, as these cichlids are less likely to destroy them. Some of the plants that can be used to decorate the tank are water wisteria and Java fern.

While Jack Dempsey fish are generally safe to be kept in tanks but they are not the best choice due to their aggressive behavior. Thus, it is important to consider which fish species to keep as their tankmates.

It should be noted that since the Jack Dempsey cichlid fish can eat small fish and fry, they should not be kept with fish small enough to be predated upon.

Since Oscar fish are a fast-growing species of fish, they are also likely to make good tankmates for them.

Other than another species of cichlids, they can be kept with goldfish, angelfish, Corydoras, and tetra. However, their popularity as aquarium fish has been declining in recent years, as compared to the other types of cichlids.

The Jack Dempsey fish are omnivorous and predators, so they mainly feed on other fish and fry like brine shrimp. They might also feed on small plants or milled seafood. They feed on worms, crustaceans, insects, and fish. They can also be fed frozen bloodworms.

When kept in an aquarium, their feed should be closely monitored. It is advised not to feed them too much meat, as a high amount of fat and proteins can be harmful to them.

It is also important to take care of their feed, as nutritional deficiencies, such as in minerals or vitamins, have been known to cause diseases. Their nutritional state also reflects on how they look on the outside by affecting their color and size.

Like any other species, the Jack Dempsey cichlid fish requires a specific climate in its habitat. It needs almost neutral water pH but can survive in slightly acidic pH rather than alkaline. It can survive over a fairly large range of temperatures, that is, 22 to 30 centigrade.

The Jack Dempsey fish are among the easiest fish to breed, as the female fish would usually lay around 500 to 800 eggs and make sure they lay them in a relatively safe area.

Despite the fact that the Jack Dempsey fish prefer marshy and muddy areas to live, the female Jack Dempsey ensures that they lay their eggs on a hard and stable surface.

Both the males and females are responsible for taking care of the eggs before they hatch and are incredibly protective toward their offspring. They might show aggressive behavior when their offspring are threatened.

They are quite likely to hide their offspring in caves or small ditches or any other place they deem safe from predators. 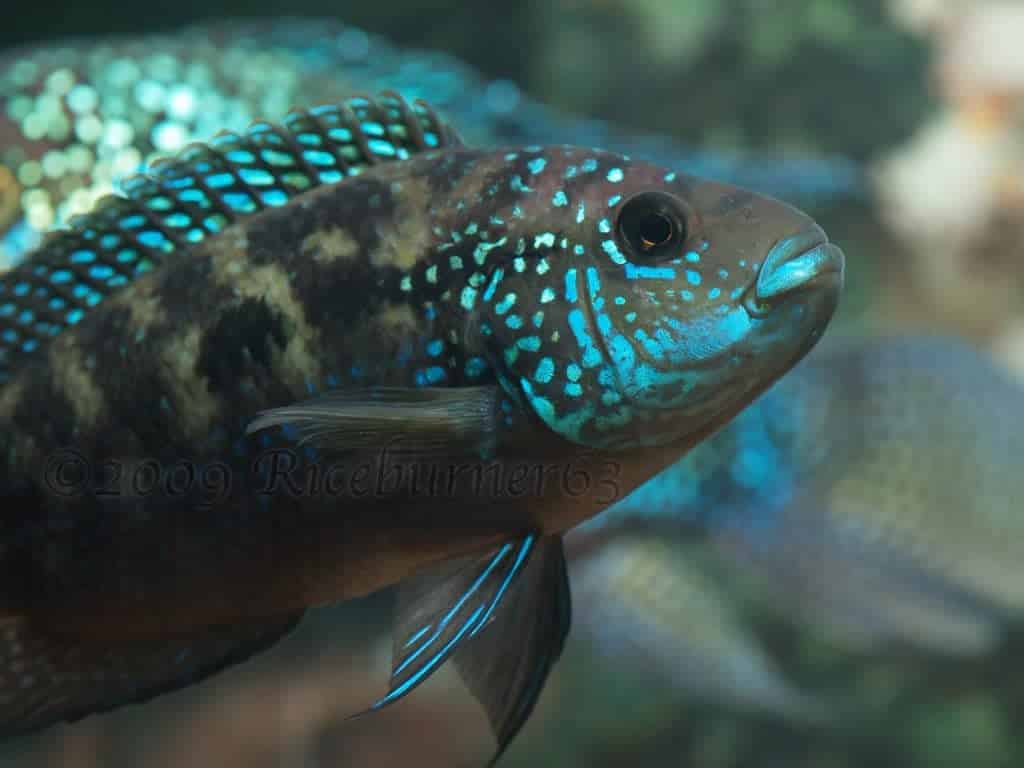 However, the Jack Dempsey fishes show a wide range of behavior toward their fry. While some are overprotective, others might eat their own fry. Some fish are also known to break and chew food for their fry before the fry eats it.

They are incredibly protective and territorial of their partners. The best pair for breeding is a female and male fish, but 2 or more females with one male fish might also work. However, it is impossible to have more than one male fish for one female fish.

The Jack Dempsey cichlid fish have a lifespan of about 10 to 15 years and grow about 0.5 inches in size every month till they are fully mature.

It is also claimed by some research studies that decorating the tank (if the fish are kept in an aquarium) can also be helpful during the breeding season.

Other factors to be kept in mind in the breeding season is to keep the temperature of the tank slightly higher than normal, keep the lighting dim, and feed the fish with high protein foods. It is also said that keeping the tank free of noise also aids in breeding more fish.

These cichlids are affected by any infections that can affect freshwater fish. One such common disease is Ich, which can be treated in aquarium fish by simply keeping the aquarium at a slightly higher temperature than usual for a few days.

They can be affected by other infections as well, and their nutritional deficiencies can also cause some health problems. These are mainly caused by being deficient in some vitamins like C and D or in minerals like calcium and phosphorus.

Unsuitable water conditions might also manifest in diseases. The fish are also prone to fungal or bacterial infections, so keeping aquarium water clean for them should be a priority.