Gourami fish (Osphronemidae) is one of the few species that does not require significant maintenance, and also get along well with other inhabitants of the aquarium.

It is a type of fish that many experienced breeders recommend to breed for beginners. A significant variety of Gourami allows you to create any color scheme in your aquarium to your taste.

History of Appearance in Europe

The motherland of the Gourami fish family is considered to be the reservoirs of Southeast Asia.

Fish feels good not only in clean rivers and lakes, but they are known to occupy gutters and even puddles. Nevertheless, for quite a long time, the gouramis did not succeed in introducing into Europe.

The dream of the French scientist Pierre Carbonier was to breed these fish in France. A large number of attempts to transport in barrels from Vietnam or Malaysia were unsuccessful.

All the fish back then would be transported via ships in wooden barrels, filled to the top with water, and secured with a lid. It was necessary so that during transportation on the boat, the fish could not jump out of the tank.

One observing European, while in Asia, noticed that fish occasionally float to the surface of the water to breathe air. It was this fact that no one had previously taken into account, as a result of which the fish died.

They decided to fill the barrels with only 2/3 of the water and not close the lid. In this way, it was possible to deliver all the fish to Europe without any loss. Gouramis appeared in aquariums only in the winter of 1896.

The habitat of representatives of gourami is the islands of Java, Sumatra, Kalimantan. These Tropical fish are also widespread in the water bodies of Indochina and the Malay Archipelago. 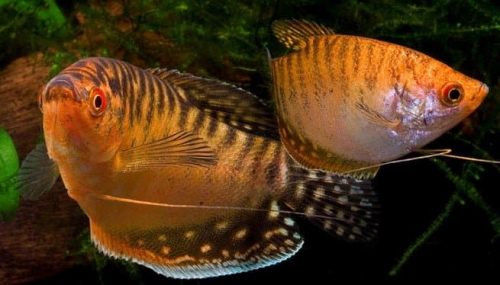 Gouramis inhabit not only quiet lakes, but also swift rivers. Also, they are known to thrive in the still water of ditches or large puddles. But even though Southeast Asia – rightfully considered to be the homeland, these tropical fish can also be found in the waters of Central America.

Description and Physical Appearance of Gourami

Another name for this Gourami is threadbearder. As they have long fins on their abdomen, which help the fish navigate in the water.

The length of adult fish in nature can reach 15 cm, but among the representatives, there are also record species, which grow up to 25 cm. In captivity, fish rarely exceed 10 cm in size. 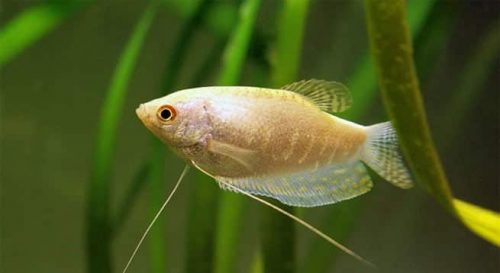 Since Gouramis in nature live most of their lives in muddy, stagnant water, during evolution, they developed an adaptation – the supra-gill organ, which is called the labyrinth. It allows them to swallow air and withstand up to eight hours without water.

The labyrinth in the suprajugular cavity allows fish to migrate from one reservoir to another.

The fins on the abdomen have a length equal to the length of the body of the fish. Very often, these fins, touching sharp stones, break, but soon grow back. Colouring is very diverse, while males are brighter than females.

The variation in the color of the Gourami is considerable, which allows you to choose a specific look for the aquarium. It can be either pearl or brown or marble in color.

Although the color scheme of these tropical fish is quite diverse, there are only four types of popular Gourami Fish:

The largest among aquarium Gourami is the brown Gourami, which in captivity can grow up to 15 cm.

The most interesting type for aquarists is Spotted Gourami because this is the species whose representatives may look different (have white, yellow, honey, blue color). 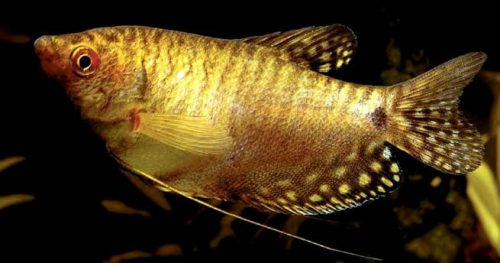 The most popular among aquarists are the following species and subspecies of Gourami:

Other Types of Gourami Fish:

If the aquarist decided to start the fish with Gourami, care, and maintenance for them should be selected optimally.

Since Gouramis belong to medium-sized aquarium fish, the capacity for their support should be at least 40 liters, and the water temperature should be in the range of 23–26 degrees. Still, its slight fluctuation will not harm the general condition of the Gourami.

The recommended acidity should be 6-7 units, and the hardness should be no more than 16.
Threader is undemanding to a significant amount of oxygen in the water so that a little aeration will be enough.

It’s best if you carry out a water change of at least 1/3. Since gouramis like to swim in the middle and upper layers of water, it’s advisable to cover the top of the aquarium so that pets do not jump out of it.

The care and maintenance of the Gourami are not tricky. Nevertheless, novice aquarists who decide to acquire such fish may experience difficulties in feeding the gouramis in the aquarium.

Gouramis are not picky about food, so dry food is right for them. Bear in mind that in natural conditions, they feed on insects, aquatic plants, as well as mosquito larvae.