Golden Wonder Killifish is also known as Malabar Killifish or Aplocheilus lineatus. It has an elongated body and shiny emerald eyes and belongs to the family of Aplocheilidae.

Golden Wonder Killifish leads an active lifestyle and can be found in rivers, swamps or mini-ponds. Due to their Pike like body shape, many people find these fishes as a predator that can destroy small fish.

Golden Wonder Killifish does not behave aggressively towards their species but they can eat their own Fry if it experiences severe hunger. It is normally kept in the same aquarium with barbs and cichlids. 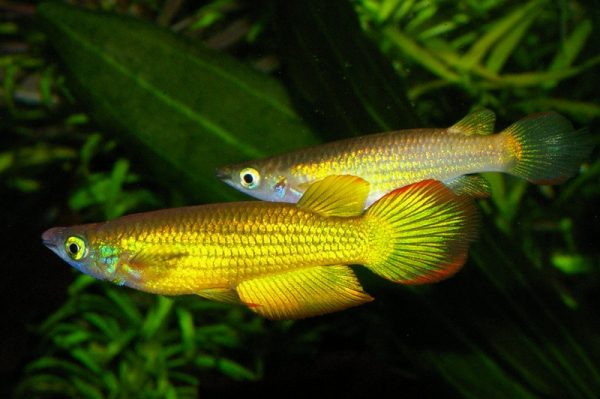 The peculiarity of this freshwater fish is its largemouth. When they have to catch the Fry, The Golden Wonder Killifish hides in the nook of the pond and attacks when prey swims close.

Before grabbing the fry, the Golden Wonder Killifish presses its tail, after which it straightens and makes a jerk. It is not recommended to keep a lineatus with small fish, as Aplocheilus lineatus might end up eating them.

The female can behave very actively. To catch an insect, she jumps out of the aquarium. Thanks to its developed fins, it easily repels and makes an attack.

Golden Wonder Killifish is a compact fish. The size of her body does not exceed 12 cm. Females are shorter than males, their bodies are 9–10 cm long. Their body is gray with a slight green or golden tints, dark stripes are located in the upper part.

The fish looks very beautiful when the light falls from the side. A distinctive feature of adult males is bright green scales. To constantly admire the beauty of the Golden Wonder Killifish, you need to place the lamps near the sight glass. 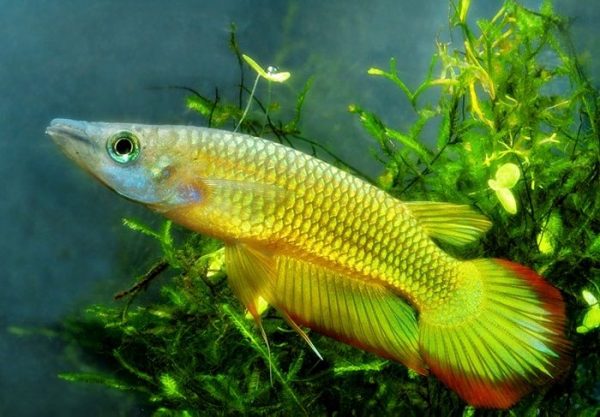 Females outwardly differ from males. Their body is gray with shiny scales. Fins in females are short, yellowish.

The natural habitat of these fishes are India and on the island of Sri Lanka. Golden Wonder Killifish prefers rivers and silty swamps. Residents of India use it to save their paddy fields from annoying insects.

Aquarists have been breeding a lineatus for over 100 years. It is valued for endurance and quick adaptation to new conditions. This fish does not place high demands on the aeration in a small aquarium.

Aquarists breed gold and red hybrids. The Gold color is rarely found in these fishes which makes these fishes a bit costly and Eye candy. Golden Killifish are often bred in the aquarium. A distinctive feature of these individuals is unpaired fins. 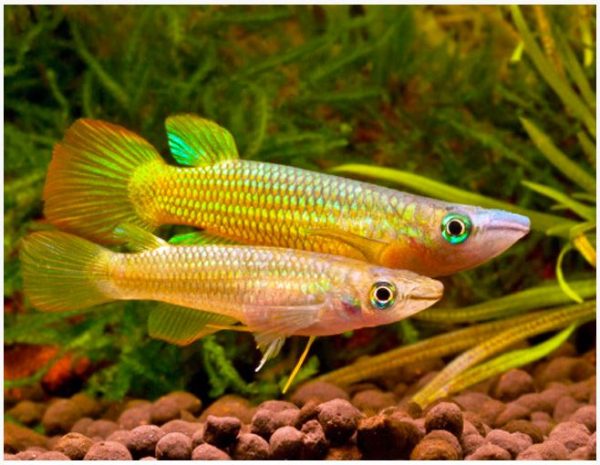 The red hybrid appearance has greenish stripes, shades of olive and red. The breast of such a fish is red with original scales and red dots. The iris is painted in emerald color. The fins are yellow with a green tint.

Golden Wonder Killifish does not cause much trouble for the owner and prefers a flocking lifestyle. It is recommended to place 8-10 pieces of this fish in one aquarium with a volume of 50L.

Golden Killifish does not place high demands on temperature conditions and aeration. She feels good in water with a temperature of +20 to +31 degrees.

When breeding fish at home, other important rules must be observed : 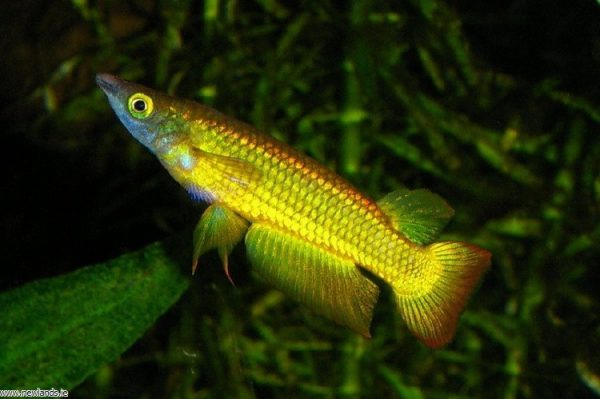 In a small aquarium, you can accommodate 3 males and 5-6 females. If you properly care for the Lineatus, it will delight you with its beauty for 5 years.

These Carp toothed fish has a developed jaw. They can eat a variety of food but prefer eating:

If Fry is released into the aquarium and no other food is given, it will feed on them. Lineatus responds well to dry food. You can give her cereal or something similar. For a freshwater fish to receive valuable substances, you need to feed him with crushed bloodworms. 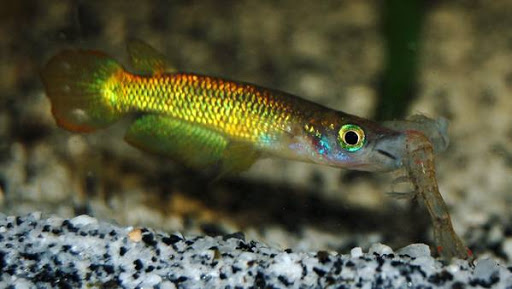 The lineatus is prone to gluttony, it should be given food in moderation.

If there is a suitable substrate in the aquarium, the fish willingly lays eggs. To obtain fry, it is necessary to transfer the substrate to a pre-prepared incubator.

Ideal for an aquarium with a volume of 18 liters. The fry takes root in the water at temperatures from + 25 to + 27 degrees. They willingly eat shredded plants.

Thai moss can be placed in the incubator, the plant will provide the fish with additional oxygen recharge. Spawning is faster if the water in the main body of water is soft and its temperature does not exceed + 27 degrees. 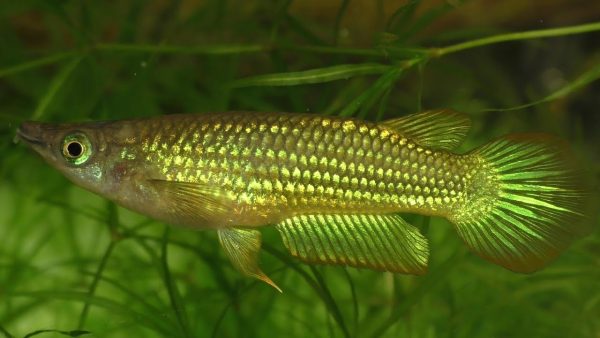 Mating takes place in plants. A fertilized female lays eggs on algae or other surfaces. It is recommended to transfer them to an incubator. With a favorable development, the female gives 90 eggs a week. Spawning lasts a month.  Fry will appear after 2 weeks.

Fish can eat their Fry. To prevent this from happening, you need to keep them in a separate aquarium. The fry feeds on crushed bloodworms, as well as other small insects.

If you feed the Fry well, they will grow rapidly. When the fish turns 1 month old, its body length reaches 1.5 cm. The Lineatus acquires a saturated color at the age of 6 months. The golden species of the Lineatus is not as prolific as the rest.

Golden Wonder Killifish has strong immunity, but with improper-care, it can be attacked by the infectious disease oodiniosis. Aquarium lineatus normally responds to drugs, if necessary, use them.

Golden Wonder Killifish easily gets along with their kind. He does not enter into conflict for no reason and willingly interacts with other inhabitants of the aquarium.