Frontosa Cichlid (Cyphotilapia frontosa) also known as humphead cichlid is a typical member of the Cichlidae family. A distinct feature of the fish is the hump on its head, which is present in both sexes and grows bigger as the fish matures.

It can attain a length of about 14 inches. These fish are originally found in the deep waters of an African lake called Tanganyika. Wild frontosa is not frequently seen and is thought to be a delicacy in Africa. The fish has a tolerant and gentle temperament, but it is territorial as well. It will thrive in a tank that has plants, rocks, and caves as well as a sandy bottom.

If the water condition and the tank setup are excellent, the mouthbrooding frontosa can breed easily. For every male, there needs to be at least 5 females to complete the breeding atmosphere.

The frontosa is considered to be a very handsome fish and is one of the top picks of cichlid breeders. It is quite large, reaching about 14 inches or more, and has very extravagant coloration.

It has about 6 black bands with a background that is white or blue. Some fish even have a gold touch on their dorsal fins. The coloring makes it a great-looking fish and a good addition to showing aquariums. 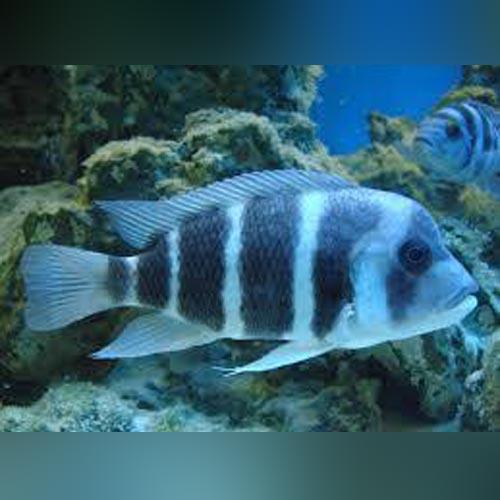 Frontosa also are known as the humphead cichlid as both sexes have a hump on the head (which can only be seen in adult fish). The male fish will have a bigger hump and longer fins.

Both sexes also take time to mature to breeding age, which will take about 3 to 4 years.

The color varieties of the fish depend on which region of the lake they come from such as Bulu Point, Kasanga, Kavala, Zaire, Kapampa, Samazi, Kigoma, Mpimbwe, and Chaitika.

Most of these varieties are hard to collect, which is why they are not commonly exported.

The frontosa was first described in 1906 in Lake Tanganyika in Africa, but it was identified as its species in 2003 due to the difference in its habitat and diet. 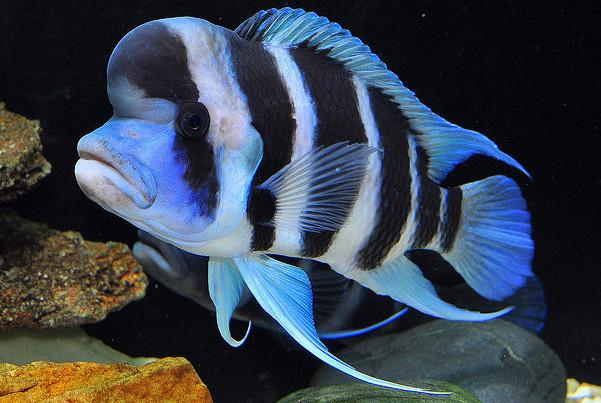 It is found in different regions throughout the entire lake. At the moment, it has no threats and is listed on the IUCN Red List as Least Concern.

It is a deep-water fish and can be found as deep as 350 feet. Its main diet consists of other small fish, thus making it carnivorous. These fish are maternal mouthbrooders and are mainly found in the northern half of the lake.

The frontosa is mostly found on the sloping lake bottom off the shore. Its groups can be found 35 to 170 feet underwater; some say it’s even more, at around 350 feet. It usually resides in rocks so that it can hide and feed on snails, mussels, and fish.

Keeping the frontosa means that medium to high care and maintenance of the tank will be required. The best way to manage it is to change 10-20% of the tank water every week.

In the case of nitrate or ammonia buildup, water changes and management will be required more frequently.

Keep in mind that these fish cannot manage large water changes at a time. In case a complete water change is required, the new water conditions must be kept as close to the old ones as possible.

One good way of managing this is to change 15% of the water every two days so that the chemistry goes back to normal. The reason that these fish cannot bear such water changes is that they live in deep waters where the condition stays stable.

A 70-gallon tank (which is at least 48 inches in length) will only be good for a single frontosa. To house, a whole group of it, at least a 125-gallon tank will be required, though a 200-gallon one would be best for long-term care.

The bottom of the tank will need to be layered with sand or gravel with normal to moderate lighting. The water movement needs to be moderate as deep waters are rather calm.

These fish lie on the carnivorous spectrum, which is why they mostly eat all kinds of live food. Wild fish usually eat other small fish and shellfish such as mussels and snails. In the aquarium, they do not feed on food too quickly.

They will eat fish pellets but will also need a little variety of meaty foods like feeder fish, crustaceans (shrimp, krill, and mysis) and worms. Brine shrimp is also good for them as it provides high levels of protein. If feeder fish are to be given to the frontosa, it is best to give them dead ones as live feeder fish tend to carry pathogens and various diseases. The frontosa will also benefit from other supplements and vitamins in their food.

The best way to go about it is to give them about 2 or 5 portions of food every day in small quantities. Food given once a day in large quantities is not recommended. This ensures that the quality of water is maintained for a longer period.

Flake food is not a good option for them, while live food makes a part of their diet. Their main diet will consist of meaty food.

The breeding possibility of this fish is easy. The frontosa has been bred in captivity for a long time. However, some types are easier to breed than others.

These fish form matriarchal families, where one male will easily produce eggs with several females at a time.

There are options to either buy a group of breeding frontosa or get a group of juvenile ones and wait for them to grow up into breeding groups. A good number to start with is 10 or 12 at a time. When the juveniles start growing, the biggest frontosa will need to be removed, and so on; try doing it every 6 months as the biggest ones tend to be male.

In the end, there will be only one male left with 4 to 5 females. A male at its maturity will be about 7 inches long and a female about 5 inches.

One thing that needs to be kept in mind is that it will take about 3 or 4 years for the juvenile fish to reach complete sexual maturity.

Males tend to reach maturity much later after females, so a lot of patience is required to raise these fish to their full breeding potential.

The process of breeding is quite simple. In the wild, the female is a cave spawner and a mouthbrooder, but in an aquarium, she would like to spawn on a substrate. Hence, a large aquarium is needed for breeding purposes. It should be able to support at least 100 gallons, with proper rocks, caves, or flowerpots so that the males can create their territories.

The breeding water needs to be moderately alkaline with medium-hard water (the pH needs to be around 8) with 10 degrees and a water temperature of around 25 to 28 degrees Celsius.

The females will drop around 50 eggs in the sandpit and between the rocks, which will then be fertilized by the male. The eggs will hatch after 3 to 4 days. The female takes the eggs in her mouth, and it is the responsibility of the male fish to defend the territory.

The female will take care of the little ones for about 4 or 6 weeks, after which they will be on their own. The juvenile fish can be fed live baby brine shrimp.

The frontosa isn’t very aggressive, but it is territorial, so it will defend its territory. Hence, it’s best to keep these fish alone in a tank or a group of frontosa fish.

Also, it is a raptorial feeder, so it will eat any small fish. The frontosa is a slow fish, making it a slow eater, so one mate for it can be the Malawi fish, but their life will be a stressful one in the tank.

In a properly maintained aquarium, the frontosa fish are hardy. They are susceptible to typical ailments that fish face and will fall ill if the water in the tank becomes poorly oxygenated and stale.

The best way to keep them in top shape is to maintain healthy water, properly feed it, and avoid overcrowding. 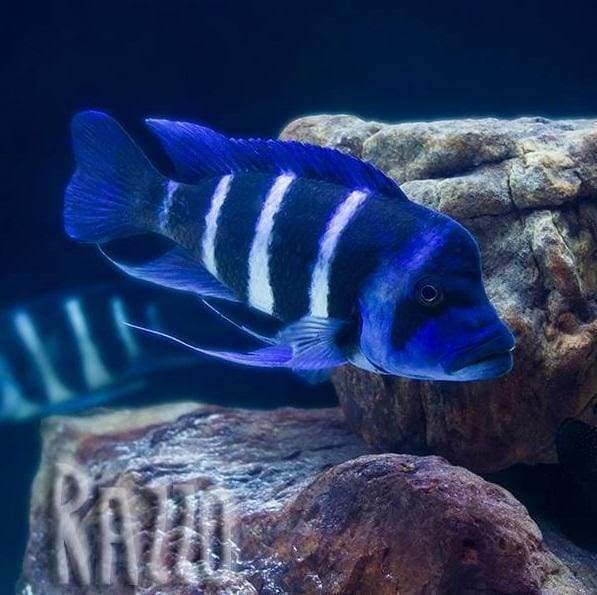 A common issue that this fish may face is ich, which can be treated by increasing the water temperature to 30 degrees Celsius for 3 days.

If that does not work, the water will need to be treated with copper at an appropriate level. Some of these fish are also prone to skin flukes, parasitic infestations, and bacterial and fungal infections.