Flowerhorn fish also known as flowerhorn cichlid is an interspecific hybrid of several South American cichlids obtained by breeders from Malaysia. The first attempts of crossbreeding started back in 1993, and five years later, the world was presented with the first Flowerhorn fish. However, this does not mean that all the hybrids are successful, some become sterile whereas some don’t have good coloring after such breeding.

However, the others turn out to be quite interesting, such as one of the most famous tank fish, blood parrot cichlid is the result of such artificial crossing.

The breeders found the hump on the head of a flowerhorn fish quite fascinating and hence named the fish ‘Karoli’, the meaning of which is fighting the ship.

However, Till this day there is no answer to what kind of fishes were bred to get flowerhorn cichlid as this information is only known to the ones who bred it.

What is interesting about this fish? The “visiting card” of the flower horn is a highly developed growth on the head. It consists mainly of adipose tissue. The inhabitants of Asia are very fond of fish with “hats” because they are a symbol of the god of good luck and longevity.

Flowerhorns, along with Arowanas, are the “favorites” of the followers of the teachings of Feng Shui. The aquarium with these fish, in their opinion, will undoubtedly bring prosperity to its owner.

According to aquarists, flowerhorn cichlid comes from the breeding of red terror, cichlasomalabiatum, Cichlasomatrimaculatum, and Viejasynspila. To find out more interesting information regarding flowerhorn cichlids keep reading further.

The flowerhorn cichlid grows up to the size of approx. 30 cm or 12 inches. A few also grow up to 40 cm in length. Their growth rate is quite fast and hence rather impressive. They are capable of growing up to 2cm in a month during the first year of life.

One interesting thing about flowerhorn cichlids is that they are very lenient while choosing their couple match and hence they pair up with different cichlid fish types as well.

Flowerhorn cichlid is a large, basic American cichlid. It has a large bulky body, a vibrant colored hump on the forehead, and fan-shaped unpaired fins. Both the males and the female flowerhorn cichlids have a hump on their heads. However, this is the only common trait between them. It’s not usual to see two similar flowerhorn fish. This is because each flowerhorn fish, even the ones that belong to the same breed differ from each other in terms of body shape and coloring.

The color of a flowerhorn cichlid ends to change during its life and it gets more beautiful when the fish becomes mature.

According to a study of the fish, the flowerhorns can be divided into different groups, each of which has its dominating features common with their parental type.

The most common color of a flowerhorn fish is red and almost all of them have black spots, regardless of their color. The lifespan of a flowerhorn cichlid is about eight to ten years. However, some can live even longer if their care is taken properly.

The flowerhorn is an artificial fish that is not found in the wild (with the exception of individuals that were accidentally or specially released by the aquarists themselves). The ancestors of the hybrid are the famous cichlids of South America.

At present, a wide variety of forms has been obtained, which are classified into several groups, depending on a number of characteristics (lump size, color, etc.). The most popular ones are KamFa, Malau, Zhen Zhu, and Thai Silk.

Every fan of a flowerhorn should understand that this fish needs a spacious aquarium because of its size. Truly, This fish will reveal its beauty only in a huge species aquarium of 800-1000 liters.

It is recommended to keep these cichlids in pairs, while it is imperative to monitor the behavior of the male. For various reasons, he can attack the female and cause her damage.

If you have a suitable aquarium for volume and a desire to contain several pairs of flower horn, be sure to zone the territory and install a large number of shelters in order to minimize conflicts between fish.

Flowerhorns are incompatible with living plants. Almost any greens will be eaten or dug up. Therefore, it is desirable to select larger soil and make the layer larger, because flowerhorns love to dig at the bottom.

For the same reason, any decorations must be firmly fixed and positioned so that when they fall they could not damage the walls of the aquarium. Most often, compositions with stones and snags are used.

A powerful external filter and good aeration, as well as weekly water changes up to 20% of the volume with mandatory soil cleaning, are required in the aquarium.

Since the fish is capable of easily adapting to water parameters, taking care of flowerhorn cichlids is not a difficult task. Also, you can easily manage its feed as well, since it consumes any kind of protein-containing feed, both live and artificial ones.

One important thing to know is that even though the fish might seem suitable for beginners, in reality, it is not. This is because firstly it is a very large fish and needs a large spacious tank to survive. Secondly, this species of fish is very territory dependent and aggressive, hence it is recommended that the fish is kept alone in a tank, without any plants and tank mates.

It is easier to find more peaceful and smaller cichlids for beginners. Also, this cichlid is aggressive – flowerhorn cichlids can also attack and bite the hand of the owner while they are being fed.

Flowerhorn cichlids are known to have a good appetite as long as the health of the fish is fine. They consume both dry feed and live feed.

Flowerhorns are known to especially like common frozen prawns, mussels, and special dry feed for flowerhorns.

It can also be fed fresh sprats, blood worms, low-fat fish (like goldfish), and pieces of calamari. For a healthier diet, you can include some feed based on spirulina or plant additions. 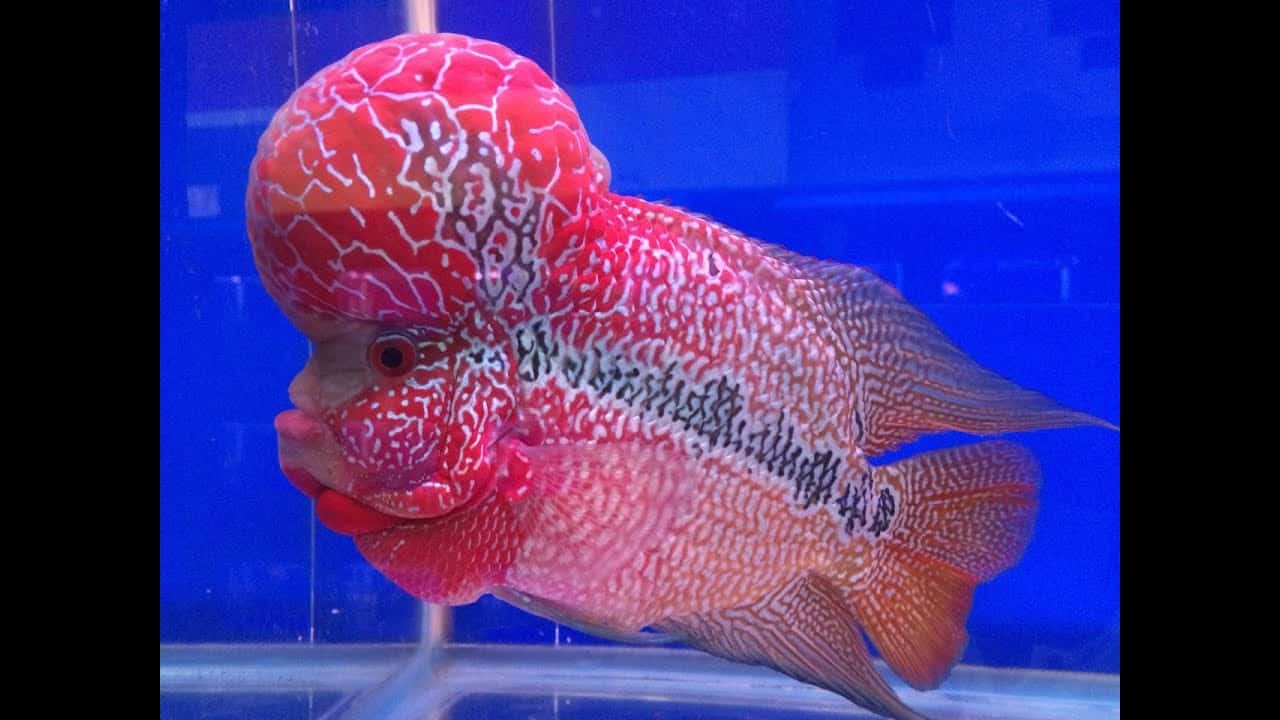 You might find it surprising how fast the fish swims up to the feeding hand in a community tank.

Also, flowerhorns are not scared or shy of humans and can let you touch them as well when they are not aggressive.

However, proper care should be taken when you have your hand near them, as they can always bite. You mustn’t overfeed them as that can make the fish sick.

Just like every other large-sized cichlid from South America, this one too requires a tank that is large and very spacious. If you keep the fish alone in a tank that then the minimum capacity of the tank should be 70 gallons, but its better if the tank is even larger than this.

If you keep a couple, then the minimum capacity of the tank should be around 100 to 120 gallons. If the tank maters of the flowerhorn are other cichlids, then a tank of capacity 175-200 gal might be needed.

To keep the fish healthy and happy, make sure the water in the tank is clean and has a moderate flow. You might need to clean the tank every week since flowerhorns tend to make a mess while eating.

As far as decorations in the tank are concerned, you should not bother with them since the cichlid is not fond of plants and likes digging. Avoid putting any plants in the tank since the fish will ruin them immediately.

For substrate, you can use gravel and for covers, big rock and snags can be used, however, the fish is very active and does not hide a lot.

Since flowerhorn cichlids are very aggressive and are territory dependent, hence they do not become peaceful tank mates. It is recommended that you keep one fish alone or either keep them in a couple.

But if you still want your flowerhorn to have tank mates then the tank should be very large. Even big sized fish like angelfish are in danger.

To reduce the aggressiveness of flowerhorn fish, large-sized fish and a lot of covers are required in the tank.

The fish that have proven to be good tankmates for flowerhorns are Plecostomus, black pacu, jaguar cichlid, sailfin pleco, Blue Acara, and tiger Oscar fish.

When the fish is about to breed, keep in mind that the aggressiveness of the fish spreads hence take proper care of the couple, so they don’t kill one another.

If you want to get flowerhorn juveniles that have a similar color to their parents, you need to know the purity of their breeding line.

Otherwise, the young ones won’t be of the same color as their parents.

The breeding of flowerhorn fish is very much similar to every other South America cichlid breeding. The fish is likely to breed in the tank in which it lives.

However, one problem that might arise during breeding season is protecting the female from the male flowerhorn’s attack. It often happens that the female fish is not ready for spawning, yet the male flowerhorn starts to hunt and attack the female.

To avoid this, make sure that the tank is spacious and there is space for the female fish to hide so the male won’t see her.

Alternately you can also divide the tank by using a net, to keep the female safe from the male fish until they are ready for spawning. However, you might be required to create the conditions to stimulate the fish for spawning.

The pH of the water should be neutral at 7.0 and the water temperature should be around 20° Cto stimulate flowerhorns for breeding. The water in the tank should be renewed with fresh water regularly as well.

Rummy Nose Tetra is a small fish from the Characidae family, which is often found in home aquariums. In nature,...