Fahaka Pufferfish (Tetraodon lineatus) also known as Nile Puffer or Banded Pufferfish is a ray-finned fish from the Blowfish family.

Fahaka Pufferfish is one of the most interesting and liked fish among the aquarium hobbyists. They differ not only in their extravagant appearance but also in simply amazing forms of behavior.

You will never get tired of watching these fish hunt, eat their prey, or carefully examine the aquarium.

There are both very small representatives and real giants in this group, one of which – the Tetraodon lineatus – we will talk about in our article.

The Fahaka Pufferfish is a large ornamental fish that can grow up to 40 cm in length under suitable conditions. The size of the Fahaka Puffer can differ while keeping in a tank because it needs a large aquarium.

However, this does not stop true connoisseurs, because this species is one of the brightest representatives of the Blowfish family. Sometimes fish of this group are called “dogs”, and the Fahaka Pufferfish fully justifies this nickname.

Having lived for some time in the same aquarium, the fish becomes so attached to the owner that it swims out when the owner enters the room, whirls in one place waiting for food, and let’s owner-pet themselves.

It is a pleasure to watch the Nile Puffer. The ability to swim in any direction, the eyes that move independently of each other, and the characteristic teeth of the family will delight anyone.

The fish has one “drawback” – increased aggression towards other aquarium inhabitants.

Therefore, if you are determined to get yourself this puffer, then you will have to come to terms with the fact that he will remain the only fish in the aquarium.

Like other members of this fish family, the Fahaka Pufferfish is able to quickly swallow water or air in an emergency, taking the shape of a perfect ball.

Such an adaptation in nature has a protective function.

Not every predator will be able to swallow such a “ball”, however, even if this happens, numerous needles scattered all over the body will cause serious injuries to the unwary aggressor. Of course, with home maintenance, you should not set up such experiments and make the fish swell, because stress will negatively affect the well-being of the pet.

However, this should be taken into account when buying fish, it is better to use a glass or plastic container for transportation since the standard package can be easily torn apart.

It should be noted that in some internal organs of Fahaka Pufferfish, a deadly poison, tetrodotoxin, accumulates. This is typical for all representatives of the Blowfish family.

The Fahaka Pufferfish has an oblong, pear-shaped body up to 40-45 cm long. In the head part, two large protruding eyes are distinguished, which can rotate independently in any direction.

The mouth is large, with fleshy lips and characteristic outgrowths on the jaw, resembling teeth (hence one of the names of the family – Four-toothed).

There are many small spines on the abdomen and lower part of the head. 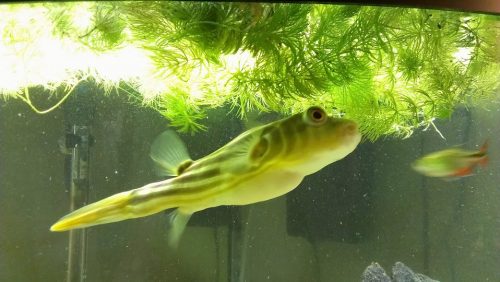 The upper part of the body of the Fahaka Pufferfish is colored light brown with longitudinal curving with white or yellow stripes and the abdomen and tail are yellow.

The body color of fish is variable and depends on many factors: age, mood, conditions in the aquarium.

The life span of the Fahaka Pufferfish is about 10 years.

The natural habitat of Fahaka Puffer is numerous reservoirs of western, eastern, and northeastern Africa.

Fish can be found in the basins of the Nile, Gambia, Niger, Senegal, and Lake Chad.

Fahaka Puffers prefer backwaters with dense thickets of aquatic plants, at the bottom of which they find their favorite food – a variety of mollusks and worms.

To keep Fahaka Pufferfish, you need a spacious aquarium with a volume of 200 liters or more.

It is worth noting that the Fahaka will live completely alone in the tank because it is almost impossible to find fish that can get along with them.

As a soil, coarse river sand with a layer of 4-6 cm can be used.

An interesting fact: Fahaka Pufferfish have ways to bury themselves in the sand so that only two large eyes remain in sight.

It is recommended to use smooth stones and driftwood as decoration. It is irrational to put live plants with this fish as they will be bitten and torn out.

The lighting can be of any level.

The Fahaka Pufferfish are very sensitive to the content of nitrogenous compounds in the water, so fish should only be kept in an aquarium with an established balance.

It is necessary to ensure good filtration (you will need a productive external filter) and aeration of the water (a powerful compressor will help).

Once a week, 20% of the water should be changed in the aquarium.

Many aquarists use tap water for water changes, completely forgetting that it can contain a number of compounds dangerous to fish, such as chlorine and heavy metals. In large aquariums, this becomes a laborious task. To avoid the hassle of settling and instantly make your tap water liveable for your fish, use Tetra AquaSafe.

It will not only remove dangerous chlorine compounds and heavy metals from the water but also bring a number of useful vitamins and minerals into it.

Due to the aggressive nature of Fahaka, Keeping them in common aquariums is practically not possible.

This owner of hard and sharp teeth will attack all of its tankmates. He is able to tear off a piece of the body from large fish, and easily tear small ones apart.

Even with its own relatives, the fish gets along very badly. Whenever they meet, They will attack each other.

The natural diet of Fahaka Pufferfish consists primarily of mollusks, insects, and other invertebrates. This is a real predator with a pronounced hunter instinct.

At home, the Fahaka menu should include the following components:

Fillet of fish, shrimp, crabs (can be together with shell); Snails – by gnawing their shells, tetradons grind their “teeth”, which grow in them throughout their life.

Fahaka is capable of tearing apart even a large ampullary. Young fish are fed every other day and adult to be fed twice a week. Be careful when you put your hand to hungry Fahaka aquarium, as they can attack.

When they are full, the fish let themselves be stroked without any problems.

Some owners note that hungry Fahaka, with their entire appearance and behavior, indicate a desire for refreshment: some begin to swell, others gnaw on equipment or plastic decorations.

Breeding Fahaka Pufferfish at home is a difficult and practically impossible task, which is associated, first of all, with the increased aggressiveness of representatives of this species.

Sexual dimorphism in fish is not pronounced.

The female gives out a more rounded abdomen, as well as the appearance of the ovipositor just before spawning.

Fish reach sexual maturity at the age of about a year. Pairs are fragile, formed only during the breeding season.

During spawning, the male turns over onto its back and grabs the partner by the lower jaw. At this time, the female lays eggs, which the male immediately fertilizes.

This process is repeated many times, one pair can lay several thousand eggs. The caviar sinks to the bottom, and the parents are removed from the spawning tank.

Incubation takes 72-96 hours after which the larvae are born. At first, they lie down on the bottom.

During this period, it is important to lower the water level as much as possible so that the fry can reach the surface.