Emperor Tetra (Nematobrycon Palmeri) is a freshwater ray-finned fish from the Characin family. They originate in South America. This species was named in honor of the American wildlife collector Mr. M.G Palmer, who found these tetras for the first time.

If you want to at least touch the “Royal Dynasty”, then be sure to get an Emperor Tetra in your tropical aquarium. This magnificent representative of the characin family is sure to amaze you with its charm. 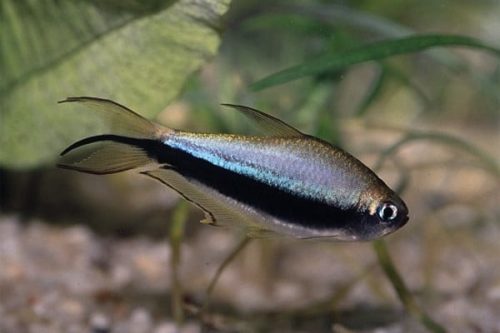 The right way to care for these fishes has been highlighted in the article below.

The emperor tetra is popular with hobbyists because of its original appearance, peaceful nature, and excellent stamina. The title “Emperor” has been given to this fish due to their unusual fin, which very much resembles a crown. These have an interesting feature of floating around the aquarium at a 45 ° angle.

These fishes are of two types, Tetra Kerry and Emperor Tetra. However, it is very easy to distinguish the two species, just look at the tail, and everything falls into place: the “False queen” does not have a characteristic crown.

Emperor Tetra belongs to the miniature fish category. The size of an adult does not exceed more than 4 cm. These fishes have an elongated bodies with a curved backlines. The mouth opening is small, with clearly visible teeth, but the eyes are large.

The main body color is pinkish brown. Under suitable conditions, the color of the fish clearly shows blue and purple hues. A wide dark stripe runs along the sides of the body. The fins are transparent, may have a yellowish tint and a black and blue border.

Life expectancy of Emperor Tetra at home is about 5 years.

In natural conditions, Emperor Tetras live only in the basins of the San Juan and Atrato rivers, which are located in the northwest of Colombia. This species prefers small backwaters, small tributaries with a slow current, and streams flowing under the cover of evergreen tropical forests.

The Emperor tetras are schooling fishes and they must be kept only in groups of 6 or more individuals. If these fishes are left alone, they might feel stressed which could lead to weakness and even death. The recommended volume of the aquarium is 60 liters. These fishes have a great jumping ability so there must be a lid over the aquarium.

You can decorate the aquarium in a natural style. Emperor Tetras will look best on sandy ground. It is worth placing natural driftwood in the container and creating islets of plants. The most light-loving species should be excluded from the list of plants since emperor tetras are not very fond of bright light.

Be sure to put floating plants on the surface of the water ( hornwort, riccia, pistia, etc.). It is useful to add a Tetra ToruMin conditioner to the water. It contains natural peat extract and gives the water a characteristic “tea” shade.

They do not need truly “royal” care, but these individuals will have to provide clean and well-oxygenated water. Therefore, a filter and a compressor must be fitted in the aquarium. Do not forget the thermostat which maintains the right temperature for the fish.

The water in the aquarium must have some freshwater. Most aquarists use tap water for these purposes, which poses a real threat to the life and health of pets. Indeed, quite often there are such dangerous compounds as chlorine or heavy metals.

This is a peaceful fish that will not offend any of its tankmates. The best tank mates for Emperor Tetra are Varieties of Tetras, Galaxy Rasbora, Harlequin Rasbora, Pearl Gourami, Pencil Fish, Honey Gourami, etc. You can also put these fishes in other dwarf cichlids like Apistogramma.

You should not keep fish bigger than its size Unless you want it to be an easy snack for a predator.

Their diet consists of small crustaceans, worms, insect larvae. At home, the fish eat excellent dry food. These can be the world-famous TetraMin Flakes and have over 40 selected ingredients and are ideal for most tropical fish.

You can also use a special food designed for miniature fish, Tetra Micro Crisps, ideal for the smallmouth of the Emperor tetra.

As a treat, Tetra FreshDelica delicacies, for example, bloodworms in nutritious and tasty jelly, have proven themselves perfectly.

It is quite easy to get offspring from Emperor Tetra at home. First of all, You need to select your parents. Males of Emperor Tetra are larger and brighter than females. Their fins are better developed, with long veils, and the rim of the eyes is blue (in females, its color is closer to green).

These fishes need to be planted and fed before spawning. At the same time, you can make changes in their tanks with softer and acidic water, which will serve as an incentive for spawning.

Spawning itself takes place in a separate container with a volume of 20 liters or more with a water level of about 15 cm. A separator mesh or bunches of Java moss is laid at the bottom. Water hardness should not exceed 10 °, it is better if its pH is less than 7. 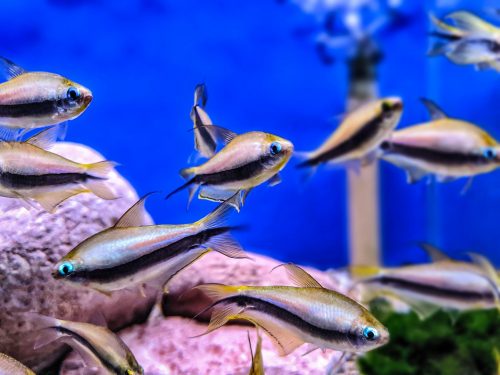 Spawning in groups is possible when there are several males per female and in pairs. The selected pairs may not always succeed, so it is advisable to prepare several pairs. In the spawning aquarium, the male begins to look after the female, then the process of spawning and fertilization of eggs takes place.

The parents are removed after the process, The female emperor tetra is capable of producing up to 150 eggs. After removing the parents, it is necessary to halve the water level and darken the aquarium. Incubation usually takes 1-2 days, after which the larvae, unable to feed on their own, are born, which live off the yolk sac.

When they turn one month old,  the fish acquires dark stripes on the sides and begin to swim characteristically upside down at an angle of 45 °. They become fully colored 3 months after hatching.

Maturity in an Emperor tetra occurs at the age of 7-12 months.