Elephant Nose Fish – Probably, everyone who has an aquarium at home wants to have such an exotic fish that is not too demanding and, at the same time, has an unusual and superb appearance.

The most suitable option in this regard is considered to be an Elephant Nose Fish (Gnathonemus petersii). If you create optimal conditions for this pet, then it will never cause unnecessary trouble. Exotic Elephant Nose Fish is also known as the Nile elephant, or Peters elephant lives in the wild in the freshwater rivers of Africa, namely in the reservoirs of the central and western parts of the mainland.

Elephant Nose Fish prefers to settle closer to a silty, densely overgrown with grass bottom. Even better, if among the vegetation, many snags and logs act as shelters.

It should be noted that this Nile elephant fish is not a very large fish. In nature, it grows up to 22 cm, and in an aquarium, you can rarely find an individual longer than 15 cm.

Due to life in muddy water, elephant fish has a dark, almost black color appearance. On its flattened lateral trunk, there is no scale, which makes it look velvety. A distinctive feature of the fish is the lower lip, which is much longer than the upper lip and resembles the trunk of an elephant.

It is thanks to this structure of the oral apparatus that fish quickly obtain food from silt.

The eyes of the elephant Peters are rather poorly developed. This is due to the fact that the fish prefers a nocturnal lifestyle.

Therefore, an organ that is located on the tail and produces weak electrical impulses helps to search for food, a partner, and also to explore the terrain to the elephant.

They have some electroreceptors located on the head of the fish, and they help create a picture of the world.

Elephant Nose Fish or Peters’s elephant is not too careless so that it can be recommended both for beginner aquarists and experienced specialists.

The main thing in caring for this fish is to create conditions that are most suitable for it :

The size of the aquarium – It should be noted that for elephant fish requires a reasonably large living space.

So, for one individual, an aquarium with a volume of at least 200−250 liters is suitable, and to make the fish feel comfortable, it is recommended to start a flock of 5-7 “elephants.” Therefore, the aquarium should be appropriate.

Water parameters – These fish live in nature in warm bodies of water, so special attention should be paid to the temperature in the aquarium. It should be between +23 and +28 degrees.

We must not forget about the hardness of water (5-15 units) and acidity (6.5-7 units). Elephant Nose Fish are susceptible to chemicals, so you should install a fairly powerful filter, replace the third part of the water in the aquarium once every seven days with fresh.

Regularly need to siphon the bottom, removing food residues and traces of the pet’s vital activity.

Since the elephant fish collects food from the bottom, looking for it with the help of its “trunk,” the best solution would be to use river sand or polished gravel with peat crumb as soil.

Make sure to carefully check it so that it does not have sharp stones or any foreign objects that could injure the mouthpiece of this exotic fish.

It is better to choose dim lighting, as Peters elephants prefer to lead a nocturnal lifestyle. Also, these fish are susceptible to antibiotics, ammonia, and nitrites.

Therefore, a filter in the aquarium needs a reasonably powerful, but not creating a strong current, which Peters elephants can not stand. Be sure to equip the aquarium with a lid, as the fish quite often jump into the wild. It is essential to consider that the Nile elephants are incredibly harmful about metal objects, which, because of this, are best not to be used as decorative elements.

Peters elephants will happily eat both live, frozen or dried food. During feeding, all pets must have enough food.

The problem may arise since Peters elephants are not too mobile and very peaceful; they will never fight for food with other inhabitants of the aquarium.

Quite often, you can see how the owner feeds his pets with tweezers, offering an individual piece to each elephant.

Elephant fish are very peaceful. They get acquainted with other inhabitants of the aquarium quite interestingly – they gently touch them with their “trunks” without causing harm. 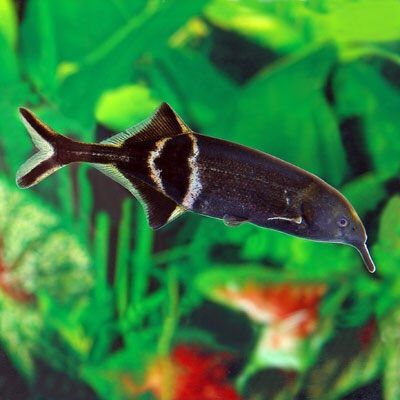 The best tankmates are :

These fish will never offend the elephant Peters and will be able to get on well with him.

Quite often, novice aquarists are concerned about the fact that the Nile elephants produce electrical impulses, which theoretically can injure small fish.

This is ruled out. Elephants have too low electrogenicity, so they are unable to harm anyone.

Nile elephants belong to the category of fish in which sexual dimorphism is practically not expressed. Females differ from males only in that they are slightly larger and have a rounded abdomen.

In principle, the gender of the acquired pet is not very important, since it is not possible to get offspring in captivity from Nile elephants. Scientists have not yet fully understood the reason. They suggest that in an aquarium, the electrical impulses emanating from the fish are distorted. 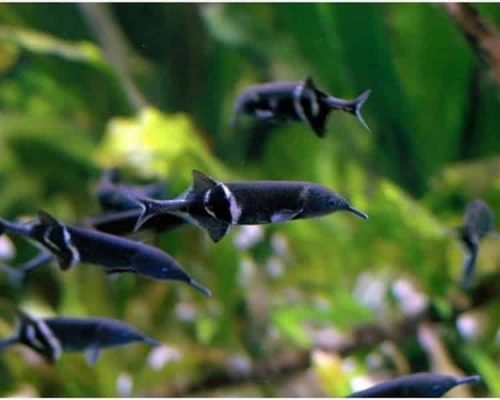 As a result, males and females cannot locate each other. But so far, this is only a theory. Perhaps soon, scientists will be able to study these unusual exotic fish better, and then get offspring from them.

Thus, both specialists and beginner aquarists should not be afraid to buy Nile elephants.

If you buy a healthy fish and adequately care for it, then it will be able to please its owner for many years because, in captivity, pets live for at least ten years.