Electric Blue Jack Dempsey or blue Cichlasoma (Rocio octofasciata) belong to the cichlid family, which is widespread among ornamental fish. In the wild, This beauty is found in the waters of Honduras and Mexico.

Aquarists face quite a number of difficulties in breeding this fish which explains why such an attractive and gorgeous variety of cichlids is rarely found in pet stores and why it is expensive. 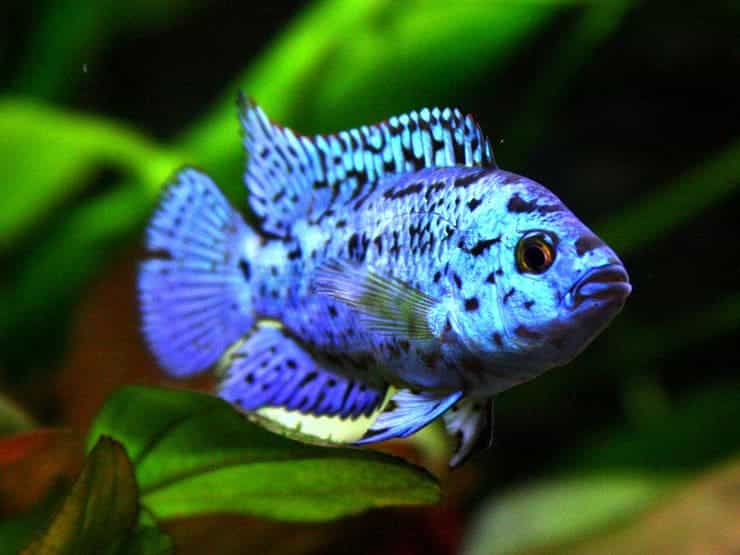 Electric Blue Jack Dempsey is a fish with an amazing story. The blue Cichlasoma was bred by the Argentinean Hector Luzardo by crossing related species of Cichlasomas, Diamond, and Rocio octofasciatum.

A zealous amateur aquarist took 10 years of hard work to stabilize the mutation.

The Diamond Cichlasoma gave Dempsey a pearl neon glow, because of which this fish is sometimes called an electric blue. Much later, fish with similar traits were discovered in the wild. In wild, Dempsey prefers canals with a silt-covered bottom and dense vegetation.

Dempsey’s head is large, with large expressive eyes. The neat mouth is fitted with thick labial arches. The body is decorated with black spots and broken lines. Large areas of the body, as well as fins, have a neon blue color.

The combination of blue and black makes the fish bright, memorable. Males have black spots on the tail, body.

Why these are perfect fish for big aquariums?

Another characteristic feature of Electric Blue Jack Dempsey is the complex process of reproduction. When Spawning, only 20–25% of 100% of fry are blue cichlids which are considered successful.

Pairing a couple is no less problematic. One of the parents must have a blue gene.

The features of the species also include:

It is recommended to separate the weaker electric blue fry from the total mass of young ones as early as possible. Otherwise, the strong fry will easily eat blue hybrid fish. Adult blue Dempsey cichlids have a peaceful, even meek disposition. The instinct of a fighter, which is characteristic of this fish, manifests itself if danger threatens the offspring.

Over time, the fish learns to recognize the owner, which indicates the presence of the rudiments of intellectual activity. Electric Blue Jack Dempsey fish is completely comfortable with light warm water, as it corresponds to the natural habitat.

Since the fish is from Central America, the aquarium water must meet the following requirements:

When the water temperature is below 23 degrees Celsius, the electric blue’s aggressiveness sharply increases, which manifests itself in the struggle for territory.

The situation stabilizes when the temperature rises to +26 degrees Celsius. When the heat level drops to +8 degrees Celsius, the blue Cichlasoma may die.

One sexually mature couple requires 150 liters of water. For growing large individuals, the sizes of which exceed the standard, the volume is increased to 200 liters. 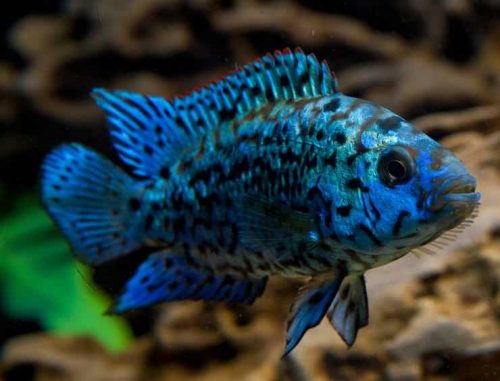 Once a week, one-third of the water needs to be replaced. Since Dempsey lives in the wetlands of water bodies in the wild, aquarium vegetation should be dense and fast-growing.

The most suitable are:

The Electric Blue Jack Dempsey constantly likes to delve into the ground, which harms the root system of plants. Therefore, it is recommended to plant algae in pots.

Fish need shelters that are created with the help of snags, grottoes, large stones. At the same time, you cannot overdo it. Dempsey needs enough living space for free movement.

For blue Dempsey, compatibility with fish of equal sizes is not a problem. Although blue Cichlasoma is calm, they remain predators.

If smaller fish become tankmates in the aquarium, then a blue Dempsey will be happy to arrange a hunting game for itself.

A pair of blue Cichlasomas feels best if the aquarium belongs only to them.

If the owner of the fish still decided to add variety to the fauna, then it is worth remembering the necessary amount of water and a sufficient number of shelters at the bottom. 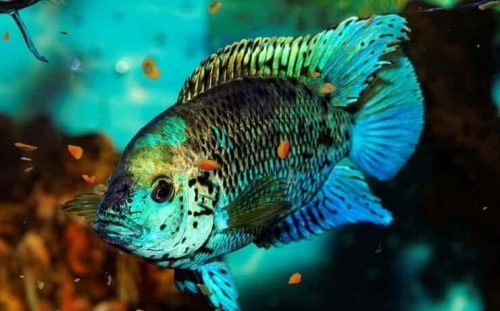 Dempsey is a voracious creature. The fish menu includes plant and animal feed. Unpretentious in food, Cichlasoma with an enviable appetite swallow insects, worms, as well as frozen and dry substrates.

Electric blue prefers a large bloodworm and a tubule. Shrimps and small fish give blue cichlids a special treat.

Dempsey should have 3-4 meals a day. When choosing ready-made feeds, it is recommended to pay attention to specially developed mixtures for cichlids.

Such mixtures are saturated with the necessary amount of vitamins, herbal supplements, and minerals.

When breeding Blue Dempsey, it is important to notice the signs of readiness for reproduction in the fish in time. In the male, the copulative organ becomes more visible, as does the ovipositor in the female.

At the beginning of the mating season, a pair of blue Cichlasomas is transplanted into a separate aquarium and the temperature of the aquatic environment is increased to +30 degrees Celsius.

Water should be fresher than usual. Therefore, it is recommended to replace it once every three days.

As soon as spawning begins, The female lays eggs on stones, decor elements, grottoes, plant leaves or pits in the ground.

The total number of eggs in treasures usually does not exceed 2 thousand. The hostility of the fish increases sharply.

They are ready to attack, protecting offspring. Aggression is so high that fry can suffer. Therefore, adults must be jailed or kept in a diff aquarium. Youngsters hatch on the 20th day from the start of spawning.

For the first days of life, the fry will have a light color. Up to one and a half months of age, young growth is extremely susceptible to disease.

As a preventive and improving measure, it is recommended to raise the water temperature to +32 degrees Celsius.

After a month, the temperature is reduced to the usual values ​​for blue Cichlasomas. The acid level of the water should be neutral with a hardness slightly above average.

Electric Dempsey attracts fans of aquarium flora with bright colors and peculiar behavior. And also blue Cichlasomas is of interest for breeding work.

Currently, only professionals are successful in breeding these fishes. Therefore, fish are expensive and rarely found in pet stores.