This variety is especially popular with beginner aquarium owners. Well-known this fish was made by its elegant coloring, unpretentiousness in leaving, and non-aggressive disposition. 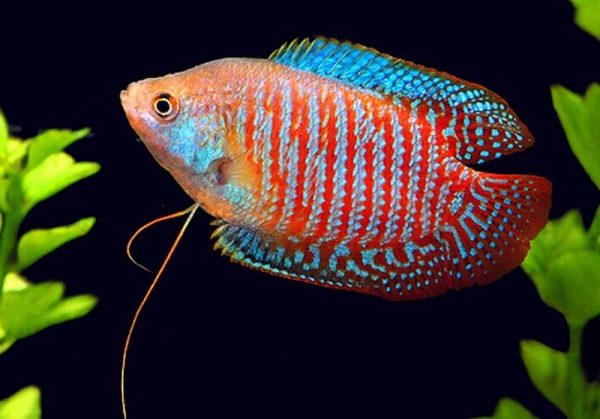 Dwarf Gourami is a small fish belonging to the suborder of labyrinth fish. In vivo distributed in the rivers of India. It prefers soft, well-sun-warmed water and dense thickets of water plants, in which it hides from enemies.

The aquarium variety of Dwarf Gourami fish became widely known in 1903 when its wholesale deliveries to the European market were made.

The sizes of these fish are from 5 to 6 cm. The body is streamlined, oval in shape, flattened from the sides. Males are larger than females and have a brighter color. The ends of the fins of the males are pointed, while the fins of the females are rounded. 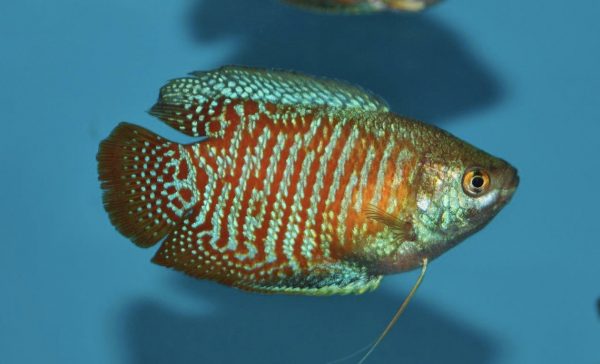 Dwarf Gouramis reach puberty at the age of 4-5 months. For breeding, the pair is isolated in separate vessels with a volume of at least 6 liters. The male builds a foamy nest on the surface of the water, where he collects eggs after spawning.

The female Dwarf Gourami is very prolific, it lays up to 600 eggs, after which it is planted, and the male looks after the eggs. In all varieties of Dwarf Gourami, males are most brightly colored, females, on the other hand, have a rather faded shade similar to the original natural form of fish color.

The compatibility of Dwarf Gourami in the aquarium with other fish is pretty good, provided that they are placed with medium-sized peaceful species Otherwise, the gouramis can suffer.

For these fish to feel comfortable in a home aquarium, they need the following conditions: 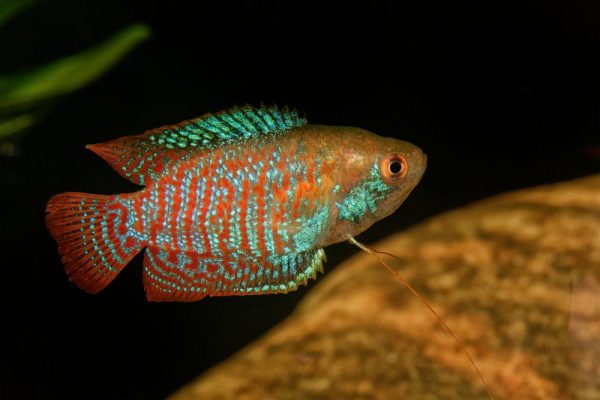 In a small aquarium, it is better to keep one male and several females, since males of this species can start to fight with each other. If the aquarium is large enough and densely planted with underwater plants, several males can be kept in it at the same time.

Dwarf gouramis are a peace-loving fish and they will not start a fight with any of their tank mates. You can keep dwarf gouramis with Neon Tetra, Molly Fish, Harlequin Rasbora, Zebrafish, Catfish, minnow fish, etc.

This species of fish belongs to omnivorous species. It is recommended to feed Dwarf Gourami with dry, frozen or live food.

These fish pick food on the surface, so dry cereal can become the basis of their diet. Food should be given with caution and only in such an amount that the fish eat without residue.

If the feed is not completely eaten then remove it from the aquarium as the food particles will rot after some time which will lead to spoilage of water in the aquarium and the development of pathogens that can subsequently harm the fish.

Foods such as daphnia, small crustaceans, Gammarus can be given as an addition to the main diet. 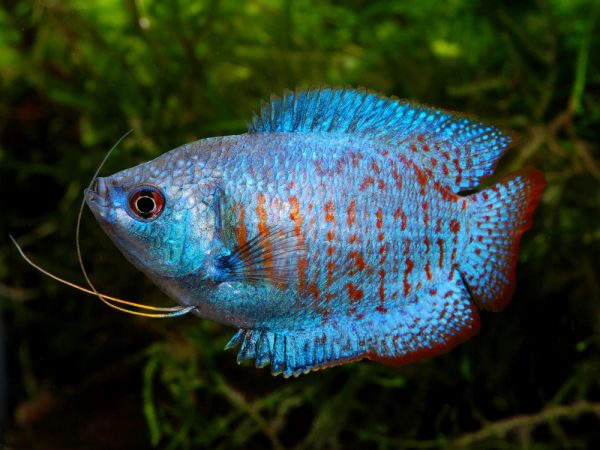 Please keep in mind that these fish are prone to overeating, so you need to carefully monitor the amount of food they eat and arrange a fasting day once a week for the fish.

The amount of feed can be determined empirically by setting food in small portions.

The frequency of meals depends on the age of the fish, as Fry need more frequent feeding than older individuals. It is enough to feed adult fish 1-2 times a day.

Before you buy a fish in a pet store or on the market, you need to watch it a bit and evaluate its appearance and agility.

Healthy individuals are quite active and have a bright color and shiny, tight-fitting scales. Please remember that the main protection of fish from diseases is their prevention.