Denison Barb is a large beautiful fish that is rarely found in amateur aquariums despite their rapidly growing popularity because there are many difficulties in breeding.

The homeland of the Denison Barb is a river in southern India. There they are under state protection because of the threat of extinction. It is forbidden to catch them, only reproduction on special farms and in aquariums is allowed. 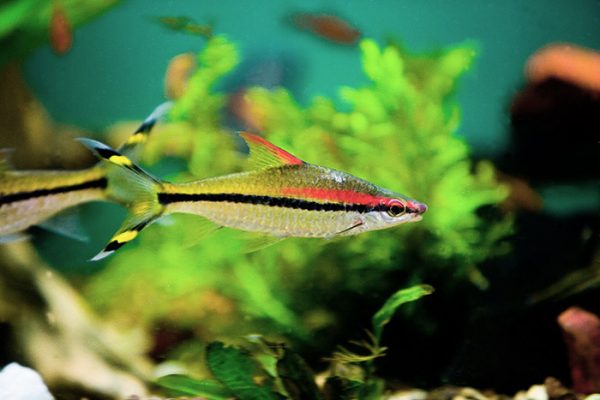 Denison Barb is a brightly colored fish and to keep them you need a large aquarium with a capacity of 200 liters or more.

They have many advantages :

Denison Barbs have a lanceolate elongated body 8–11 cm long. It has a golden-silver color with a black line along the entire length. A red strip stretches along with it from the nose to the dorsal fin.

The fin itself is painted in olive color with red front rays. There are black and yellow rounded spots at the ends of the V-shaped tail. Recently, A golden appearance of this fish has appeared, which has no black strip, only red. This color is still very rare.

After reaching puberty, a greenish streak appears on the head of the fish. Adult individuals also grow a mustache, with the help of which they find food. In appearance, males and females practically do not differ from each other. 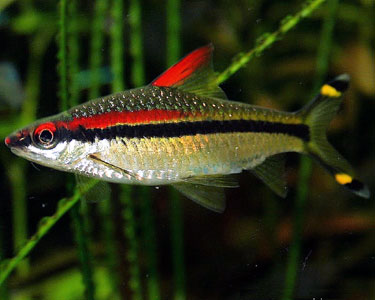 The females have a more rounded abdomen, especially noticeable during the period of gestation. Sometimes they have a less bright color.

The average life expectancy of Denison Barb is 4-5 years. Under good conditions, they live up to 8 years and grow up to 15 cm. Fish do not like loneliness and prefer to live in flocks.

Zoologists first described Denison Barbs in 1865. The fish got its name in honor of Madras Governor William Thomas Denison. Denison lives in the turbulent, oxygenated rivers and streams of southern India.

They live in large flocks and choose places with abundant vegetation and a rocky bottom. The modern Latin name for fish is Puntius denisonii. In India, these fishes are Popular as Ms. Kerala.

In 1997, Denison Barbs were presented at the International Aquarium Exhibition, where they won first place. After that, mass capture and export of fish from India began. Their population declined by more than half.

Due to almost industrial fishing, the barbs were almost on the verge of extinction. The decline in the number of fish in nature was also influenced by river pollution by industrial waste.

The Government of India has taken steps to protect barbs like, In certain periods, their fishing is prohibited. In Southeast Asia and Europe, fish are bred on special farms.

But Denison Barb is still listed in the Red Book as a species that is facing extinction.

Denison barb needs free space because of its fast and always moving around characteristic. These large fish live in schools and prefer to live in the middle and lower water layers, so the volume of the aquarium for them should be quite large.

For keeping a flock of Denison Barbs(7-10 fish), A container with a capacity of 200 liters of rectangular shape is needed.

Aquatic plants should be planted at the sidewalls of aquariums to prevent interference with the movement of the barbs. Barbs love to dig them up, so you need to give preference to plants with a powerful root system. Hornwort, echinodorus, wallisneria, Javanese moss, and other plants are suitable for them. 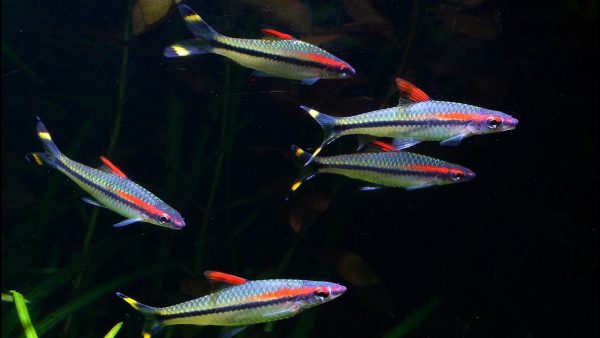 Coarse sand or small pebbles are required for the soil. You can use artificial soil, but you need to make sure that it does not emit harmful chemicals. To create hiding spots and shelters you can use driftwood, grottoes, large shells that should be installed on the sides.

The optimal water parameters for them are as follows :

To create conditions close to the natural habitat of barbs, intensive aeration and filtration of water is necessary. Filters must be equipped with powerful pumps to create a flow of water. Fish do not tolerate nitrites and nitrates in the aquatic environment, so a 30% weekly replacement of water is necessary.

As a rule, the Denison Barbs does not show aggression to other inhabitants of the aquarium. The exception is small fish, so it is better to keep barbs with creatures equal or larger.

Aggressive behavior is usually manifested in barbs, which are kept in the aquarium one at a time or in pairs. In fish living in a flock of six to seven individuals, the level of stress and aggression is low.

Denison gets along well with Sumatran barbs, Other tetra varieties, Congo, Rainbowfish, and catfish of various species.

These fish belong to the family of cyprinids, which are distinguished by omnivorous. They can be fed Daphnia, bloodworms, brine shrimp. They also love plant foods like lettuce, cucumbers, zucchini. Lettuce leaves can be washed, scalded, and lowered to the bottom of the aquarium, pressed with stones. Fish will be happy to peck them. Barmes is a suitable branded feed for medium and small cyprinids. It is better to choose products from well-known manufacturers such as Tetra, JBL, Sera, and others.

Denison barbs are not bred In amateur aquariums. These Fish are propagated on special farms, where they are stimulated with hormonal drugs. Only 2 cases of spawning of barbs in aquariums are known:

Denison Barbs are one of the beautiful fish, characterized by unpretentiousness and a peaceful character. While it is rare in our aquariums, but its popularity is growing, and over time it will surely take the place that it deserves.