Convict cichlid (Amatitlania nigrofasciata) also known as Zebra cichlid is a species of fish belonging to the Cichlidae family. They are called like this due to the contrasting black and white patterns on them.

Due to this striped pattern, they are also known as zebra cichlids. 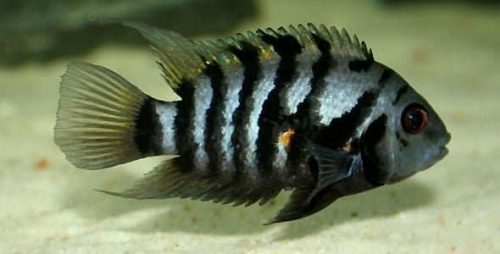 They are not only the third most popular species of cichlids but are also classified among the most populous species.

They breed frequently when provided a safe environment and a safe place to keep their eggs secured.

A baby convict cichlid might take about 6 months to mature, during which its parents are fiercely protective of them, to the point of being aggressive towards other fishes if needed.

The average life expectancy of the convict cichlid is up to 10 years.

The convict cichlids are colorfully striped. While they can be found in a huge range of colors and contrasts, female fish are rather brighter than the male of the species.

The female species are about 5 cm long, while the males measure up to 6.5 cm. Despite this, their weights are almost equal, about 33 to 37 grams.

The wild convict cichlids usually have vertical black stripes, on a greyish-blue body. These stripes are 8 to 9 in numbers.

They sometimes also develop fatty lumps on their foreheads with old age; these lumps seem to have no function.

The species of convict cichlids originate from Central America. The East coast habitat is from Guatemala to Costa Rica, while on the west coast they are found from Honduras to Panama.

The convict cichlids prefer flowing water to still and are usually found in rocky habitats, with fissures and clefts on the surface where they can hide for safety.

Their preferred pH is neutral but they can survive from 6.6 to 7.8 pH, while they are more adaptable and tolerant of cool temperatures. The convict cichlids are known to show more aggression than normal in warm climates.

Although not as populated as in Central America, they can also be found in Mexico, Japan, Columbia, and Australia.

The convict cichlid fish are omnivores. Ideally, the convict cichlids prey on small fish or insects like worms, or small plants like algae, and mainly crustaceans. However, they are highly adaptable.

The convict cichlids can even survive on flakes or dead microorganisms. They can feed on living, dead, meaty, and vegetable food.

Their ability to protrude their jaw helps them to prey on other fish and successfully compete for it.

Their adaptability to different kinds of food and environment makes them a popular aquarium fish.

However, their gut health can be negatively affected by anxiety.

The cichlid fish are known for being aggressive and territorial, and the convict cichlids are no different. Environmental factors play a great role in their changing behavior patterns.

Since they usually breed in higher temperatures, they tend to demonstrate territorial behavior, in order to protect their eggs.

Consequently, while keeping them in an aquarium, it is essential that they have enough room for themselves.

The convict cichlids have been widely researched and studied over their behavioral patterns.

The life cycle of convict cichlids

A convict cichlid egg takes about 72 hours post-fertilization to hatch. During this time, their parents have two major functions to perform; warding off intruders and providing enough oxygen to the eggs.

The parents keep predatory species away from their eggs, and constantly fan the eggs from time to time, using their fins; this is done to increase oxygen availability to the eggs during development.

The larvae born after hatching do not have completely developed fins, thus, another period of 72 hours is required for that.

After this, the fry develops its fins and is free to swim around with its school. However, like in other species, they too are required to return before the dark. This is to avoid being preyed upon.

It takes 4 to 6 months for a convict cichlid fish fry to reach sexual maturity. While the breeding period for female convict fish lasts about once per season, the fish in aquariums can breed after every 13 to 15 days, provided that they have suitable environmental conditions available.

Breeding convict cichlid fish is as easy as it gets! All you have to do is keep a male and female species together, and provide them with an adequate water supply and suitable temperature, they will rapidly multiply.

They are also not very particular about their partners; any male and female species of the convict cichlid fish would breed together to produce offspring.

In fact, they can produce 20 to 30 baby convict cichlid fish after about two to three weeks of breeding. It should be noted that the process of breeding is more effective when its environmental temperature is slightly raised. This is why beginners prefer to breed this over other species.

The breeding happens when the male convict cichlid courts one female for a considerable time, after which the female lays eggs wherever she finds suitable and safe. The fish of the convict cichlid family are highly monogamous.

Influence on other species

Although there is not a well-acclaimed conclusive prove for this, but it is hypothesized that the convict cichlids might have a negative impact on aquatic wildlife. This is due to them attacking and chasing away whoever they perceive as a threat to themselves or their eggs.

The convict cichlids have resulted in a decline of other species like Rhinichthys osculus. Studies have proved that they also caused the decline and reduced breeding of Crenichthys baileyi, in Nevada. It is of concern that Crenichthys baileyi is already an endangered species.

However, due to their aggression and being territorial, they are able to thrive in environments with restricted food supply and competition for habitat.

While the acclimatization of convict cichlids is probably the easiest, keeping them with other species of fish is hard. Due to being extremely territorial and aggressive, they are known to attack, bite, and chase the other species present in the tank.

The convict cichlid fish become specifically more aggressive during the breeding season, so it is best to keep them isolated from other types of fish.

However, some might keep them with fishes like tiger barb and mollies, which are quick and are able to speedily escape from attacks.

To acclimatize the convict cichlids, it is ideal to keep the surroundings as close to their natural habitat as possible.

Why are the convict cichlids a popular aquarium species?

There are several reasons for this. Here are some of them:-