Cockatoo Cichlid (Apistogramma cacatuoides) is a freshwater ray-finned fish from the Cichlidae family. This dwarf cichlid will become a real decoration of the aquarium as it is one of the brightest decorative fish from the South American continent.

Cockatoo Dwarf Cichlid is a peaceful fish, an excellent choice for general aquariums and the best part is, Its not very hard to take care of them 😉 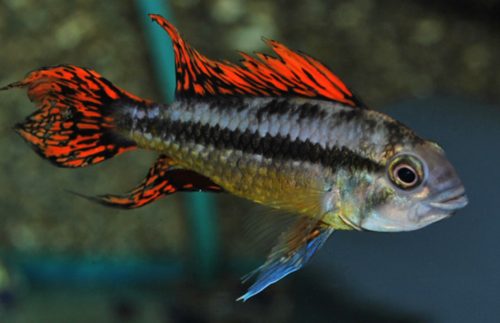 Some aquarium fish with their body shape, color, or other features vaguely resemble land animals. For this reason, various household names often “stick” to them, and we get names like parrotfish, elephant nose fish, etc.

In our article, we will tell you about a wonderful dwarf cichlid, which is named for its resemblance to a famous bird. Meet the cockatoo cichlid fish.

The dorsal fin of this cichlid strongly resembles the crest of a cockatoo parrot, Due to which, the fish got its name Cockatoo Cichlid.

It is almost impossible to confuse Apistogramma Cacatuoides with other dwarf cichlids. The fish has an elongated body up to 6-8 cm long. Males are larger than females, are brighter in color and have a characteristic crest of the dorsal fin.

All fins, except the pectorals, are large and pointed. They have large eyes and a small mouth with fleshy lips.

The Cockatoo Cichlid is characterized by an unusually variegated color. The main body color is gray or greenish; a dark stripe stretches from the eyes to the tail, which can be solid or discrete.

The belly of the fish is yellow-orange. 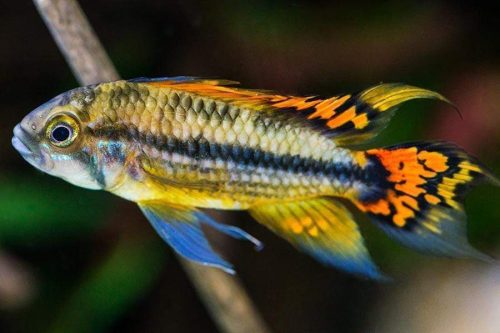 It is worth noting that through the efforts of breeders, many color variations of the cockatoo Apistogramma were obtained.

In the aquarium, The Cockatoo Cichlid lives for about 5-7 years.

The natural habitat of the Cockatoo Cichlid includes the water bodies of Peru, Colombia, Brazil, and Bolivia.

There is a large amount of falling decaying organic matter in such reservoirs and due to the high content of tannins, the water in the natural habitats of Apistogramma is colored brown.

The water is also very soft and acidic.

These Fish prefer shallow waters with a sandy bottom, in which they like to rummage, looking for food. Cockatoos hide from predators among the thickets of living plants and snags.

Cockatoo Cichlids live in groups of a dominant male and several females.

As in nature, the cockatoo Apistogramma is best kept in small harems of a male and several females. The recommended volume of the aquarium is from 60 liters.

It is best to lay sandy soil on the bottom.

A variety of stones, driftwood, grottoes are used as decorations. The creation of a large number of shelters is encouraged. 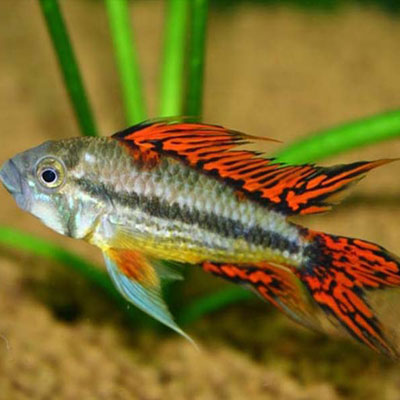 Cockatoo cichlids spend most of their time near the bottom as they like to slightly dig it up.

It is useful to plant live plants in the aquarium while leaving the fish a place to swim. Anubias, Echinodorus, Cryptocorynes, Wallisneria, mosses, and ferns are well suited for this.

It is recommended to make a slight twilight with the help of plants floating on the surface of the water: Riccia or Pistia.

Apistogramma Cacatuoides are sensitive to the content of nitrogenous compounds, so they can only be settled in aquariums with an established balance.

It is important to provide quality filtration and aeration. It will not damage the thermostat to maintain comfortable water temperature.

The cockatoo dwarf cichlid prefers soft and acidic water. Once a week, it is necessary to replace 20% of water with fresh water to prevent an increase in the concentration of toxic metabolic products.

For water change, You cant take water directly from your water supply system as this can be dangerous for your fish, because such water may contain compounds of chlorine and heavy metals.

Therefore, before adding fresh water to the aquarium, add Tetra AquaSafe conditioner to the bucket, which instantly makes the tap water suitable for fish life.

It is also beneficial to add a conditioner with natural peat extract Tetra ToruMin to the water.

The humic substances in its composition will slightly tint the water brown and will have a beneficial effect on the health and well-being of Apistogramma.

Due to its calm nature, the Cockatoo Dwarf Cichlid gets along well with the vast majority of aquarium fish.

Aggressive fishes such as Malawian cichlids or Oscar Fish will consider the cockatoo Apistogramma only as live food, so cohabitation with them is not recommended.

It is recommended to keep this fish in a group of one male and several females. Two males can only be housed together if the tank is large.

It should be noted that Apistogramma becomes more aggressive during spawning and caring for caviar.

The male guards his area of ​​the aquarium and drives away any stranger who dares to violate the boundaries of the territory.

This small cockatoo dwarf fish is a real predator. The basis of its diet in nature is made up of benthic insects, their larvae, small crustaceans, and worms.

The mouth of Cockatoo fish is small, so the food must be chosen proportionately. Flakes, chips, and granules work well.

If you keep cichlids in a shared aquarium, make sure they get food. There have been cases when more active neighbors pushed phlegmatic Apistogramma away from the food.

The following foods are perfect for a cockatoo dwarf cichlid:

Apistogramma cacatuoides are prone to overeating, so you need to feed them in small portions 2-3 times a day.

To breed Apistogramma cacatuoides at home, there is no need to create extraordinary conditions. If the fish feel comfortable in the aquarium, then the appearance of offspring will not take long.

Puberty occurs at the age of 8-10 months in the Apistogramma fish. By this time, Puberty differences begin to appear.

Males are larger than females, their color is brighter, and the rays on the caudal and dorsal fins are more elongated and sharp.

The closer to spawning, the more saturated the color becomes in males.

Since fish most often lives in harems, one male can fertilize several females at once. It is very important in this case that each female has her shelter. 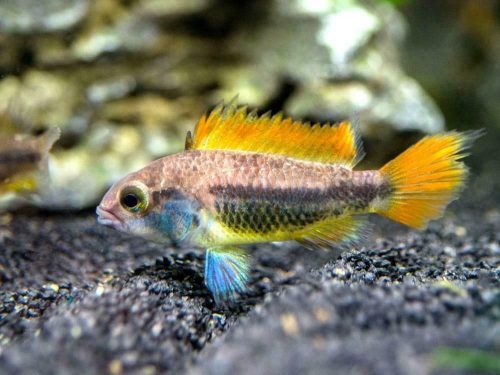 You can also breed Apistogramma in a separate spawning aquarium with a volume of 15 liters or more. A small layer of soil, several large-leaved plants, and a variety of shelters are laid in it.

Spawning can be stimulated by raising the temperature and frequent small water changes. Spawning is preceded by mating games: the male bends his body in front of the female and shows himself in full “fighting” color.

The female lays eggs in one of the shelters and one female can lay up to 80 eggs. Cockatoo Apistogramma has a well-developed parental instinct, and there is a separation of duties: the female looks after the eggs and the male protects the territory.

Sometimes, Male becomes overly aggressive and poses a threat to the offspring and the female. In such a situation, it is better to remove the male from the spawning tank.

After 2-3 days of fertilization, larvae appear and after 4-5 days, They begin to feed on their own.