Cherry Shrimp (Neocaridina heteropoda, or Red Cherry Shrimp) is the most popular representative of the crustaceans family, which is widely used in aquariums for decorative purposes. Cherry Shrimp are appreciated for their easy to care maintenance, high breeding rate, and the undoubted benefit that these small invertebrates bring like eating the rest of the food and algal fouling.

Cherry Shrimps are a good choice for beginner aquarists since they can exist in a wide range of water parameters, they are not as demanding on conditions as other types of shrimp. In addition, they can be settled even in a small tank. Cherry Shrimp grows up to 2.5-4 cm in length. Their body is translucent, elongated, flattened laterally, and includes two sections – cephalothorax and abdomen. Legs are located on the front segments of the abdomen.

The cephalothorax is protected by a carapace covering the gill cavities. The back of the cherry shrimp is usually pinkish-red in color, claws and paws are covered with small bright spots that form a characteristic marble pattern. Whiskers are white or pink.

The general coloration of the body of cherry shrimp is of varying intensity and extremely variable. Their pigment cells can instantly expand or contract, and the shrimp can instantly turn pale or, conversely, become very bright. This phenomenon depends on a number of factors like nutrition, environmental parameters, vegetation, neighbors in the aquarium, and even on age.

On the dark ground, Cherry Shrimps also darken and become more saturated in color, in case of stress (for example, when starting up in a new aquarium) they can practically discolor.

Males and females of Cherry Shrimp differ in size like females are usually larger, thicker, and brighter. The main distinguishing feature is the “saddle” on the back of the females – a yellowish spot, which is the ovaries in which the caviar develops. 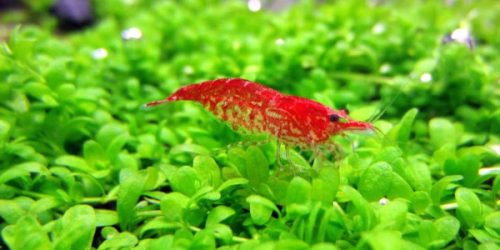 The males are quite agile, smaller, and weaker colored. They lack a saddle in which females hatch eggs. Females, on the contrary, are quite calm and imposing, their abdominal line is rounded, after reaching maturity they have a rich red color.

As the shrimp grows, like other crustaceans, They also molt and discard the old chitinous cover. Sometimes you can also see an empty shell of a shrimp in your aquarium. It is not necessary to clean it as it can serve as an additional source of food for the shrimp itself.

In nature, representatives of this species live in slow-flowing rivers, streams, and lakes, which are usually discreet in color, which helps them hide from predators. After all, a bright color attracts attention and creates a threat to be eaten. The species includes several subspecies – two of them live in the Chinese provinces of Zhejiang, Anhui, Henan.

The remaining representatives of neocaridina are found in freshwater bodies of Taiwan and Korea, known since 1938. Ordinary transparent neocaridinas were the first to gain popularity and spread among aquarists, later replaced by brighter shrimps called Cherry Shrimp. This form was obtained as a result of selection work on Cherry Shrimps. The creators tried to achieve the absence of a translucent layer on the shell of the shrimp and get 100% staining, which ultimately turned out for them.

It is difficult to remove your eyes from such a rich red color. In addition, the red fire shrimp turned out to be slightly larger than its ancestor. Problems with the maintenance and breeding of these crustaceans usually do not arise, however, there are some difficulties in maintaining a clean line.

Extremely attractive shrimp with a lemon yellow color. It was bred by Japanese breeders in 2006. In care and maintenance, it is no different from ordinary shrimp cherries, it reproduces well at home.

Able to live in an aquarium for up to two years. With age, the color darkens a little and becomes orange.

As already noted, Cherry Shrimps are very unpretentious to the parameters of the water and adapt well to them. Due to their small size, they are suitable for keeping even in miniature, nano-aquariums with a volume of 5 liters or more, they are common inhabitants of aquascapes.

For example, in a volume of about 5-10 liters, up to 10 individuals can be settled, however, with a sharp change in the living conditions of the shrimp, they experience stress, so it is better to choose an aquarium of 30-50 liters for them and place them more there.

Usually, it is not possible to calculate the exact number of cherry shrimps in the aquarium, since they breed very fast.

It is better to use fine fraction soil of 0.5 – 1.5 mm in your aquarium. Filtration and aeration should be organized. It is advised to put driftwood in the aquarium and cover it with moss as wood serves as food for the newly hatched shrimp, and moss – as an additional shelter.

Despite their good adaptability, Cherry Shrimps are sensitive to the content of nitrates, ammonia, and copper compounds in the water; it is not recommended to keep them in a fresh aquarium. Copper-based fish preparations and anti-snail products can harm this crustacean. Another danger for shrimp is planaria. In an aquarium with Cherry Shrimps, it is imperative to plant live plants, which will serve as a shelter and resting place for them, especially during molting, when the cherry shrimps are most vulnerable.

These animals can often be seen sitting in the thickets of plants, they especially like different types of mosses (Javanese moss, Christmas moss, etc.), cladophore, ferns. Among the small leaves of these plants, shrimp find for themselves additional food in the form of algae and leftover foods.

Cherry shrimps are absolutely peace-loving creatures and they spend most of their time in search of food, graze on plants, soil, stones and glass of the aquarium, quickly sorting through their paws. They must be kept in a group. You can settle shrimp in a species aquarium, where they will feel as comfortable as possible.

However, these crustaceans get along well with small, calm, and non-aggressive fish, such as guppies, mollies, neon tetra, zebrafish, otocinclus catfish, and galaxy rasbora, etc. They are still quite vulnerable, so even small fish can harm them, in addition, in the vicinity of active and motile fish, cherry shrimps experience constant stress, often hide and may turn pale. 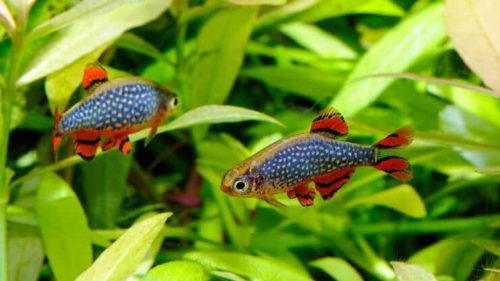 It is not recommended to keep them with any dwarf cichlids or predatory fish. For example, angelfish or loaches can quickly destroy all cherries. Predatory assassin snails can also catch and eat the small cherry.

Young individuals are very likely to be eaten in the general aquarium, which is partly offset by the high fecundity of shrimp, as well as their ability to hide in soil and plants. Therefore, for the comfortable life of these arthropods, dense vegetation is extremely necessary.

Typically, the life expectancy of cherry shrimp in the aquarium is a year and a half, but they multiply rapidly and maintain their population.

Cherry shrimps are picky when it’s about eating and almost omnivorous. If they live in a common aquarium, they usually have enough food leftovers that fish eat. Sometimes It is necessary to feed them specialized dry food for crustaceans.

In some cases, shrimp can eat food even faster than fish get to it, especially if it is tablets or flakes for catfish and other bottom species.

Sometimes cherry shrimp are fed with vegetables, slices of bananas, lettuce, and various trees – oak, hazel, etc. In this case, you need to carefully monitor the cleanliness of the aquarium and remove uneaten remains.

They must be fed once a day in such a quantity that all the food was eaten in no more than 2-3 hours.

Cherry Shrimps are also excellent cleaners, they eat algae in the aquarium, detritus, dead fish, and other waste.

Breeding cherry shrimp is a relatively simple process and does not require the creation of any special conditions. Shortly after molting, the females are ready to mate and lay eggs. Distinguishing between male and female is not too difficult.

Females ready for spawning release pheromones into the water, which attracts males. After they find each other, a kind of mating dance begins – the individuals wave against each other with all paws and antennas.

Finally, the male wraps her legs around the female, turns him on his back, and hangs a sperm pack near the genital opening.

At the end of the mating, the female ceases to secrete pheromones, and the males lose interest in them. Next, the laying of eggs begins.

Leaving the female’s body, the eggs successively pass through the sperm packet left by the male and are fertilized. After this, the fertilized yellow caviar is fixed on the abdominal legs with the help of special cords.

The female cherry shrimp is a very scrupulous parent: she regularly cares for caviar, cleans mud particles, and removes unfertilized and spoiled eggs. With the help of legs around the eggs, a constant flow of water is created to provide eggs with oxygen.

After 2-3 weeks, black eyes are found in the eggs. Small shrimps about 1 mm in size immediately appear from the eggs, which are very difficult to see in the aquarium, since they usually hide in the ground and are almost transparent.

On average, a female gives birth to 20-30 young shrimps. It is not necessary to feed newborn babies, they themselves feed on plankton and bacterial film. As they grow older, you can switch to specialized dry feed.