Bumblebee cichlid (Pseudotropheus crabro) is also known as the bumblebee mouthbrooder and hornet cichlid. It is considered a very attractive breed of fish and has been given this name because of its appearance.

When the bumblebee cichlid is juvenile, it has a black bumblebee-like pattern and has stripes of yellow over it. It is known to change its colors very quickly as it matures.

The lifespan of the bumblebee cichlid can exceed 10 years if the fish is given ideal care. 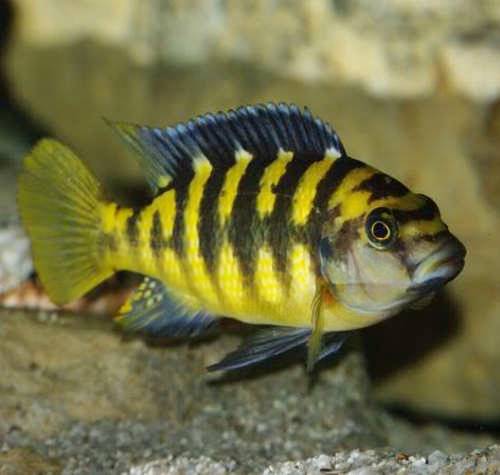 It starts from a complete blackfish and turns into a complete yellow fish with solid black bars over it.

This pattern highlights its abilities to be known as a cleaner as it can pick off parasites from the skin of large, cave-dwelling catfish.

However, it even turns black when the catfish are spawning and even eats the newly laid eggs of the catfish.

The males turn almost all black when they are breeding, and some males are even said to flaunt a bright blue color around their flank areas. The fins of the male are all dark blue.

The females have a gold body with zigzag dark brown lines that fade into the gold around the belly area and a horizontal bar that runs all around to the tail. Both the males and females can change their color to a dark, solid color.

Cichlids are said to have a common feature with saltwater fish such as parrotfish and wrasses – a set of teeth in the throat that coexists with the regular teeth. 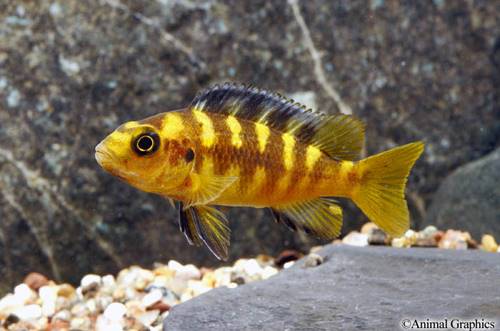 The fins of the bumblebee cichlid are designed to help it swim smoothly through the water and provide precise positions and movements.

The cichlids are recorded to have one nostril on each side, whereas all other fish are said to have 2 nostrils each.

The way the bumblebee cichlids smell water is by sucking in the water through their nostrils and expelling it right out after they have smelt it for a long or short period.

This depends on what the bumblebee cichlid wants to smell in the water. This is the reason why cichlids are said to be closely related to the damselfish breed.

The bumblebee cichlids are originally found in Lake Malawi around the areas of Nkata Bay, Likoma, Mbenji, and West Reef.

They are listed as Least Concern on the IUCN Red List. There are no major threats to the species due to which they are widely found throughout Lake Malawi. 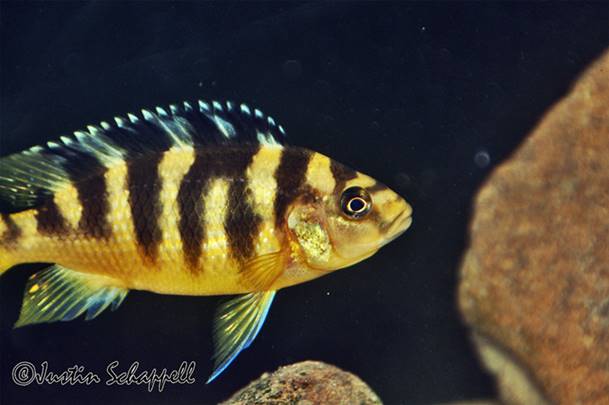 These fish are said to live in various habitats, but they mainly prefer to live in sandy and rocky substrates surrounded by large boulders. They can also be found in large quantities in the interior of caves.

The bumblebee cichlids have a wide variety of food preferences in the wild, which include fish eggs, larvae, and benthic crustaceans.

As for the aquarium setup for the bumblebee cichlid, the minimum tank size should be 50 gallons for a tank holding a single fish.

If multiple fish are being housed in a tank alongside it, a tank of about 100 gallons or more is ideal, which should measure at least 5 feet in length.

The bumblebee cichlids are said to get along perfectly with other freshwater or brackish freshwater fish, but they require strong water movement in the tank.

Since the fish are relatively large, they require very frequent water changes and an efficient water filtration system. 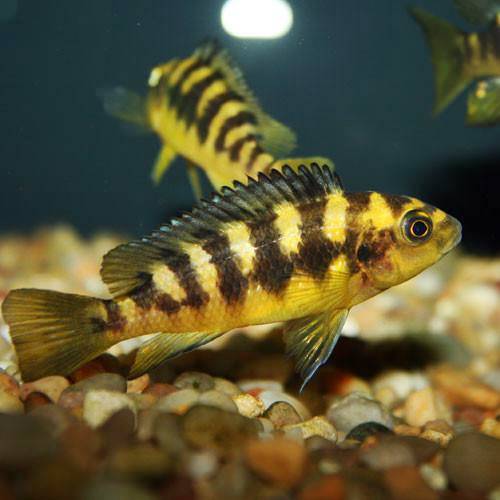 The inside of the tank should have gravel or coarse bed along with a variety of rocks and multiple hiding places such as pipes and caves along with bogwood.

The hiding places should be laid out for the spawning or sub-dominant fish.

If crushed coral is added to the tank, it can help keep the pH value of the water high. Plus, the crushed coral always dissolves faster than other salts.

However, you need to carefully monitor that the pH level does not go too high as then, it would lead to ammonia being more lethal in the tank and the water changes of the tank would be even more frequent.

The care of the aquarium would mainly depend on the bioload present. 20 to 40 percent of water changes are advised on a weekly level as the bumblebee cichlid would expire in poor water conditions.

The bumblebee cichlids are categorized as omnivorous fish and are known for their voracious appetite. They feed on a large variety of food, which may vary between the wild and in captivity. The list of foods includes fry fish, larvae, and parasites in the wild. However, in the aquarium, they feed on pellets, spirulina, prepared cichlid food, and high-quality flakes.

These foods are widely available in supermarkets or any stores that sell food for fish kept in aquariums.

These fish need very high protein content in their food because of their natural diet. They also need vegetable matter in their diet as it provides fiber, which keeps the bumblebee cichlid free from diseases that affect its intestinal tract.

Keeping track of the diet of the bumblebee cichlid is extremely crucial for the care of the fish.

If you feed it too much, the water quality of the tank would deteriorate very quickly due to the waste released after consumption.

Thus, it is strictly advised not to overfeed the bumblebee cichlid and not to house these fish with other species that consume any sort of meat such as beef heart or the meat of any other mammal.

Such fish would include another genus of cichlids. This is recommended because these foods can cause the death of the bumblebee cichlid.

As with most other breeds of cichlids, the bumblebee cichlids are said to benefit from any supplements or vitamins that are added to their diet.

As far as the frequency of the feeding is concerned, it is advised to feed the bumblebee cichlid several times in a day in small portions.

You need to make sure that one feeding period does not encompass more than 3 minutes or else you run the risk of overfeeding. 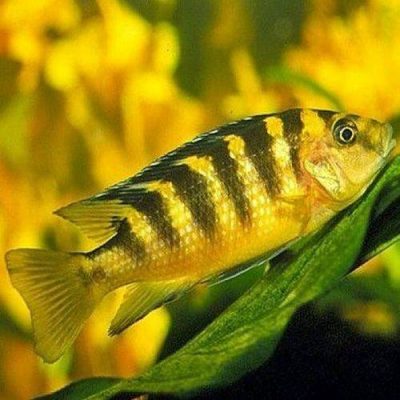 Whatever the bumblebee cichlid can consume within those three minutes should be enough. This routine should be followed rather than a large feeding every single day.

If proper care is not given to the bumblebee cichlid when it comes to feeding, it can expire very easily.

The bumblebee cichlids need a harem and are easy to breed.

However, if tank breeding is started with a group of very young juveniles, the sub-dominant males would need to be removed, or else they would kill any rival in the tank for mating.

The female would lay about 20-60 eggs and take them in her mouth immediately. In a period of about 17 to 20 days at 82 degrees Fahrenheit, the eggs are developed.

It is to be kept in mind that the male is relentless at disturbing the female to the extent that she may eat her eggs. Hence, it may be helpful to construct the male’s territory such that he can’t see the female.

The fry is said to grow very quickly if given the correct diet.

The females guard the eggs and as they grow, they can be fed foods such as crushed flakes, brine shrimp, and finely powdered dry foods. If the fish have an easy hiding place, the young fry is easily able to hide and survive.

The bumblebee cichlids are aggressive and, thus, are only compatible with the same species. Ideally, you should have a group of 1 male with 6 females in a 100-gallon tank. 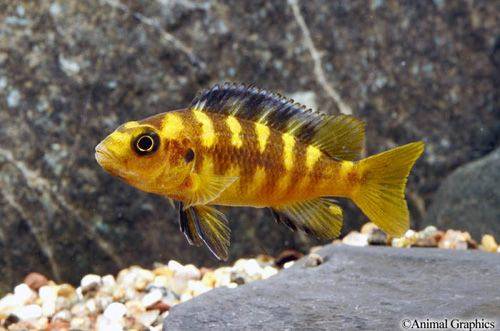 The bumblebee cichlids are a threat to peaceful fish and safe for other aggressive fish, so their tankmates must be chosen accordingly.

However, the amount of copper being put in the tank is to be carefully monitored, which can be read from the back of the copper packaging.

The exact amount that has been suggested by the manufacturer should be added.

Other than that, the bumblebee cichlid is prone to parasitic (such as worms and protozoa), fungal and bacterial infections.