Bristlenose Pleco plays the role of cleaner in the aquarium, picking up the remains of feed from the bottom and cleaning the aquarium walls with algae. Any experienced fish keeper must keep this fish.

Bristlenose Pleco is a well-known representative of the Pleco Fish Family. It is also known as Ancistrus Cirrhosus. Due to their compact size and ease of keeping these fish are loved and adored by hobby aquarists.

The size of the Bristlenose Pleco in the aquarium does not exceed 15 cm in length, while the females grow larger than the males. In males, as they mature, a peculiar mustache is formed, which can be up to 2 cm long.

These fish have a flat head and the same front part of the body. The sides are covered with bone plate growths. The dorsal fin is high, there are a pair of pectoral and ventral fins. 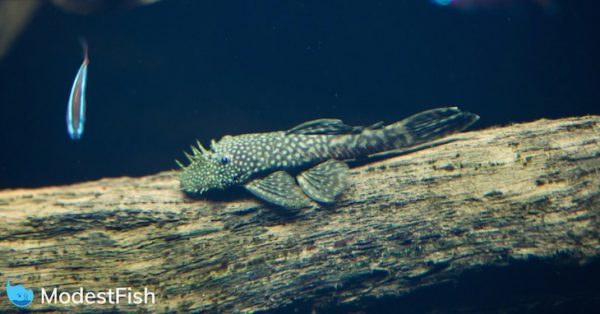 The mouth is round, there are horn-shaped suction cups on the lips that give the Bristlenose Pleco a funny and slightly awesome look. They can hold it on the rocky bottom of fast-flowing rivers.

The oral suction cup resembles a grater in structure and serves to scrape algae from plants and other objects. 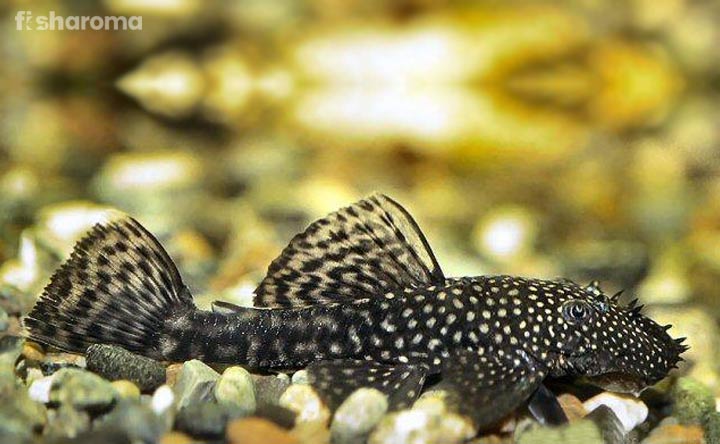 The usual dark variety is sometimes called Blue Ancistrus. In nature, these fish prefer streams and fast rivers of South America, but they can be found in small swamps, ditches of the same area.

When kept in an aquarium, they can live up to 7 years, if they are provided with suitable conditions.

Some believe that since these fish are small, they need a very small aquarium, but this is not so. Bristlenose Plecos are active at night, and during the day they prefer to hide in the shelter.

Better if their home will be a volume of 80 liters. The exception is red pleco, they need only a 50-liter aquarium for one pair. A mixture of sand and fine gravel is ideal as soil.

The aquarium for these fish must be equipped with a powerful filter and aeration. As shelters, you can provide driftwood, other elements of aqua design.

Plecos are considered non-aggressive, nevertheless, fights are possible between males, therefore catfish need to have a place where they can hide. 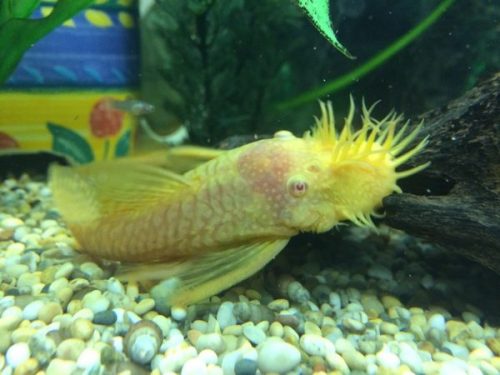 It’s great if the snag is natural, not ceramic. Wood is a source of pulp for Bristlenose Pleco, which improves their digestion.

Considering that Plecos love to dig up the soil, it is better to put plants in pots, but you should not completely abandon them. Fish can use greens as an additive to the main feed.

Besides, living plants produce oxygen in the aquarium and participate in the formation of the correct balance of the aqua system, absorbing nitrates. Lighting does not play any role due to the night lifestyle.

Bristlenose Pleco loves clean aquariums. Water changes should be done every week by changing 1/5 of the total volume of water at a time. At the same time, it is necessary to siphon the soil with a special device, cleaning it of excrement.

Once a year, it is advised to do a General cleaning in the aquarium with a complete washing of the soil, decorations, and plants.

Bristlenose Pleco themselves are peace-loving fish, but they can become victims of aggressive tank mates. It is better not to keep them with cichlids and other large fish.  You should not keep more than one male in the same aquarium as they might start fighting for territory. You can keep Bristlenose Pleco with Guppy Fish, Tiger Barb, Neon Tetras,  Angelfish, and other catfish species. You can also keep them with Gourami, Molly Fish, Loaches, etc.

Due to the special structure of its mouth, Bristlenose Pleco can stick to scaleless fish and cause harm to their skin. Intraspecific aggression will appear only in a small-sized aquarium with an insufficient number of hiding shelters.

Bristlenose Pleco is fed in the evening before turning off the lights. Given that these are bottom fish, You will have to buy special pills for their nutrition. The food sinks to the bottom, the Bristlenose Pleco finds it and eats it.

Although this catfish prefers plant foods, its diet should include 20% protein. It can be a frozen bloodworm or corvette. The larvae are pre-thawed and thrown in small portions into the aquarium.

As a plant food, catfish can be offered slices of zucchini and cucumbers, broccoli, lettuce. Slices of carrots or pumpkins are first scalded with boiling water to make them softer. 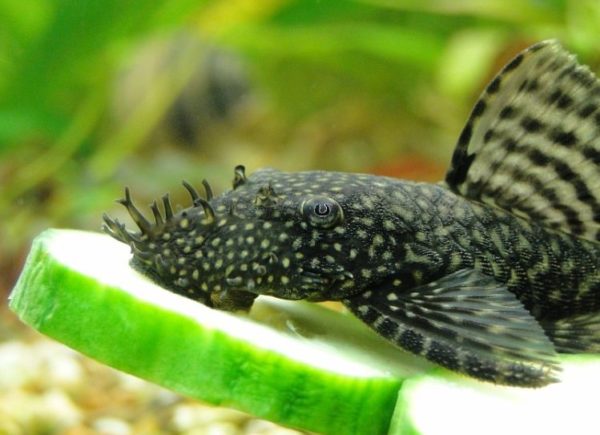 The remains of uneaten vegetables from the aquarium must be removed the next day so that they do not spoil the water. Aquarists recommend piercing a cucumber or zucchini with a fork and in this form lower it to the bottom so that the vegetable is held there.

Bristlenose Pleco spawning should occur in a separate aquarium. Bristlenose Pleco like some other fish species has an interesting feature. In the absence of a male, one of the females can change their gender to male to be able to reproduce offspring.

Sometimes Bristlenose Pleco lay eggs in the general Aquarium if the area allows and conditions are suitable. For this, the female uses a high stump or snag. In spawning, they install a specially designed tube for this.

In the natural habitat, the beginning of the rainy season is a signal for spawning for plecos. In an aquarium, such conditions can be simulated by enhanced aeration and more frequent water changes. When a couple chooses a place for spawning, the male cleans it with his suction cup and the female begins to spawn.

Each of the eggs has a diameter of about 2-3 mm and bright orange color. The male fertilizes the masonry and begins to care for it. After spawning, the female should be transferred from the spawning tank to the general aquarium. 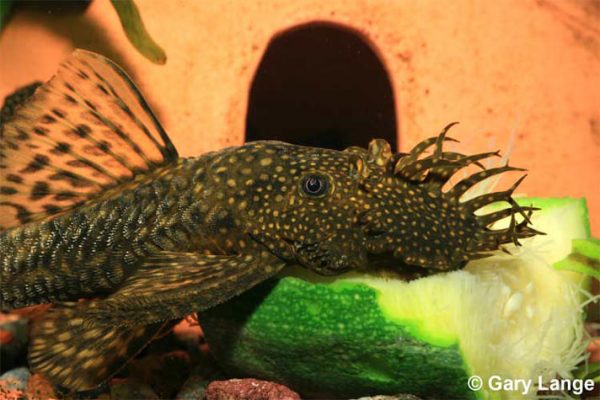 The role of the male is reduced to protecting the masonry and fanning the eggs with fins. Thus, the catfish father enhances aeration to provide eggs with a large amount of oxygen.

The fry hatch after 5-6 days and then hide in a shelter. When they begin to swim out from there, You should begin feeding them and remove the male from the spawning ground.

The young are fed with special food for fry three times a day. To keep the water clean, daily replacements of 1/5 of the volume of water are necessary. In such conditions, small fish will begin to grow and develop rapidly.