Boesemani Rainbowfish (Melanotaenia boesemani) or Boeseman’s Rainbowfish is a freshwater ray-finned fish from the Melanotaeniidae family. The fish is named after the researcher Dr. Marinus Boeseman, who discovered it during the 1954 expedition.

This species was rediscovered in 1980 after almost 26 years and also received a scientific description. They are also called Bicolor Rainbow fish and Boesemani Rainbowfish.

The fauna island territories of Indonesia have given us a lot of attractive aquarium fish species, among which highlights the “Boesemani Rainbowfish”.

Bosemani Rainbowfish is a peaceful species. They are lively and easy to keep in an aquarium. Even though the species is quite new in the aquarium industry, the popularity of this fish is very high. Boesemani Rainbowfish is a large (more than 10 cm) fish, which is distinguished by a calm attitude towards their tank mates and living plants. Their bright color and “fussiness” are immediately evident.

Boesemani Rainbowfish fry looks gray and inconspicuous, but it is worth keeping them in a spacious aquarium with suitable water parameters, feeding them with quality food, and they turn into magnificent inhabitants.

Unfortunately, due to uncontrolled fishing and destruction of natural habitats, the species was on the verge of extinction and is listed in the International Red Book.

The Indonesian government is taking steps to protect the natural populations of Boesemani rainbowfish.

The Boesemani Rainbowfish has an elongated high oval body, compressed from the sides. In males, a well-defined “keel” is noticeable under the head.

The head is narrow, with a terminal mouth and large eyes. The usual length of the male is 10-12 cm, and the female is about 8 cm. The coloration of Boesemani Rainbowfish is interesting: the front part of the body is blue, and the back is yellow-orange. Males have a blue color on their head and females flash silver color fins against a backdrop of rocks and plants.

In the place where the colors change into each other, you can see several transverse dark stripes.

The long unpaired fins are orange with white or greenish edging. Paired pelvic and pectoral fins are transparent or with a slight bluish sheen.

The color of this Rainbowfish is a good indicator of the condition of the aquarium. When conditions deteriorate, the fish become faded. Also, age, health, water quality, and many other factors may impact their colors as well.

The life expectancy of Boesemani Rainbowfish in home aquariums is 6-8 years.

Boesemani Rainbowfish are found in Asia and specifically in the waters and tributaries of Lakes Ayamaru, Hain, and Aitinjo. They dwell in swampy shallow areas that are densely vegetated and feed on small crustaceans, insects, etc.

Over time, the population of this species has declined due to human activity and introduction of invasive species.

To keep Boesemani Rainbowfish, an aquarium of at least 100 liters is required, ideally, it should be extended in length.

The representatives of this species are unusually mobile, they need space for a comfortable life. For the same reason, the aquarium will need a lid to prevent the rainbowfish from accidentally jumping out. 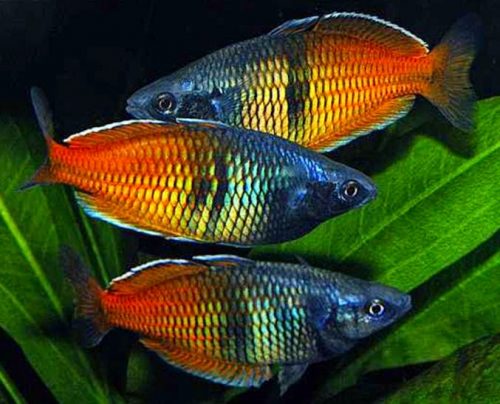 You can keep almost any type of plant: Echinodorus, Cryptocoryne, Anubias, Cabomba, etc.

At the same time, the current should not be strong, because the rainbowfish are inhabitants of mostly stagnant bodies of water. Adequate aeration is equally important.

They are active fishes and need plenty of water to swim freely. You can protect the fishes by setting up tall plants and other structures but make sure there is enough space for swimming. They are also jumpers so be sure the tank has a secure cover. It is very important to change at least 20% of the volume from the aquarium.

Dissolved substances such as chlorine or heavy metals can kill fish or lower their immunity. Many people use sedimentation of water, but this only helps to get rid of chlorine, but its compounds from the water will not disappear anywhere. Therefore, it is necessary to keep a watch on the purity of water. 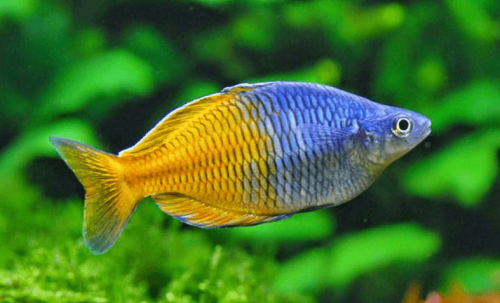 Tetra AquaSafe Conditioner is the best way to instantly make the water livable for your fish. It not only instantly binds chlorine and heavy metals, but also enriches the water with useful vitamins and microelements.

It is worth noting that Boesmani Rainbowfish prefer more alkaline and hard water. When water conditions are not at the right levels this fish will develop columnaris, so water and temperature must be well regulated.

Despite their rather large size, Boesemani Rainbowfish are peace-loving species. The ratio of males to females is very important to maintain harmony among them. Although you can always keep single sex schools, you might witness a significant coloration if both genders are in the tank. Males will exhibit their best colors as they vie for attention from females. They go well with other types of ornamental fish, with only one caveat – the tank mates should not be very slow.

The Rainbowfish are active and with their constant movement, They can drive some fishes in a state of stress and not to mention the fact that timid tankmates may simply not get food. For example, Pseudomugilids and Threadfin Rainbows are docile and sometimes shy, so tank mates should be chosen carefully. You can mix them with other playful but good natured fish for best results. 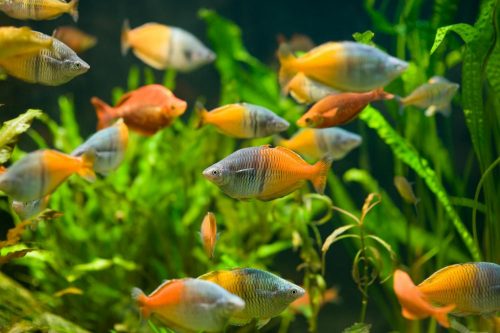 Rainbowfish are omnivores and need both plant matter and meat-based foods in their diet. Their natural diet is varied and include insects and their larvae, small crustaceans, and pieces of plants, Aqueon tropical flakes, color Flakes, Spirulina Flakes and Betta Treat

At home, it is best to feed the fish with high-quality dry food, which can provide them with the full range of nutrients and will not become a potential source of infection, unlike live and frozen food.

Rainbowfish prefer to feed in the upper and middle water so TetraMin and Tetra Phyll flakes or pellets work well.

Don’t forget to pamper your rainbows with natural treats in Tetra FreshDelica Nutritional Jelly. Artemia silt bloodworms will surely please your fish. They might sometimes need a proportion of frozen and even live foods to maintain optimum health and color. For best results, you can keep changing your fishes’ diet daily and feed only what they can consume in under 2 minutes, once or twice a day.

At home, you can easily get the offspring of Boesemani Rainbowfish. They are egg scatterers but provide no parental care once the eggs are laid. Only healthy adult Rainbow fishes must be introduced and should be conditioned with live foods and plant based foods.

It is possible to distinguish a female from a male-only after the onset of puberty – at the age of 10 months.

Boesemani Rainbowfish Males have a taller body and are brighter in color.

It is best to separate and feed abundantly some time before spawning. For breeding, you need an aquarium of 40 liters or more, in which you should install a small filter and plant small-leaved plants.

As swollen belly on the female body indicates the right time for spawning. Next, they are planted with the male fish in a separate spawning container.

Temperature can be up to 27-29 ° C which can stimulate fish. Spawning in Rainbowfish is rather long: every day the female lays a small portion of eggs and sticks it to plant leaves.leaves. The male immediately fertilizes the eggs.

The Fry are born after a period of 7-12 days of incubation. After this, they quickly start self-feeding. Feed the fry little by little and remove the debris with a siphon. You may feed them infusoria or a liquid fry food until they are able to eat small live foods in sometime.

The fry grow slowly and require clean water during the entire process which may be a little challenging. They can be kept in a common aquarium once they grow to a length of 3-4 cm.