Blue dolphin cichlid (Cyrtocara Moorii) also known as Blue Moorii which was previously known as the Haplochromis moorii is categorized as an exotic breed of cichlid. It grows to a good size and is stocky and elongated.

It also has a pointed snout, which looks similar to that of a dolphin, which is where its name is derived from. It is also referred to as the Malawi blue dolphin.

It can grow to a length of 10 inches, and its lifespan is closer to 10 years if its needs are taken care of. 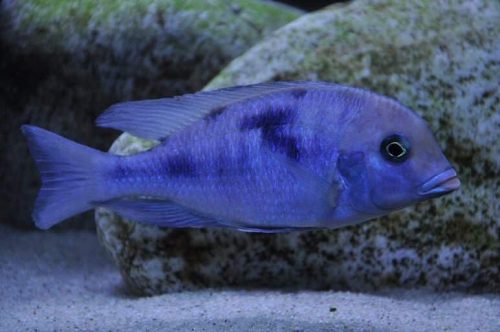 It is predominantly blue. It may have various black markings on its fins or back. This is dependent on its place of origin.

The grown-up versions of the fish have lumps on their heads. These forehead lumps are referred to as cranial bumps.

A common feature among these fish is the presence of teeth in the throat. These teeth are pharyngeal and well-developed. Other saltwater fish such as parrotfish and wrasses also have this feature.

A spiny ray is usually present in the fins and dorsal region. These are vital for fending off predators in the wild. Their fins provide them with incredible movement while swimming.

A nostril is present on both sides of the fish. This is different from other types of fish who usually have two nostrils on both sides. 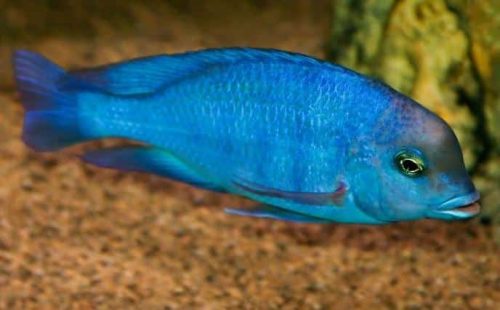 It sucks in water and throws it out to smell its surroundings. This can be done for short or even longer periods. It usually depends on how much area the fish needs to smell.

Various other fish such as cichlids and damselfish have also been observed with this habit. Both of them are closely related to the blue dolphin cichlid. 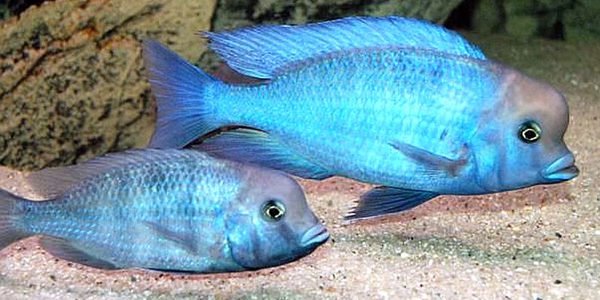 They are mostly caught in the wild and have been commercially traded for aquariums since 1968. The fish are mainly found around sandy coastal areas, where the depths vary from three to fifteen meters.

For keeping the blue dolphin cichlid in captivity, the tank size should be a minimum of 75 gallons in volume and at least 5 feet in length. It requires very strong filtration systems with adequate water movements.

As for the salinity, the fish do fine in both freshwater and brackish freshwaters. Although the natural habitat of the blue dolphin cichlid does have saltwater, it is tolerant of it.

It is important to monitor the water quality of the tank as poor-quality water may ruin the eyes of the blue dolphin cichlid.

The substrate type most suitable for these fish is sandy, as it makes them feel the most at home in waters where the temperature is between 22.8 and 27.8 °C. The pH levels should be maintained at neutral, ideally at 7.2-8.8. 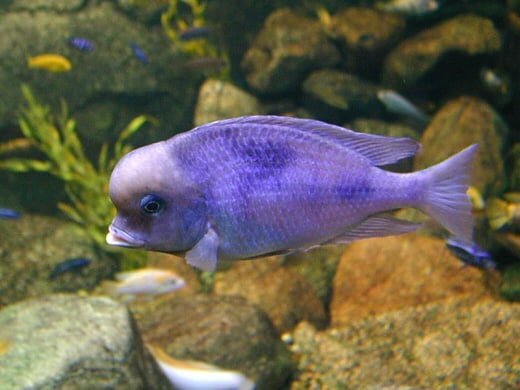 It is to be noted that the blue dolphin cichlids are considered good choices for experienced cichlid keepers. The tank keeper would need a good-sized aquarium, and the aquarist would be required to frequently change the water.

The blue dolphin cichlid is considered a peaceful cichlid and if given the proper setup, the fish would grow despite not being a typical community fish.

It requires clean water. Its health will deteriorate significantly in the presence of poor water conditions. Poor water especially has an effect on this fish’s eyes, which would be ruined. Hence, weekly water changes are essential to their survival.

Since Lake Malawi is where the fish are found mostly in the wild, any tank which hosts the blue dolphin cichlids should have identical conditions to that of Lake Malawi.

The lake which hosts it in the wild is high in minerals. Evaporation helps the alkaline waters acquire these high minerals. Salt can be used to provide water filled with minerals.

It increases the carbonate hardness of the water, which would allow it to mimic the conditions of Lake Malawi. However, to provide adequate care to the fish, you need to make sure that a suitable quantity of salt is added to the tank.

Too much salt can have a severe impact on the health of the fish. 10% salt is ideal for the tank to host this fish.

While the blue dolphin cichlids can live through various water conditions, the filtration system needs to be strong to provide clean water. A lack of proper filtration could lead to various problems.

The blue dolphin cichlids are explicitly categorized as carnivorous predators in nature which feed on invertebrates and smaller fish. 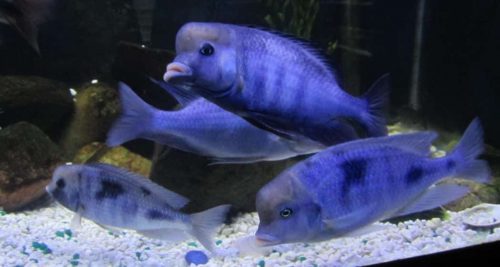 It is best to keep their diet protein-based as they will feed well on meaty foods such as prawns, earthworms, brine shrimps, and bloodworms. You can give them a variety of foods, including live and frozen foods.

In the past, it was believed that meats of warm-blooded mammals are a staple in the diet of the larger cichlids.

However, you should be careful about the type of protein you feed them as the meats of warm-blooded mammals contain certain fats and protein which do not occur naturally in the diet of the blue dolphin cichlid and may lead to diseases and even intestinal blockages.

Live feeders should also be avoided as there is a risk of disease and pathogens which may be passed onto the fish. It is advised to add vitamins and supplements to the diet of the blue dolphin cichlid. 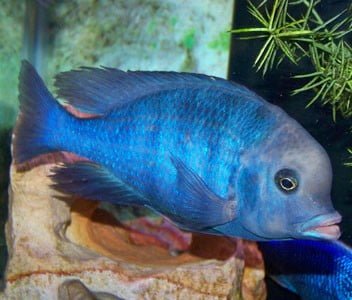 The ideal frequency of giving food to the blue dolphin cichlid should to two to five times a day rather than one large meal once a day.

The fish are hard to breed in captivity as they do not easily mate. The best way for this fish to breed is to start with six to eight juveniles that are brought up together. 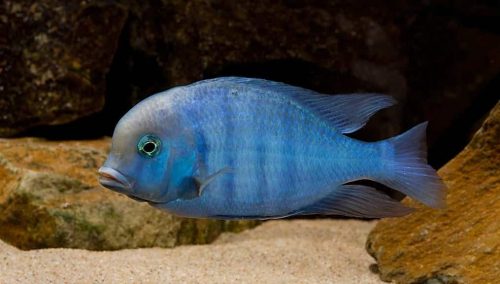 The blue dolphin cichlids are said to be at sexual maturity when they reach a length of about 5 inches. The ideal place for breeding is selected by the male, which is either a flat plate or a flat stone.

It will then dig in and make a pit, where the females would lay the eggs. The male attracts females by showing its bright colors at this spot. If a female is willing, it will approach and lay eggs at the site, which would then be fertilized by the male.

Blue dolphin cichlids are mouthbrooders, so the female incubates the eggs in the mouth. After the eggs are hatched, the female would hold 20 to 90 fry in the mouth for a period of 1 to 3 weeks.

The females are very protective of the eggs and may hold the fry in the mouth for a long period, especially at night or when the fry are in danger. 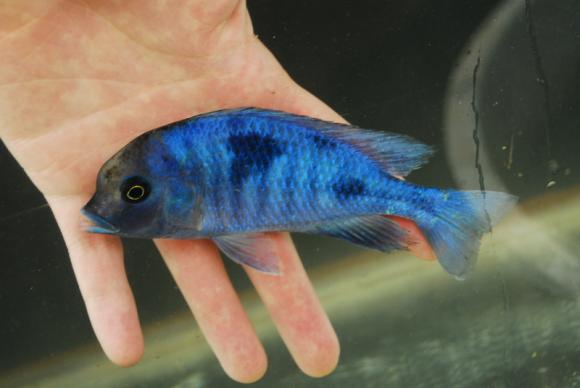 There may be a need for you to incubate the eggs for thirteen days in case the females let go of the eggs before the required period.

The blue dolphin cichlids are a peaceful breed of cichlid but not ideal for a community fish tank. They are territorial when they are spawning, so small fish should not be kept in the tank as they would be intimidated by the larger fish.

However, the blue dolphin cichlids are said to form a good ecosystem with the Malawi cichlids as well as the peacock cichlids.

The blue dolphin cichlids are prone to the typical diseases of marine life. The diseases would only grow if the water quality and oxygenation are not properly taken care of.

As with other cichlids, ich is a common disease. It can be cured by bringing up the water temperature to about 86 degrees F for about three days.

If this fails, the next step includes treating the water with copper. However, the copper is added into the water should be done after a thorough examination of the guidelines provided by the copper manufacturer. 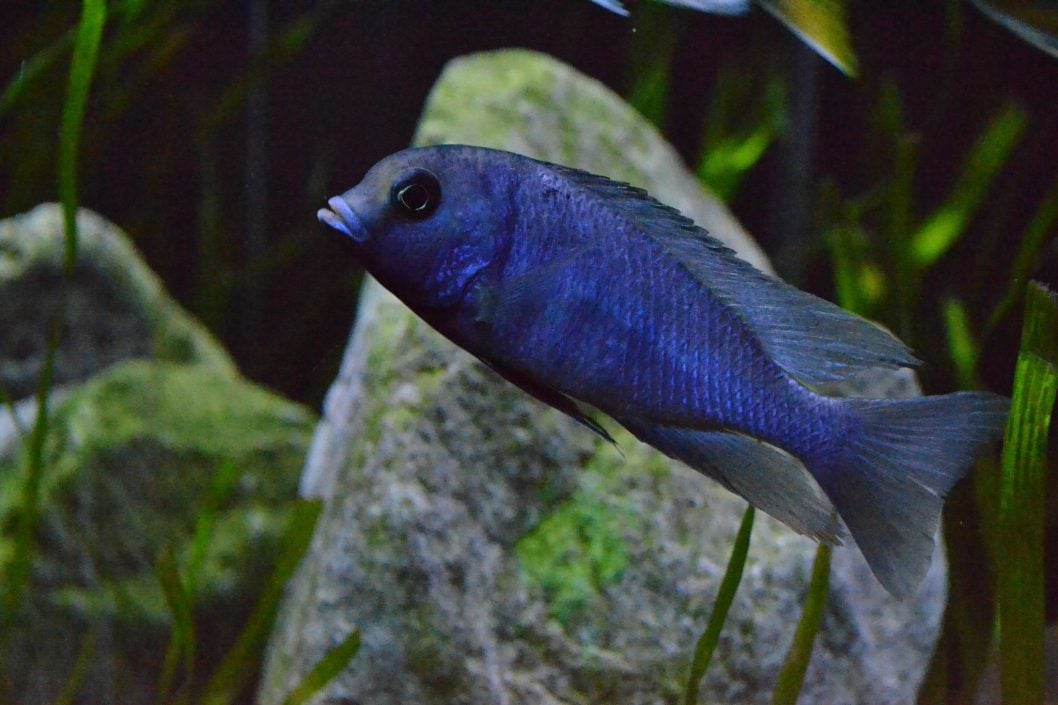 If need be, you may even undertake a copper test to ensure the correct copper levels. Caution at this step is incredibly important as high levels of copper could end up causing more harm than good.

The blue dolphin cichlids are also susceptible to worms and other parasitic infections like protozoa, bacterial functions, and fungal infections.