Gymnocorymbus thayeri is a shy fish and not as hardy as a Black Skirt Tetra. Besides, other color forms with a beautiful appearance are known. These include white tetra, and color tetra (caramel). 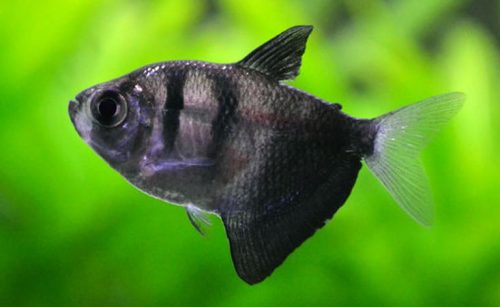 Boulenger was the first to discover these The Black Skirt Tetra (Gymnocorymbus ternetzi) at the end of the 19th century. This fish is found in South America: in the rivers of Paraguay, where it lives in the upper layers of the water.

Black Skirt Tetra has a deeply saturated color and a compressed body on the sides. This fish reaches a size of 5.5 cm in a home aquarium. Life expectancy is from 6 to 7 years. Black Skirt Tetra is easy to maintain, perfectly adapts to changes in water parameters and is an excellent decoration of the general aquarium. This aquarium fish is omnivorous.

In the wild, black tetras feed on worms, small crustaceans, and insects, but in captivity, they usually eat varieties of living, fresh, and branded foods. They also love eating Bloodworms, artemia, cyclops.

Since they are active swimmers, Tetras must live in a tank with a volume of 50 liters per individual. They love soft, peat-filtered water. Fish prefers vegetation and dark gravel as a substrate. For plants, you can choose Javanese moss, cryptocoryne, echinodorus.

She also needs an outdoor area to swim freely. The aquarium must be closed with a lid because this fish jumps well.

Keeping these black skirt tetra is possible only in clean water. Organic matter decomposes over time, nitrates and phosphates accumulate, increasing the hardness of the water.

Therefore, water must be replaced regularly (25% of the total volume) once a week. Aeration and filtration are required.

Swimming Area: this fish will swim in all layers of water.

Black Skirt Tetra is an active fish and can be aggressive towards veiled and small fish. Solitude is not recommended. In large groups, compatibility is optimal. Each fish will be focused on each other, and not on smaller fish. Like most aquarium fish, this tetra is prone to diseases of the scales, parasitic infestations (protozoa, worms, etc.), ichthyophthorosis, and bacterial infections (general).

The black skirt tetra is extremely hardy, and the disease will not appear if you provide the aquarium with quality maintenance and care.

Remember that unprocessed soil and scenery can become a source of disease. Make sure that all new fish are quarantined and that the water balance in the aquarium is not disturbed.

The dorsal fin of the male is more narrowed and longer than that of the female. A mature female is more rounded than the male. Aquarium tetras were bred in captivity, various color forms appeared later, and they have lush fins. Perfect for beginner aquarists who decide to breed fish.

For breeding to be successful, females must live separately from males for 7 to 10 days before spawning. You need to feed them with live foods in frozen form. Then they can be launched into a 40-liter tank, where a sponge filter and an aeration compressor should be installed.

Spawning water temperature, stimulating reproduction: from 27 to 30 degrees Celsius. The acidity of the medium is neutral, water hardness is below 15 dH.

Javanese moss can be put in the aquarium, which will serve as a substrate for caviar. A separator mesh is also suitable, but caviar must pass through it without damage.

The reproduction will begin when the males begin to chase. The female will lay 500 eggs for 2-3 hours. After successful masonry, manufacturers must be removed so that they do not eat caviar.

All unfertilized eggs must be removed promptly so that they do not become covered with a fungus. The larvae will hatch after 18-36 hours, and the fry will begin to swim in a few days. During the first days of life, feed with ciliates. Later, microworms and artemia nauplii can be given. The biggest problem is that fry is prone to starvation if they cannot find a food source in a dark tank promptly.

Give the fry plenty of light, day and night, until they are large enough. Then they will be able to eat the newly hatched brine shrimp.