Black Ghost Knifefish (Apteronotus albifrons), better known in the aquarium hobby as a black knife or Black Ghost Fish is a very unusual fish from the Apteronotus family.

Many fish in nature are very similar to each other in body shape. However, some species have acquired a unique structure in the process of evolution.

Such forms are very much appreciated by aquarists for their uniqueness and are frequent guests in the aquariums of exotic fish lovers.

The black ghost knife fish’s body shape is unique. It lacks the dorsal and pelvic fins, and instead has one long, stretching from head to tail and capable of undulating (undulating) movements.

Thanks to him and a pair of large pectoral fins, the fish can calmly move in any direction: forward and backward, up and down, twist, swim upside down, freeze in one place.

The fish are extremely agile and, if necessary, can develop a decent speed.

Another interesting feature of the black knife is the ability to use weak electrical discharges for orientation in troubled waters and when searching for prey.

The black ghost fish practically does not rely on sight. In the tail part, there is a special organ that generates weak currents, and numerous receptors are scattered throughout the body, capturing even the smallest changes in the electric field.

For a person, such currents are absolutely safe. It is quite possible to teach a black knife to take food by hand, but, of course, this is preceded by a long process of habituation.

Among the tribes from the rainforest of the Amazon, there is a belief that after death, the souls of people are possessed by a black knife, therefore the fish is considered sacred and is called the Black Ghost.

Although some researchers consider the legend to be fiction and argue that a similar story was invented by the first fish sellers to create the appropriate entourage around the species. ( Smart huh?)

The black knife is a rather large fish. Individual specimens caught in nature reached a size of 50 cm, while in an aquarium the fish rarely grows more than 35 cm.

The body is elongated and flattened, expands towards the head, without scales, resembles a knife blade or lancet in shape. The head is large with small eyes, the mouth is finite. In the course of evolution, the tail, dorsal, and pelvic fins have been reduced in fish.

Due to this, the fish can move in any direction. From the side, the swimming of this fish looks very graceful.

The pectoral fins are large and rounded.

Their Body-color is velvety black. A white stripe extends from the head along the back, and the stem of the tail is surrounded by two white-yellow “rings”.

Sexual differences are weakly expressed: females are smaller than males and have a more elongated abdomen; in sexually mature males, a fat lump may be present on the back of the head.

The life span of a black knife in an aquarium is 8-10 years.

The first scientific description of the black knife was made by Carl Linnaeus back in 1766.

The fish is widespread in the Amazon and its many tributaries. It can be found in Brazil, Paraguay, Ecuador, Venezuela, and Peru.

A typical biotope is a small river or stream with a gentle current and a sandy bottom.

The water in such bodies of water is often cloudy, so the fish practically do not rely on sight, but use weak electric currents for navigation. In the rainy season, mangrove forests go into flooded rivers. They prefer places with a large number of shelters and corners, where sunlight practically does not get because the fish is a typical nocturnal predator.

For a long time, black knives caught in natural reservoirs (primarily from Brazil) entered the aquariums of amateurs, which negatively affected natural populations.

However, after successful breeding experiments, the fish go on sale from special fish farms.

Keeping a black knife is recommended for experienced aquarists because the fish is quite sensitive to conditions.

They are usually kept singly or in a common aquarium with other suitable species. For an adult black ghost knifefish, an aquarium of at least 200 liters is required.

Most of the time the fish spend near the bottom. It is best to use sand or small pebbles as a substrate.

Any type of decoration is suitable for decorating the aquarium – grottoes, stones, driftwood, shade-tolerant living plants.

The most important thing is to provide a sufficient number of shelters because the fish are nocturnal and prefer to be in shelters during the daytime. 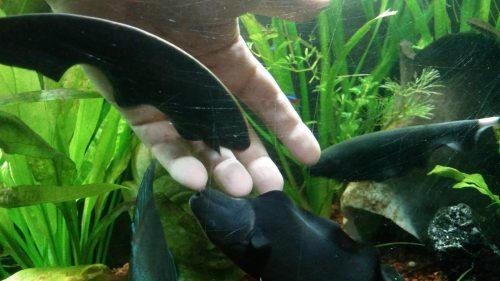 Some aquarists install large glass tubes in the aquarium, in which the black ghost fish are able to hide, but at the same time, they will be clearly visible.

The lighting in the aquarium should not be bright. Black ghost is shy fish, so it is advisable to create a dim light with the help of plants floating on the surface.

Black knives do not have scales, so they are very sensitive to nitrogenous compounds and various infections.

In the aquarium, it is necessary to organize powerful filtration and be sure to install an ultraviolet sterilizer to reduce the risk of possible diseases.

Once a week it is necessary to change up to 40% of the water in the aquarium.

The black knife is a calm fish, perfect for a general aquarium with medium and large species.

But do not forget that Black ghost knifefish are predators, so any small fish (guppies, neons), as well as invertebrates, can be perceived as food.

In relation to their relatives, the knives are set up quite aggressively, so it is better to keep the fish alone.

It is better not to combine this species with aggressive fish. Cichlids such as the Oscar fish can severely fray the fins of their neighbors.

And although they usually do not kill the knife itself, they spoil the appearance and health of the fish very much. The situation is similar with nimble barbs – fans of pinching fins.

The black knife is a typical nocturnal predator. The basis of his diet in nature is insects, their larvae, worms, other invertebrates, and fish fry.

Unfortunately, when kept in an aquarium, fish practically do not eat dry food, so you have to use frozen bloodworms, brine shrimp, pieces of fish, and seafood. 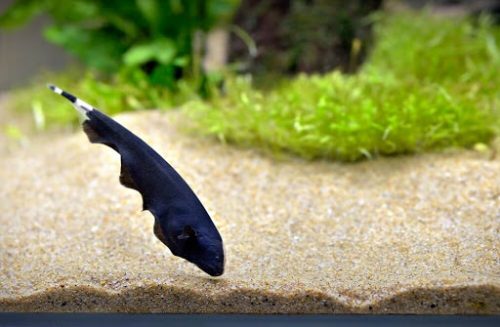 On rare occasions, Black knife fish learns to eat sinking food in the form of granules or tablets, for example, TetraMin Granules or Tetra TabiMin Tablets.

The nutritious and completely safe Tetra FreshDelica treat can be used in place of live or frozen food. You can choose from popular food organisms such as bloodworms, brine shrimp, daphnia, or krill.

It is best to feed the fish after turning off the lights, but black knives quickly get used to the feeding regime and are able to swim out even during the day.

Some fish take food directly from the owner’s hands.

Breeding a black knife is quite a difficult process because in nature spawning occurs during the rainy season when fish migrate to the mangroves.

In this case, the parameters of the water change noticeably. Similar conditions must be reproduced in the aquarium for successful breeding.

Sexual maturity in black knives occurs at the age of about 1.5 years. It is rather difficult to distinguish between a male and a female.

Males often have a lump of fat on the back of the head, while females have a rounder abdominal line.

For reproduction, you will need a spawning aquarium of 100 liters or more. Synthetic threads or a separator mesh are laid at the bottom.

Several weeks before spawning, a pair of broodstock feeds abundantly. After moving to a spawning aquarium, it is necessary to simulate the onset of the rainy season.

To do this, within a month, the water level in the aquarium gradually decreases and the temperature rises to 28 ° C.

The water also needs to be softened. It will not be superfluous to use special rain installations operating several hours a day.

In the spawning box, it is also necessary to create additional flow using sprayers and a compressor.

Spawning usually begins at dawn. Caviar is large, sticky, yellowish. The fecundity of the female can reach 500 eggs.

After the end of spawning, the producers must be placed in a different tank so that they do not eat future offspring.

Up to 50% of water is changed daily and clouded eggs are removed.

The larvae appear on the second day, and on the fourth, they move to free-swimming and are able to feed on their own.

The initially low water level should be gradually increased.

The fish grow quickly and reach 5 cm by the end of the first month of life, at the same time the characteristic color of the black knife appears.

Starting from the second month of life, it is necessary to organize a large number of shelters so that relatives do not bite each other’s tail stalk.