Betta Fish (Betta Splendens) is also known as the Siamese or the Japanese Fighting Fish. The name, betta fish, is commonly used in the aquarium trade, especially in North America.

These fish are fun to watch and beautiful to look at. 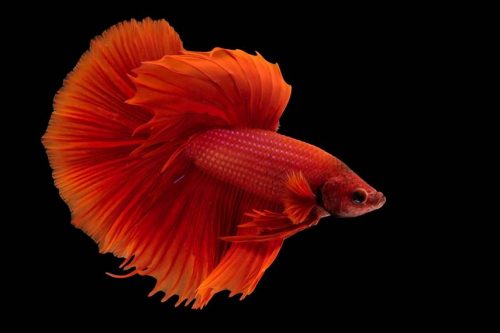 They do not require much space, especially those Betta Fish which are sold at pet stores and can be kept in a small fishbowl with other fish and plants.

These fish, with their vibrant colors, are often sold as “decorations” or even as party favors and have recently become very popular. They are sold at discount superstores, pet stores and even through online catalogs.

These fish are generally found in the Mekong basin of Thailand, Cambodia, Laos, Vietnam, and mostly at the Phraya River in Thailand.

They can also be found in the standing waters of rice paddies, canals, and floodplains. These fish are listed as “vulnerable” by the IUCN (International Union for Conservation of Nature).

Betta fish are omnivorous. Plant roots only are not adequate food for them. They generally eat insects and insect larvae.

Having a diet consisting of plant roots can keep them alive for a while, but since it does not contain proper nutrients, the fish will eventually become sick and die.

These fish feed on crustaceans, zooplankton, and the larvae of mosquitoes and other insects found in water.

When these fish are in captivity though, they can be fed a variety of pellets or frozen foods like bloodworms, brine shrimps and daphnia. They typically do not consume vegetation and are insectivores. They may, however, also consume the food of their other tank mates if it is available, even the vegetable matter.

Moreover, having a plant on top of the vase where they are kept can restrict their access to oxygen, since these fish are also known as Labyrinth fishes that obtain oxygen from the surface of the water.

The Betta Fish did not start as being “pets”. As mentioned already, they are originally from Asia, and they still live in the freshwater streams and ponds.

They have a mixed brown and green color, which helps them blend in easily with the natural habitat and not become a snack for the other fish.

Many people like to pet the Betta Fish due to their bright colors such as light blue, red, green, and yellow and for their unique tail shapes. These are the fish you generally see at pet stores.

They make quite interesting pets and can be considered as the “kangaroos” of the fish world, as they can jump out of the fish tank or the bowl if it does not have a cover on top!

These fish enjoy the warm water, and they do not require any additional oxygen to be pumped into their tanks as much other fish do. They do take in the oxygen through their gills like the others and can also breathe in the air. They often come on the surface of the water, stick their mouth out, and take a breath for oxygen. It is not unusual to see a male Betta Fish blowing bubbles, and it does that for fun, building a bubble nest.

When the female fish lays eggs, he puts those eggs in the bubbles where they will be protected until the time they hatch.

When the male Betta Fish are interested in a female, they will flare their gills, twist their bodies in dance, and spread their fins.

When the female is also interested in the male, it will grow dark in color and develop breeding bars as a response, which are like vertical lines.

The male, in turn, releases “milt” into the water and the fertilization of the eggs takes place externally. During the time of spawning, the male uses its mouth for retrieving the eggs that may be sinking and deposits them in his bubble nest. 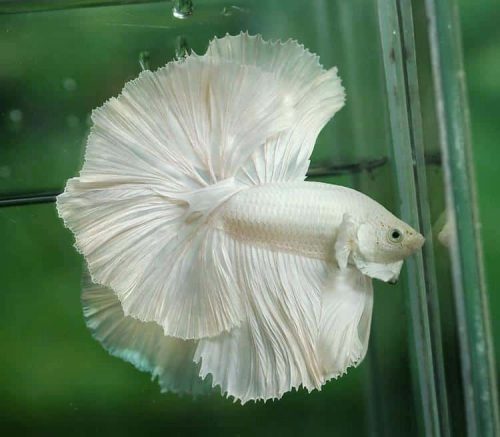 During the time of mating, the female may assist the male in this process, but many times she ends up eating the eggs she manages to catch.

Once the female has released all of the eggs, she is generally forced away from the male territory as she will end up devouring the eggs.

If the female stays in the territory, she can also be killed by the male. The eggs remain in the care of the male, where they are kept in the bubble nest. He makes sure they do not fall to the bottom.

The period of incubation lasts for about 24-36 hours, and the newly hatched larvae stay in the bubble nest for the next 2-3 days until the time their yolk sacs are absorbed fully.

Then the fry leaves the nest, and the free-swimming stage begins. They reach sexual maturity as early as 4-5 months.

Within the genus Betta, intergeneric hybridizing of Macropodus opercularis and Betta splendens has been reported. Breeders around the world are developing new types.

The male betta fish are preferentially sold at stores because of their exciting colors and beauty as compared to their female counterparts. The females never develop fins as snowy as the male ones, even when they are of the same type.

The females may also be subtler in their colors, but some breeders do manage to get females in bright colors and long fins.

When it comes to their colors, the wild ones exhibit strong colors when they are agitated, and the breeders try to make these colors permanent.

Betta fish are found to be in many different colors because of the pigmentation on their skin. Many breeders have succeeded in creating various color patterns like the butterfly, marble, and metallic shades with the help of hybridization like gold, copper, and platinum.

Some of these betta fish will even change their colors through their life span, known as “marbling”, which is attributed to transposon.

As the name betta “fighting” fish suggests, they are quite aggressive, but that does not mean they should be kept alone.

The male fish are quite territorial and like to keep in separate tanks, but some of the female betta fish can comfortably coexist.

Minnow Fish, Neon Tetra, and various species of catfish can easily cohabit with the betta fish. Any fish that is the nibbling kind should be kept out of their tanks as the betta fish have a habit of biting back. 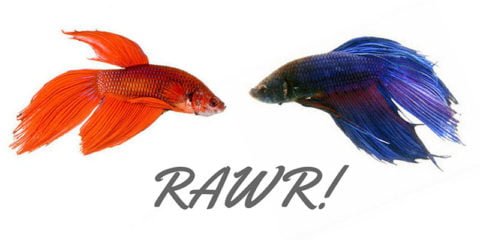 The male betta fish should not be kept with other males, and they are also not compatible with other types of color-fish species. It is, however, considered a good idea to isolate pairs for breeding purposes.

Misconceptions and other facts

They can be placed in an aquarium that contains different species of fish. This gives a sense of “community”.

Another misconception regarding the Betta Fish is that they can survive even when they are not fed in an ecosystem that has nothing other than a plant and a vase.

Due to this misconception, many of the Betta Fish are being sentenced to lonely and dull lives, which means the slow death of these fish by starvation.

The little containers where they are kept are not suitable for them at all.

These fish are preyed about by others like cats, newts, salamanders, birds, and humans who catch them for keeping in their tanks.

These fish generally live for about 2-3 years, but there have been a few cases where they have lived through their teens!

They are referred to as “plakad” in their native country Thailand and are also often referred to as the “Jewel of the Orient” due to their vibrant colors and fins.