Assassin Snail (Anentome Helena) also known as Bumblebee Snail is a freshwater gastropod mollusk native to Southeast Asia. A distinctive feature of these invertebrates is their predatory lifestyle. The basis of the diet of Assassin Snail is made up of other small snails, which they eat, literally “sucking” from the sink.

Small aquarium snails, such as ramshorn snails or Melanoides, can enter any aquarium along with plants or decorations. There are several ways to deal with these unwanted guests – mechanical collection, special preparations against snails, etc.

But the biological method is still considered the most effective and safe way, such as reducing the population of unwanted snails with the help of a predator mollusk – the Assassin Snail. 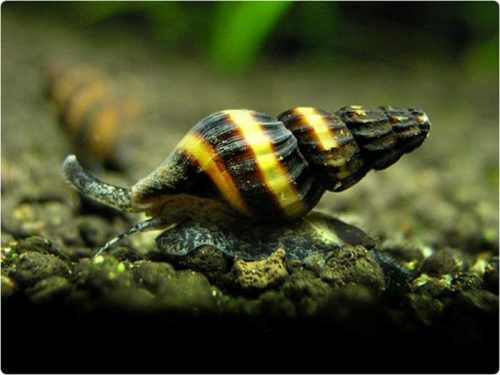 Assassin Snails are quite beautiful, their tiger color from alternating light and dark stripes look spectacular. However, the appearance of aquarists who plant these mollusks in their aquarium fades into the background.

The main value is Assassin Snail’s love for eating little brothers, which allows excellent control over the number of rapidly breeding “weed” snails (such as ramshorn snails, Physa, and Melanoides). This is a great way to get rid of unwanted guests without manually collecting and using specialized drugs. 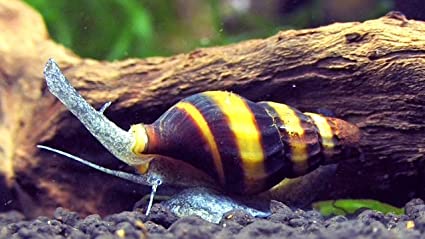 The assassin snails are small in size, the largest individuals rarely exceed 2 cm. These mollusks have an elongated conical shell with a ribbed surface.

It is decorated with alternating stripes – yellow and black. The body itself is gray with dots. Near the mouth of the snail is a small partition that allows them to close their entrance in case of danger.

Anentome Helena’s leg is quite long, with its help this invertebrate moves quickly. When moving, a long breathing tube is also clearly visible.

The mouth has an unusual structure: it is modified into a small proboscis, with the help of which the snails penetrate the victim’s shell and suck out the mollusk located in it. 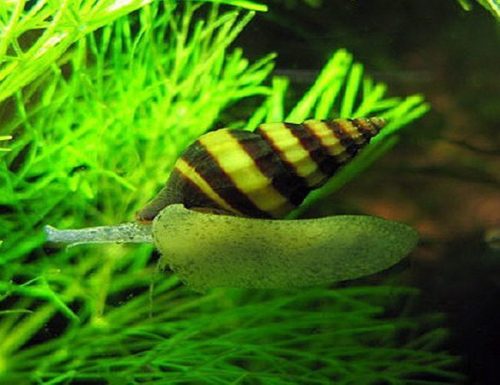 The average lifespan of Assassin Snail in an aquarium is two years.

Assassin Snails are not widespread in Southeast Asia (Indonesia, Thailand, Malaysia). They can be found both in rivers with clean running water and in lakes. Snails live at shallow depths. The substrate is preferred sandy or silty.

Keeping Assassin Snail in the home aquarium is not difficult as these snails are hardy and easy to care for.

Mollusks, due to their size, can live in aquariums with a volume of 3-5 liters (per individual), but the capacity of 15-20 liters will be most optimal.

Particular attention must be paid to the soil. It is best to stay on coarse sand or fine rounded pebbles up to 2 mm in size.

This is due to the fact that after feeding, These snails have a habit of partially digging into the ground. “Soft” substrates will not damage the delicate integument of these mollusks.

To ensure clean water and maintain a comfortable environment, the aquarium should be equipped with a good filter and compressor. 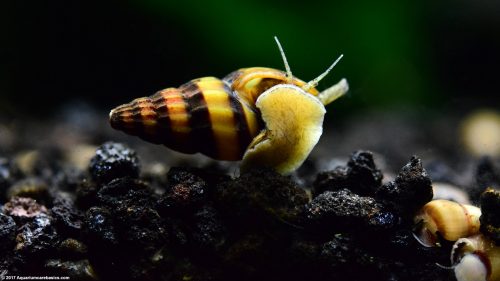 The temperature regulator does not hurt, because the snails are thermophilic and most active at a water temperature of 23-27 ° C.

In aquariums with Anentome Helena, you can plant any kind of aquarium plants as these snails are completely indifferent to them.

Assassin Snail should not be kept in very soft or acidic water. Lack of minerals and increased acidity adversely affect the development of the shell. The optimal values ​​are: GH = 8-15, pH = 7.0-8.0.

Snails are completely freshwater, there is no need to add salt to the water. It is strongly not recommended to use preparations containing copper in an aquarium with Bumblebee Snail, because it is harmful to aquarium invertebrates.

Choosing tank mates in a common aquarium for Assassin Snail is not the most difficult task. Any decorative fish, be it tetras, zebrafish, or barbs, get along well with snails. There is a common misconception that these predatory snails are able to attack and eat fish.

Fortunately, the speed and agility of Assassin Snail is not enough to hunt fish. The maximum that they can do is gnaw at the corpse of a dead fish.

It is not recommended to keep these snails with small shrimps, freshly molted young crustaceans that have just molted out can get her for lunch. 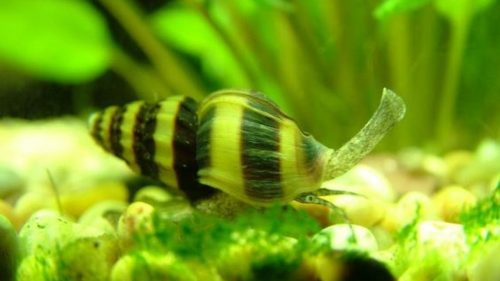 Do not keep Assassin Snails in an aquarium with predatory cichlids, these fish sometimes do not mind eating small snails. And of course, it is necessary to exclude from the list of cohabitants fish species that feed on snails like Pea Puffer Fish, Clown loach, etc.

The Assassin Snails themselves are dangerous for other species of small snails ( ramshorn snails or Melanoides, etc.). There should be no compatibility problems with adult snails ( Ampullaria Snail, neritina snail, etc ), These snails rarely attack a victim that exceeds them in size.

In the natural habitat, Assassin Snails feed on other snails or carrion.

Most often, Anentome Helena is kept into the aquarium in order to destroy highly multiplying small snails – they will make up their diet for a while. When searching for prey, These snails choose different tactics. In some cases, they pursue their victim, in others, they ambush and wait patiently.

If all the “weedy” mollusks are eaten or they are not in the aquarium, then Anentome Helena can’t do without additional feeding. Since the snail is a predator, it needs high protein foods.

Reproduction of Assassin Snails in the aquarium is not a troublesome task, but surprisingly long. Yes, and special fertility from these mollusks can not be expected. Snails are dioecious, but to distinguish the male from the female in appearance does not work.

Therefore, you will have to maintain a decent group to increase the chances of meeting heterosexual individuals. An interesting fact is that the Assassin Snails after pairing are kept close to each other.

At the end of the mating process, the female lays eggs on a solid substrate, similar to transparent cubes with a yellow ball inside. Incubation takes 20-30 days and largely depends on the temperature of the water.

After hatching, young Assassin Snails burrow into the ground, where they spend the next six months. They will appear in the light only after they grow up to 3-5 mm.

Assassin Snails are extremely healthy mollusks that do no harm in the aquarium. But their benefits are huge because they quickly enough help aquarists get rid of an excessive population of small aquarium snails.

At the same time, they are peaceful, do not touch fish and other large snails, and are also indifferent to aquatic plants.

Flowerhorn fish also known as flowerhorn cichlid is an interspecific hybrid of several South American cichlids obtained by breeders from...