Acei cichlid (Pseudotropheus Acei) also known as Yellow Tail Acei is from the Northwestern coast of Lake Malawi from the Bandawe Point to Ngara in Zambia, Africa. These fish are beautiful to look at with their striking yellowfins and slender blue body.

This can be one of the ways to tell the gender apart. 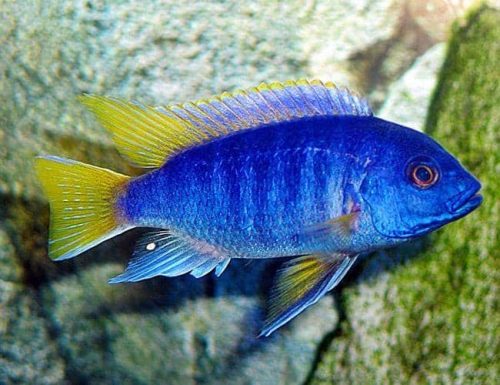 Acei cichlids are not fond of very bright lighting. As such, their aquarium should not have too much glare.

They mostly live in shallow waters, but sometimes go towards the surface, which is uncommon for the Mbuna cichlids.

Regan first discovered them in 1922, and it was originally believed to be a Pseudotropheus, and then it was changed to Gephyrochromis and then back again to Pseudotropheus.

When it is in the lake, a school of around 30 to 50 individuals around a large log is a common sight of these fish. In the rocky areas though, only about 3-10 would be found.

Acei cichlids are quite active and good-natured and stick to only occasional mock fights.

They can, however, be the bully or even the one being bullied in the water tank depending upon who they are living with, in the aquarium. This yellow-tailed acei cichlid was known for being one of the least aggressive species and because of this and their striking colors; they have become one of the most popular choices for mbuna cichlids.

In the mature fish species, their deep violet colors are highlighted by their yellow fins which makes it stand out.

They are also one of the few freshwater fish to sport a purple color that has made them quite popular by those keeping a community of the mbuna.

A larger tank is suggested for the larger sized fish, and they usually prefer sandy and rock-filled shoreline where they can access sunken logs. The acei cichlids have quite a long intestine which means they can even live off a few bites of algae each day.

These fish are however at a high risk of a disease called the ‘Malawi Bloat’. They are equipped with teeth that are cusped like and are flat for removing epixylic algae from the wood.

The Acei Cichlid species are herbivores, and when they are in the natural habitat, they feed on algae-covered rocks and submerged wood.

They are also known for grazing on different types of aquatic vegetation, which makes them not the ideal candidate for the planted aquarium environment as most African cichlids.

They are, however, also able to eat tough plants such as Java Ferns and many other Anubias plant species.

Most people provide these fish which quality herbivore flakes or pellet food and also with supplemental algae wafers and the naturally occurring algae which grow on the rocks and the wood of the aquarium decor. 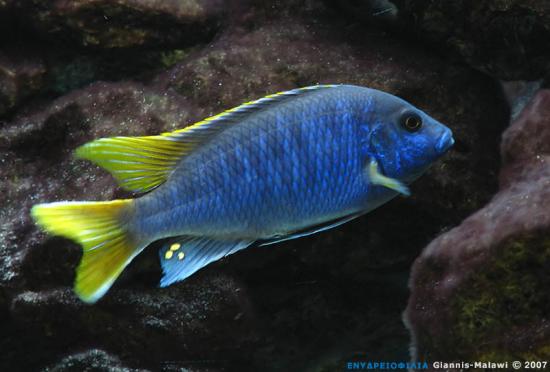 Acei cichlid is however quite sensitive in their dietary needs. They require a large amount of vegetable matter to do well.

Giving them a diet of commercial algae wafers, blanched vegetables and spirulina will help to keep them active and healthy.

However, if they get too much protein in their daily diet, their digestive system will not work well, and they are quite susceptible to bloating and other related problems.

It takes a lot of dedication and effort in breeding the acei cichlids, but it may also be a simple process for those who have experience.

The key to a successful spawn is having the right number of males and females.

If the tank size is less than 100 gallons, then there should only be one dominant male in the tank, for every three to four females. 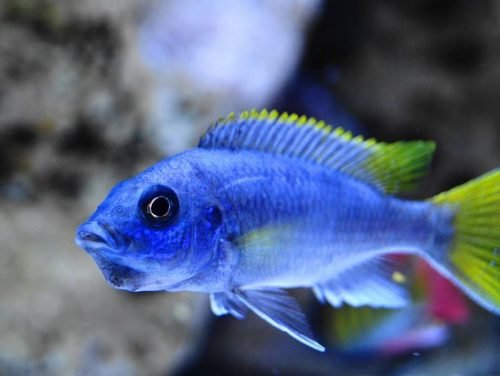 The acei cichlid males, however, are quite likely to coexist easily as compared to the other mbuna, and it depends upon the layout of the tank and their unique temperaments.

The sex of these fish is not easy to tell apart, and the only method is venting the fish. This can, however, be quite stressful and intimidating for the fish keeper and the fish as well.

With prior experience, venting becomes easier after giving it a try a couple of times.

Most of the time, the best idea is to raise a large group of acei cichlids to adulthood and allow them to form a harem of their nature and any fish which are getting beaten should be removed.

It is also not a good idea to keep only one male and female as the female would be harassed continuously and will not be in the mood.

Once the right group for breeding is made, they would take care of things on their own as long as they are cared for.

It is good to have a sandy substrate for them where they can dig pits and have flat rocks for spawning sites. 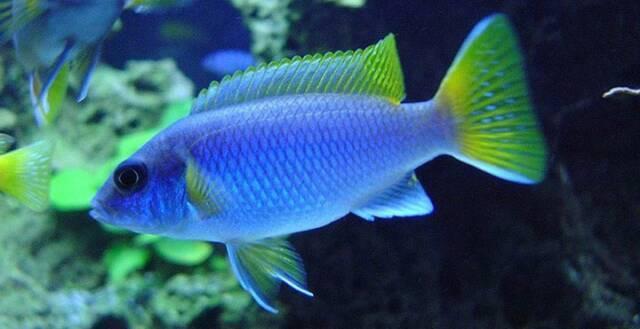 Like other mbunas, the female will lay eggs and then scoop it in her mouth to be fertilized by the male. The female stimulates the male to fertilize the eggs.

The average holding time for the female is about three weeks, and during this time, it does not eat. The females can have about fifty fries per spawning, and this number can vary depending on their experience and size.

It is essential that during this period the female does not become stressed and weak or else she may end up swallowing the fry.

Once the eggs are done with the incubation, the female will spit them out, and then they are left to fend for themselves.

The PseudotropheusAcei is a widespread species and surely a great chance for the beginners as well as for the advanced hobbyists alike.

They are readily available in local stores as well as online, and they sell at a reasonable price.

There are only a few of the freshwater fish which have a purple color such as these fish and as such, it makes them highly sought after by those keeping a community of mbunas.

The acei cichlids prefer a tank that has a lot of hiding places with rocks.

Acei cichlid prefers to live in the bottom part of the tank and is not fond of large open areas of water that has intense lighting.

These species are also one of the only mbuna ones who eat algae off from the rocks and the driftwood.

As such, it is advisable to include some driftwood in their water tank for them to graze on.

It is essential to replicate the water conditions of their natural habitat, which means extremely alkaline water with high mineral content.

It is crucial to make routine water changes as well of at least 30% of the water either twice a week or at least once to keep the fish healthy.

If the water conditions are poor, then Acei cichlid is quite susceptible to diseases which include the Malawi bloat which may even be fatal. There is not much known about this disease. However, once contracted it is quite difficult to treat it.

It is known to be caused by a protozoan parasite which multiplies when the fish has consumed an improper diet or is under stress.

The protozoan multiplies so much that it ends up causing blockages in their intestines so neither gas not food can pass through.

This bloat eventually damages their swim bladder, their liver, and their kidneys so much, that they end up dying within 24-72 hours.

They are one of the mellow mbuna. They, however, prefer to be with their kind in the aquarium.

It is advisable to have one mature male to several females in one tank, as the males may fight relentlessly. It is, however, difficult to tell the sexes apart. Very large and aggressive mbuna species should be avoided in their tanks, such as the crabs and the kenyii which ends up terrorizing the acei cichlids the point of death.

They can also be housed with fast semi-aggressive fish such as rainbow cichlids and tiger barbs, but it may not be the ideal choice since there is a difference in the water chemistry for both.

Having a tank with saulosi, rusty cichlids, johanni and yellow labs should be a great one with color and activity.