African Cichlids (Cichlidae) are known for their colorful scales and the warm feeling they give off once you set your eyes on them.

African Cichlids are the perfect little creatures to have swimming the aquarium at your home, restaurant, or office. It doesn’t just keep things exciting but also relaxes you overall.

The need for an aquarium in a brand-new place is one felt by many homeowners. Aquariums somehow add to the ambiance if you desire the place to be a relaxing one.

They also add color as several of the fish insides have beautiful vibrant colors that people can’t get enough of.

What are African Cichlids?

Africa is known as the cradle of civilization, with millions of different creatures walking on land and in the sea. The African cichlids are one such species that belong to the Cichlidae family and are well known for their colorful scales. There are 1500 variations in the species, and each species is unique and as beautiful as the next. Although known as the African Cichlids, the cichlid family is also found around the South American coastline as well as in some parts of Asia. Some of their kind live in saltwater while the rest occupy freshwater sources.

Most of the Cichlids found in Africa are in the three great water sources. These include Lake Victoria, Lake Malawi, and Lake Tanganyika.

Lake Malawi is known to possess the most beautiful of their kind, and many of the African Cichlids that belong in aquariums around the world come from this water source.

Why Are They Popular?

African cichlids are popular because of the variations in their colors and their exotic vibe. Having just one in your aquarium alongside the rest of your regular fish will make you see the difference in a matter of seconds.

While the light shines bright on the fish’s scales, you couldn’t help but wonder if the place that the African Cichlid is from is as beautiful as the fish itself. The benefit of over 1500 different variations in their kind means each fish would have its separate patterns; hence can be kept as an exotic pet in any aquarium.

The second reason as to why they are popular is that despite their beauty, nature has made these creatures quite strong.

They can survive any amateur mistakes and can easily be transported over long distances. Fragile fish often die during travel resulting in a loss for their owner.

Owning the African Cichlids means securing a sure bet, which raises its value.

Another reason as to why these fish are so popular is because they dwell well with the other fish in an aquarium.

The African Cichlids are a social fish and can fit into just about any aquarium with no stirrups in the waters. You won’t be seeing any fish claiming their territories or killing each other over territory or for food because they work well with other fish.

Take a good look inside of the fish store to get the right one for yourself. You want your African Cichlids to lighten up the mood in your establishment and provide a peaceful vibe that most aquariums are capable of.

There are more than 1,900 species of Cichlids. They are famous for their gorgeous body color. This is why many people love them, but cichlids are opportunists and predators.

Some of them hide by the rocks, some bury themselves in the sand. Some even pretend to be dead, and the gill cover also stops stretching, waiting for a visitor to prey on it.

Because they love fighting, many people have to give up breeding. In the rock lake area of ​​origin, the water area is wide, the terrain is complex, and there are many caves. The weaker side can hide in a ridge.

Lake Tanganyika cichlids come from Lake Tanganyika, located on the west side of the Great Rift Valley in East Africa, and is the second deepest lake in the world.

The lake is surrounded by limestone, the lake is clear, the lake is extremely high in minerals, and the pH value is also high (7.5-9.2).

Therefore, in the breeding and reproduction of the species from Lake Tanganyika, care should be taken to provide alkaline hard water suitable for survival. Representative breeds include Tropheus Cichlids, frontosa cichlid, Neolamprologus, etc..

Lake Malawi cichlids, from Lake Malawi, are located in the southernmost part of the Great Rift Valley of East Africa and the third-largest lake in Africa. The lake is subject to wind and rock disintegration so that Lake Tan is not clear.

Lake Victoria cichlids come from Lake Victoria, located in central Africa, across the equator, the largest lake in Africa and the second largest freshwater lake in the world.

How Much Do African Cichlids Cost?

The African Cichlids are priced in an effortless manner. The more patterns it has and the more beautiful the fish is, the more it is priced.

Some species can go off for as little as $5 while other rarer ones are known to go for $100 or above. The price is also dependent on the size of the fish. The larger the fish, the more satisfaction it will provide its owner because of the larger scales, hence being more expensive.

How Long do African Cichlids Live?

The species have varying ages. Some die in as little as 3 to 4 years while others last longer for up to 8 to 10 years, provided that you have taken care of the essentials (cleaning, filtering water, ensuring proper diet, other fish for company, and enough room for all the fish to coexist). The African Cichlids and other fish are living creatures, and they deserve as much respect and the right to live as they would have in their natural habitat.

You can even add in several native objects that make the fish feel at home. This has been proven to enhance life expectancy for a whole year.

The African Cichlids are a very active species that tend to cause some trouble for their owners in the beginning.

Maybe because when you imagine fish in an aquarium, it sounds very dull, and you don’t expect some of them to jump out of the aquarium once or twice.

This is due to their active nature and their energy when they are quite content. The African Cichlids also have another characteristic, which is that they are always hungry. No matter how well you feed them, they will always move about in the water to the slightest of ripples in the hopes of being fed.

This shows intelligent behavior as they are quick to learn how to earn their fair share of food so much so that they end up eating the food of the other fish in the tank. Be careful not to overfeed them, though.

This can shorten their lifespans as they become big and fluffy and still be hungry for more.
Another characteristic of these fish is that they are only aggressive when it is mating season.

They have been known to kill other weaker fish in that period when all of their social vibes vanish, and they are left bloodthirsty.

You can mitigate the effects of their aggression by adding in space for other fish to hide. These can be old toy pirate ships or rocks that have holes in them that provide suitable hiding spaces for other smaller fish.

Lastly, these fish have a lot of extra energy, so don’t be surprised if you find holes on the ground inside of the aquarium. It is the fish trying to find food for themselves.

Hopefully, that shouldn’t cause too much problem for you unless you have placed some objects inside the tank that can damage the fish.

General Appearance of the African Cichlids

African Cichlids offspring are very different from their adult versions. They generally start showing color after three months to about a year when they mature into their actual state.

This can again vary from species to species.

The appearance is everything when keeping the African Cichlids. Their exotic vibe can only be genuinely manifested when you keep the fish as healthy as possible, which means not feeding them too much.

Their scales are brightest when it is time to mate, and the males get aggressive over the females, showing dominance through the color of their scales.

This is natural behavior where males try to appear more attractive to females in order to mate with them. 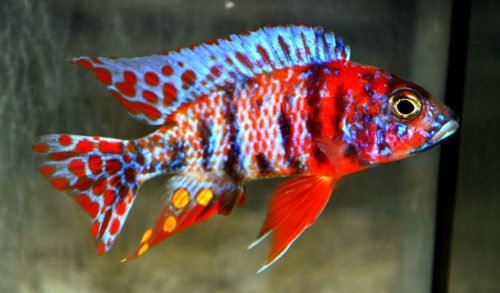 All the African Cichlids consist of small teeth, and some have even developed larger ones based on their size.

This is mostly to scrape off the algae that grow on the side of the tank or any other food that is edible for them.

Other than that, you will find the Cichlids to be in the colors blue, red, yellow, green, or purple. The African Cichlids also have various patterns, such as a redfish with white polka dots or a blue one with yellow lines running through the middle.

Some rarer species can even change color depending on the type of water conditions they are exposed to.

What is Their Diet?

The African Cichlids are omnivores, which means they can eat both meat and vegetation that grows in the aquarium or sprinkled onto the surface.

The African Cichlids can eat the usual household vegetables.

Cut a carrot into tiny pieces and throw them into the tank for them to nibble on. If you want something more conventional, you can always opt for fish food from the market, although processed food does hinder the health of your fish. More natural substances such as insects, vegetables, and pieces of meat can help it grow healthier in no time.

A proper diet will increase the life expectancy as well as the beauty of these creatures tenfold.

Keeping them in a clean environment, and if you can order substances from their own habitat from where they came from, can produce an even better effect.

However, this can become too expensive, and you may have to rely on the traditional, homegrown methods to get by.

The African Cichlids, like any other species of fish, are one of the most diverse in the market and are mostly kept as exotic showpieces in aquariums.

You can buy the kind of colored African Cichlids that best go with your theme to make it more profound and refreshing to look at.

Taking care of your fish can help produce value in the investment, and having the fish mate can ensure you get many more of these fish that you can, later on, resell to other buyers interested in keeping these fish in their aquarium.

Buying a rarer species means taking even more care not to overfeed or disturb their habitat.

Some African Cichlids can be sensitive to change also if it involves taking a fish out of the aquarium or turning the food you give them. You will find the results to be different.

Hillstream Loach is a small freshwater fish that is also known as Borneo Sucker, Gastromyzon Punctulatus, or butterfly loach. It...